CEDARBURG, Wis. — When Michael Hicks and his daughter chalked “Black Lives Matter” on the pavement outside their suburban home, someone scrubbed it away within hours.

Then Mr. Hicks put up a Black Lives Matter sign on his cul-de-sac, only to find it tossed in a dumpster. He finally tried sticking signs in his garden, but a neighbor complained, and he removed them to avoid harassment.

“They just seem to want to silence you in these suburbs,” said Mr. Hicks, who commutes from a condo in Grafton, Wis., to a Milwaukee school, where he teaches health and physical education. “They’re so happy in their comfortable bubble.”

As many suburban Americans reject President Trump, threatening his re-election like no other bloc of voters, the suburbs outside Milwaukee, among the most racially segregated in the country, remain a bulwark of support.

The well-educated, affluent counties north and west of the city have for decades delivered Republican landslides, defying a Democratic shift in suburbia in other Northern states.

Voters such as Mr. Hicks’s neighbors seem to cleave to the president even more tightly as he has stoked fears of “anarchists” and “looters” imperiling the suburbs, including after the unrest in nearby Kenosha. Their enduring support is one reason Wisconsin offers Mr. Trump a still-open path to re-election, even as his opportunities in other battlegrounds have dwindled.

For at least two decades, demographic changes in most American suburbs — an influx of nonwhite, well-educated and younger voters moving out of cities or immigrating from abroad — have pushed former Republican strongholds to become Democratic-trending regions.

In Pennsylvania, the president is trailing Joseph R. Biden Jr. by double digits in the vote-rich suburbs of Philadelphia. In Michigan, the decisive swing to Democrats by suburbanites in Oakland County, outside Detroit, gives Mr. Biden a statewide edge. In Arizona, the Phoenix suburbs helped Democrats win a Senate seat in 2018 and are the knife edge on which the state is balanced.

But in the region outside Milwaukee, including both inner suburbs and exurbs, Mr. Trump led Mr. Biden by 48 percent to 38 percent in a recent Marquette Law School Poll.

“The WOW counties are key,” said Scott Walker, the former Republican governor of Wisconsin, using the nickname for the three Milwaukee suburban counties of Waukesha, Ozaukee and Washington.

Mr. Walker said in an interview that the president’s warnings, usually in lurid terms, of civil unrest that would ensue under a Democratic White House were working to solidify wavering suburban Republicans, who four years ago were lukewarm to Mr. Trump.

He described a group of five couples that he and his wife, Tonette, have known since they were young parents in Wauwatosa, a Milwaukee suburb. Mr. Trump’s tone and personality repulsed the wives, he said, adding that his wife “would say to me, ‘He’s in trouble.’” But that is no longer the case.

“A number have completely changed their minds since Kenosha,” Mr. Walker said.

For their part, Wisconsin Democrats point to how they have cut into Republican margins in the suburbs in elections since 2016. They may not be persuading many Republicans to vote for Mr. Biden, but they are turning out supporters and volunteers who are new residents or were less active voters. Mr. Biden led in Wisconsin by five percentage points in a recent New York Times/Siena College Poll. 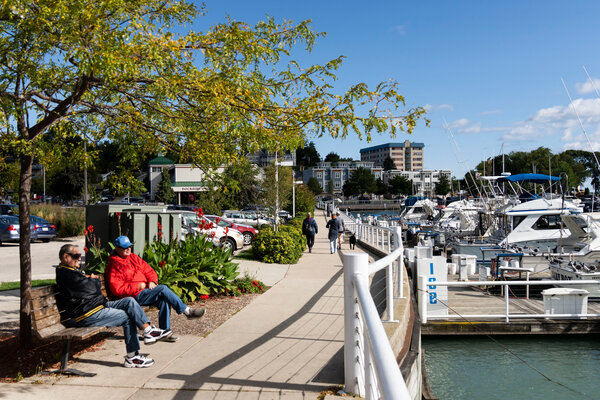 By some measures, greater Milwaukee is the most racially segregated metropolitan region in the country.

Waukesha County, the most populous of the three suburban counties, is 92.5 percent white and less than 2 percent Black, figures that have not budged in the last decade, according to the census.

“If you had to find a part of the country that is an example of white flight, Milwaukee would be a poster child,” said Barry Burden, the director of the Elections Research Center at the University of Wisconsin-Madison.

During the Great Migration, Black residents arrived later to the city than to Cleveland or Detroit, Dr. Burden said, and newly built interstate highways in the 1960s made it easier for higher-income white people to move out of the city and commute to work.

“There was an extremely sharp line right at the Milwaukee border,” he said.

The segregation has seemed to play into Mr. Trump’s racist messaging around what he calls law and order, which he amplified on Sept. 1 during a visit to Kenosha after buildings were burned and businesses looted after the police shooting of a Black man, Jacob Blake.

“They’re all young kids and they’re Black, they’re just troublemakers,” David Sorenson, a white suburban voter, said of the protesters, while overlooking that a white teenager who had previously expressed support for the president has been charged with killing two people during the protests.

Mr. Sorenson, 80, lives in Muskego, which has a big population of Norwegian descent.

“If I went into Muskego and tried to paint ‘Make America Great Again’ on the street, I wouldn’t get very far,” he insisted. He dismissed Black Lives Matter. “They’re agitators,” he said.

Keith Wetherell, a Biden supporter, called Mr. Trump’s claims of upholding law and order “a double standard” given the way his administration has trampled on democratic norms, including sowing false doubts about illegal voting in the coming election.

Both men said they feared putting up Biden yard signs because they would be stolen or might lead to a rock thrown through a window.

Heightened emotions are fueling what both parties expect will be record turnout, but there is also anxiety over the hatred both sides say they feel from partisans of the opposite party, unlike in any past election.

Across the suburban counties, where homeowners on riding mowers attack lawns as big as pastures, there are plenty of yard signs for both presidential candidates. A new feature is that Trump/Pence signs are paired with others proclaiming “We Support Law Enforcement” or “Back the Badge.”

A voter named Rachel, whose one-story house flew a QAnon flag from a pole, said at her front door that the president was trying to make a difference. “It’s just he’s up against so much, so much opposition,” she said.

Declining to give her last name, Rachel, 36, said she believed the QAnon conspiracy theory, which falsely claims that Satan-worshiping top Democrats are running a child sex-trafficking ring that Mr. Trump is secretly battling. “Which is probably why they’re fighting him so hard,” she said.

“The people for Trump don’t listen to the mainstream media,” said Karen Jeske, 61, who quit her job in public relations to volunteer full time for the Waukesha Democratic Party. “They have a wall up. How do we get through to them?”

She added, “The best use of my communication skills right now is to do everything I can to get Trump out of office.”

She is dismayed to the point of sleepless nights by hostility she encounters from Trump supporters in replies to text messages she sends on behalf of her party.

“The vileness, I can’t explain,” she said. She quoted several. “Die slowly,” said one. Another read, “I don’t even like Trump but I’d vote for him 100 times over again just to drive a knife into the heart of your soulless mission to pervert our beautiful country.”

“Trump could have done a lot to bring the temperature down, but he loves this divisiveness,” Ms. Jeske said. “It will help him get ahead. I think he’s right. I think Donald Trump’s message of ‘I’ll keep you safe’ is resonating with too many people.”

“People are coming out of the woodwork,” he said. “People are concerned about the Covid epidemic, health care and a president that divides people rather than bringing people together.”

Four years ago, Mr. Trump actually underperformed in the Milwaukee suburbs. Its college-educated conservatives preferred Republicans like Mr. Walker, who pushed Wisconsin rightward after he became governor in 2010, or Mitt Romney, the party’s 2012 presidential nominee.

In Waukesha County, Mr. Trump received about 20,000 fewer votes than Mr. Romney did. The president, who won Wisconsin by less than one percentage point, carried the state by driving up support in rural places among voters without college degrees, mainly white men.

Since 2016, suburban Republicans have fallen in line with Mr. Trump, party officials said. Mr. Walker, once a grudging Trump supporter, has become a cheerleader.

The president “delivered on big issues that people care about in those WOW counties,” Mr. Walker said, ticking them off: reining in the federal government, tax cuts, an anti-abortion record.

Robyn Vining, a Democrat who flipped a suburban Republican seat in the State Assembly in 2018, said Mr. Trump’s efforts to stir fear about crime and civil unrest had hit a wall. Polls seem to bear that out.

The Marquette survey this month found that approval of Mr. Trump’s response to protests rose among Republicans after he visited Kenosha, but changed only slightly for other voters.

“Most people I talk to are very well aware that we are living in Trump’s America,” Ms. Vining said. “To argue that changing the president would create more of the same does not make sense to the people I talk to.”

Bridget Donovan, a self-described Democrat, intends to vote for Mr. Trump. She said her top two issues of concern were climate change and health care, and she was well aware of Mr. Trump’s efforts to undermine environmental regulations and repeal the Affordable Care Act.

She said she had been “counting the days until Trump is out of the White House” — until the killing of George Floyd in May by the Minneapolis police, which caused protests to erupt around the country.

For her, the presidential race pivoted at that point, said Ms. Donovan, 53, who had worked with crime victims in a prosecutor’s office and has family members in law enforcement.

“Instead of being rational about it and looking at ways the criminal justice system could be changed, right away they started burning and acting like lunatics,” she said of protesters.

She dismissed the Black Lives Matter movement. “I think it’s just a kind of guise for looting, burning, committing acts of violence against the police,” she said.

Ms. Donovan, who is white, objected to a Biden ad airing in Wisconsin in which the former vice president is the only white person to appear. “To me the definition of racism is excluding a race,” she said.

She has found herself tuning in on YouTube to Black conservative commentators such as a former police officer named Brandon Tatum, who argues that “white privilege” is a myth.

A vegetarian who has donated to People for the Ethical Treatment of Animals, Ms. Donovan said she loves animals and taking her dog for walks around Waukesha.

President Trump will name his Supreme Court pick on Saturday, and he appears to have the G.O.P. votes he needs. The election is six weeks away.

Early voting for the presidential election starts in September in some states. Take a look at key dates where you live. If you’re voting by mail, it’s risky to procrastinate.

Keep Up With Our Coverage

Get an email recapping the day’s news

Related posts:
Hot News
Live: Holidaymakers warned to prepare for queues heading home
Billy Te Kahika quits Advance NZ party
Brit expat ‘had sex with wife then stabbed her 11 times in frenzied attack’
Nova Scotia Mi’kmaq chief casts doubt on Ottawa’s bid to quell violence over lobster
Colorado wildfires: Snow hits Cameron Peak, should move to East Troublesome Sunday afternoon
Recent Posts
This website uses cookies to improve your user experience and to provide you with advertisements that are relevant to your interests. By continuing to browse the site you are agreeing to our use of cookies.Ok