Boris Johnson’s adviser has quit after a video showed her joking about a Christmas Party at Downing Street last year while London was under Tier 3 restrictions.

Allegra Stratton said she had offered her resignation to the PM less than 20 hours after the video emerged.

Trying to hold back the tears, former ITV journalist Ms Stratton offered her “profound apologies” for joking about the alleged party during a rehearsal for a news conference in which other aides asked her about the gathering, said to have taken place on 18 December last year.

However, she sidestepped the issue of whether the party did actually happen while households in London were prevented from mixing indoors.

She said: “The British people have made immense sacrifices in the battle against COVID-19.

“I now fear that my comments in the leaked video of the 20th of December have become a distraction from that fight.

“My remarked seemed to make light of the rules, rules that people were doing everything to obey. That was never my intention.

“I will regret those remarks for the rest of my days and offer my profound apologies to all of you for them.”

She added: “I understand the anger and frustration that people feel.

“To all of you who lost loved ones, endured intolerable loneliness and struggled with your businesses – I am sorry and this afternoon I have offered my resignation to the prime minister.” 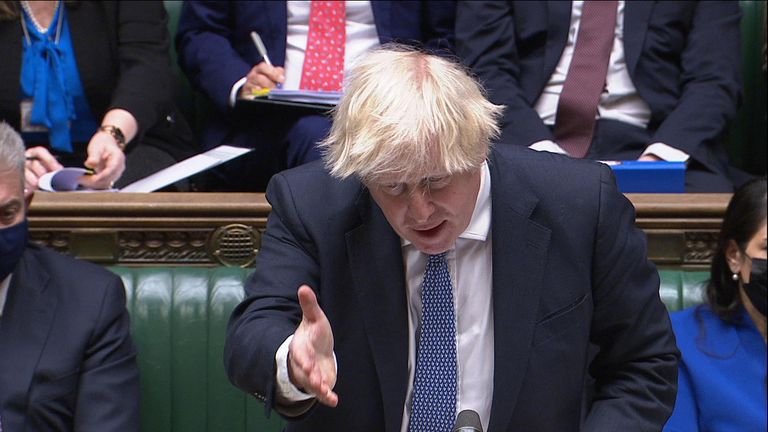 Ms Stratton said working in government is an “immense privilege” and that she “tried to do right by you all”.

She added that said she was proud of what was achieved at COP26, as she was the government’s spokeswoman for the climate change conference in November.

In the footage of Ms Stratton from December last year, senior Number 10 aides can be heard jokingly referring to a “business meeting” and a “cheese and wine” event.

Earlier on, Mr Johnson apologised for the video and said he was “furious” as he revealed he has asked Cabinet Secretary Simon Case to investigate whether the party took place, despite him being told he was “repeatedly assured” it had not.

He said if rules were breached “then there will be disciplinary action for all those involved”.

And he agreed to provide the Metropolitan Police with any information the government has about parties in Downing Street. The force has said it is aware of the footage.

Before his appearance at Prime Minister’s Questions on Wednesday, Mr Johnson had insisted COVID rules were followed “at all times” in Number 10 but had dodged questions about whether or not a party had taken place.