Alex Salmond, 66, is a Scottish politician who served as First Minister in Scotland from 2007 until 2014. He was the leader of the Scottish National Party (SNP) for more than 20 years, serving two terms. The Scottish politician resigned from the SNP to fight allegations of sexual misconduct which he has continually denied. He was charged with 14 offences but was acquitted of all charges after trial. An inquiry into how the Scottish Government handled complaints against him is currently ongoing. Express.co.uk has compiled a list of the key interactions between Mr Salmond and Nicola Sturgeon ahead of the inquiry.

Scottish ministers ordered a review of the Scottish Government’s “policies and processes for addressing inappropriate conduct” in the wake of sexual harassment scandals around the world, particularly in the showbiz and political industries.

Allegations against Mr Salmond were raised with the SNP by Sky News.

The Scottish First Minister said she had spoken to Mr Salmond and he had denied it.

No further action was taken at that time.

Ms Sturgeon signed off the Government’s new process for dealing with complaints of sexual harassment and misconduct. 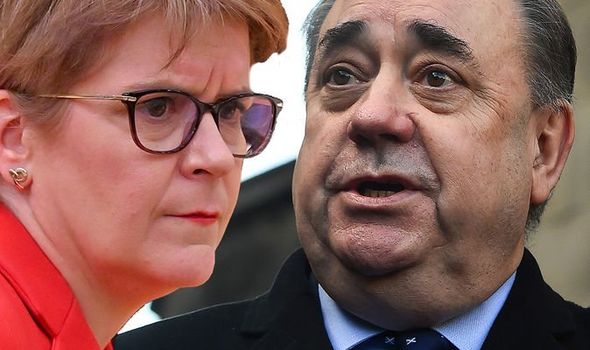 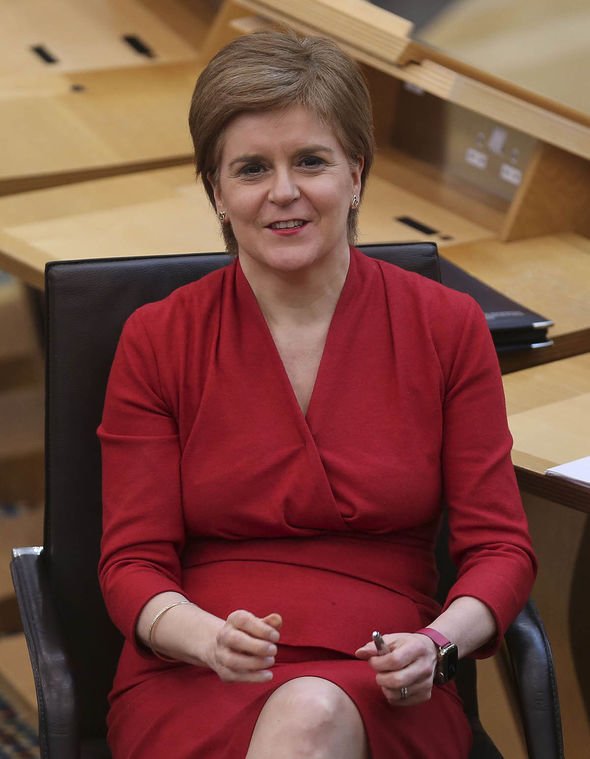 Two female members of staff made formal complaints to the Scottish Government about Mr Salmond’s conduct, dating back to when he was First Minister in December 2013.

An internal inquiry was established and an investigating officer appointed.

Mr Salmond was told about the investigation.

During this conversation, the pair discussed the possibility of a meeting between Ms Sturgeon and Mr Salmond.

Ms Sturgeon said, after initially forgetting about this meeting, there was the “suggestion that the matter might relate to allegations of a sexual nature”.

On April 2, Ms Sturgeon and Mr Salmond met at her home in Glasgow.

The First Minister’s chief of staff, Liz Lloyd, was also present at the meeting, during which Mr Salmond revealed he was under investigation.

Ms Sturgeon insisted the meeting was about party business, rather than anything related to the Scottish Government.

On April 23, Ms Sturgeon and Mr Salmond spoke on the phone. 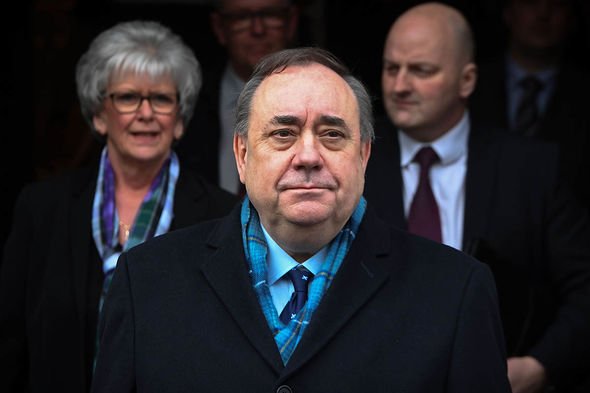 On September 14, a judicial review was launched after complaints were made by Mr Salmond.

This review was entirely separate from the Government’s investigation.

The Scottish government confirmed it will contest Mr Salmond’s judicial review in court on September 20.

A spokesman said: “We are confident that our processes are legally sound, and we will vigorously defend our position in court.”

The judicial review called in court for the first time for a preliminary hearing on November 6, with a full four-day hearing fixed for the following January.

Mr Salmond scored an early legal win in a preliminary court hearing, forcing the government to hand over documents related to its investigation. 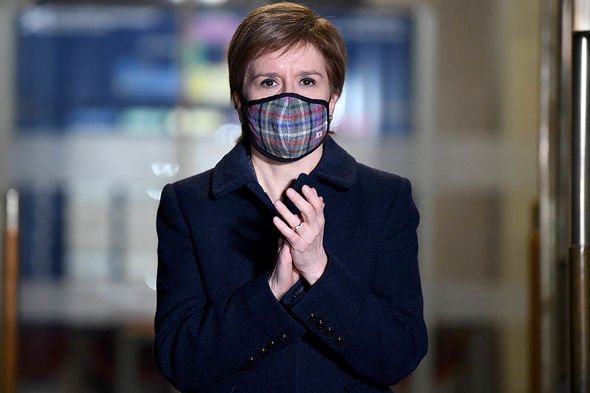 On January 8, one week before the full judicial review is due to begin, a hearing was abruptly called at the Court of Session in Edinburgh, where the government conceded defeat.

The Scottish Government’s lawyers accepted the investigating officer appointed to the case had had previous contact with the complainers, invalidating the whole inquiry.

Lord Pentland ruled the investigation’s reports should be set aside, and the Government promised not to publish or disseminate them.

Ms Evans released a statement apologising to “all involved” for the collapse of the investigation, blaming a “single procedural flaw”.

She said the process itself is still “robust”, adding complaints against Mr Salmond could still be reinvestigated – after the police probe is complete.

Mr Salmond repeatedly called for Ms Evans to consider her position, saying she is responsible for an “abject humiliation” and a “surrender” on the part of the Government.

She also told MSPs she was first informed about the allegations and probe by Mr Salmond on April 2.

On January 10, Ms Sturgeon denied being part of a conspiracy against Mr Salmond or colluding with him during the probe, during questioning from opposition parties.

The Conservatives called for a parliamentary inquiry into the “botched” investigation, while Labour claimed Ms Sturgeon had broken the ministerial code, and formally called on her to refer herself to the independent panel overseeing it.

Mr Salmond reported the Government to the data protection watchdog after details of the allegations against him appeared in the media.

On January 13, Ms Sturgeon referred herself to the independent advisors to rule on whether she breached the ministerial code in her meetings with Mr Salmond.

The next day her spokesman accused Mr Salmond’s team of “an attempt to smear the First Minister” through newspaper stories, amid claims that Ms Lloyd knew of the complaints ahead of the April 2 meeting.

On January 15, MSPs agreed to hold a Holyrood inquiry into the government’s handling of the complaints against Mr Salmond.

Police Scotland arrested Mr Salmond, charging him with 14 offences, including two counts of attempted rape, nine of sexual assault, two of indecent assault, and one of breach of the peace on January 24.

Mr Salmond appeared in court on November 21 and entered a plea of “not guilty”. 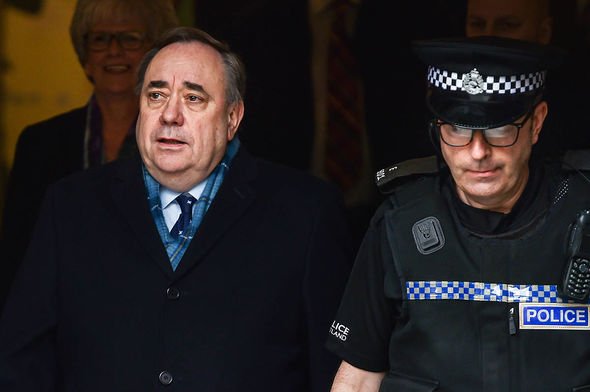 Mr Salmond’s trial began on March 9 and on March 23 he was found not guilty on 12 charges, not proven on one charge and one was withdrawn by the crown.

The former First Minister was, therefore, cleared of all sexual assault charges and his supporters subsequently demanded a full inquiry into the Scottish Government’s handling of the scandal.

On October 7, Ms Sturgeon claimed she had “forgotten” about her meeting with Mr Aberdein on March 29, 2018.

She added she had “nothing whatsoever to hide” over Holyrood’s Alex Salmond inquiry.

Later in the month, Mr Salond called for a probe into whether Ms Sturgeon breached the ministerial code to be extended.

The Scottish government missed a deadline to hand over legal advice it received ahead of a judicial review of its botched handling of complaints against Mr Salmond.

The Holyrood committee investigating the affair had given a deadline to disclose the advice, but the Government failed to supply this advice in time.

Mr Salmond accused Ms Sturgeon of misleading parliament, calling evidence she gave to an inquiry into the handling of sexual harassment claims against him “simply untrue”.

He refused to appear at Holyrood in January, despite being urged to do so.

On January 24, Ms Sturgeon appeared on the Andrew Marr show during which she denied misleading the Scottish Government regarding the trial.

She said her “forgetting” to tell MSPs about her meeting with Mr Salmond’s aide on March 29, 2018, did not mislead the investigation.

If Ms Sturgeon is found to have broken the ministerial code she would – under normal circumstance – be expected to resign as the First Minister.

The High Court in Edinburgh ruled Mr Salmond’s evidence claiming his former chief of staff met with Ms Sturgeon on March 28, 2018, to discuss sexual assault allegations against the former first minister can be released.

Mr Salmond pulled out of an opportunity to give evidence on February 24 but has now offered to appear before MSPs on Friday, February 26.

The move came after the parliament withdrew and then republished a revised version of one of Mr Salmond’s submissions to the inquiry.