WASHINGTON — Memorials to the war dead of the 20th century are among the central attractions in the nation’s capital. So it has always been notable that one of the most consequential American conflicts, World War I, lacked national recognition.

Now, as the United States withdraws from its longest war, a memorial that recognizes one of its most complicated ones officially opens in Washington on Friday, after years of tangling among preservationists, urban planners, federal officials and the commission that realized its creation.

The first flag will be raised at the memorial in Pershing Park, near the White House — rather than along the National Mall, where many supporters had envisioned — on a spot once used for ice skating, cocoa sipping and midday sandwich nibbling by hurried office workers who sat under the crepe myrtles. Fights over the memorial’s location, accuracy and scale have been part of its journey.

“Our objective was to build a memorial that would stand shoulder to shoulder with other monuments and elevate World War I in the American consciousness,” said Edwin L. Fountain, the vice chairman of the World War I Centennial Commission, “at the same time recognizing that unlike those memorials, this has to be a memorial and an urban park.”

The only original nod to the war in the park, a statute of Gen. John J. Pershing, who commanded the American Expeditionary Forces in Europe, will remain at the edge of the space. But the memorial’s central focus is a large wall that will hold its final feature: a 58-foot bronze sculpture that is either a bold testament to the significance of the mission or a detraction from its natural setting, depending on the point of view.

The design, restoration of the original park and construction of the new memorial will cost $42 million; the commission has $1.4 million left to raise.

The sculpture, “A Soldier’s Journey,” tells the story of one American’s path from reluctant service member to returned war hero through a series of scenes featuring 38 figures. They are meant to convey the story of the country’s transformation from an isolationist to a leader on the world stage, with a final visual reference to the next big war. The piece has had its own journey from New York to New Zealand to the Cotswolds in England, one involving live models in period dress and thousands of iPhone photographs and other technology to capture the models in movement.

Critics — many of whom fought Mr. Fountain’s concept with every tactic available — say the structure falls short in marrying a historically significant park with a big-dream memorial.

“The real question is: Did the memorial leverage the power of place in which it now resides?” said Charles A. Birnbaum, the president of The Cultural Landscape Foundation, who tried to have the park added to the National Register of Historic Places, which trimmed the memorial planners’ large-scale plans. “Did it succeed in integrating itself in a place in a federal city that is unique in having to serve tourists and residents?” 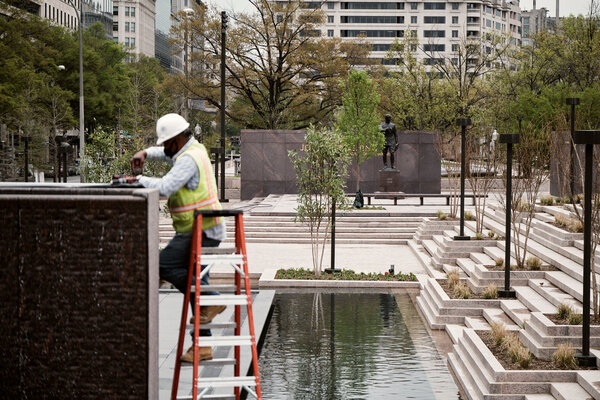 The park, which was designed by M. Paul Friedberg, a prominent landscape architect, and built in 1981, had fallen into disrepair by the time ground broke for the memorial in 2017. A popular ice rink closed in 2006 because of mechanical issues and never reopened; its nooks and crannies were littered with garbage and pigeons that favored eating it.

It was, admittedly, no one’s first pick for a memorial site. Disputes of a very Washington nature engulfed the efforts.

Representative Ted Poe, Republican of Texas, tried for years to expand the memorial effort on the National Mall before he retired. Congress considered transforming the District of Columbia War Memorial, at the end of the mall, into a national monument. Washington officials fiercely opposed this, as did lawmakers from Missouri, who did not want competition for the National World War I Museum and Memorial in Kansas City. The Interior Department was also not keen on the project.

In 2014, Congress decided on Pershing Park. In 2016, Joseph Weishaar, a 25-year-old architect, and Sabin Howard, a classicist sculptor in New York, were chosen to create the giant sculpture after winning a design competition.

“I was doing very myopic, classical male figurative sculpture derived from Hellenistic art,” Mr. Howard said. “Neither one of us was ready. It is just insanity. You are entering into this process that could take away 15 years of your life.”

But given the location of the memorial, the pace moved decidedly faster than those on the National Mall, despite multiple reviews by United States Commission of Fine Arts and other federal agencies.

Mr. Howard began in 2016 by hiring models — as well as his daughter Madeleine, who played the role of the young girl in the sculpture — who dressed in period clothing and acted out battle scenes as he took 12,000 pictures on his iPhone in a studio in the South Bronx. The project continued in New Zealand, where Mr. Howard used special technology to make movie props to create the first mock-up for the commission’s review.

Next, he and his models packed up for the Cotswolds, where he used a special foundry to begin his sculpting work, which is now being completed in his studio in Englewood, N.J.

Mr. Howard said he was conscious of making the sculpture visually engaging but also educational. “My client said, ‘You have to make something that dramatizes World War I in a way in which visitors will want to go home and learn more about it,’” he said.

Accuracy gave way, however, to artistic license. The piece, which depicts Black, Latino and Native American soldiers, blurs the reality. In a meeting with the commission in 2018, Toni Griffin, a member, noted that Black soldiers did not typically fight alongside white soldiers in World War I, as shown, and suggested that “the sculpture should depict the authentic experience,” according to the minutes from the meeting.

While Mr. Howard changed the helmets of the Black troops to reflect that, he said he was unmoved by the broader argument. “You had segregation in the Army ” he said in an interview. “However, on the battlefield, there is no distinction.” As such, even if Black soldiers were depicted in a way that was historically incorrect, he said, “they needed to be treated as equal stature.”

In a notable coincidence, the memorial is opening to visitors during a pandemic not unlike the flu outbreak that killed thousands of troops in the trenches during the war. “Flu was not on my mind,” Mr. Howard said. “What was on my mind was pro-human agency upliftment.”

The memorial is unlikely to quell longstanding criticism that too many monuments in Washington focus on war and death.

“There are stories that have been marginalized that could have been celebrated and sobering stories of the reality of the war experience that could more effectively honor sacrifice,” said Phoebe Lickwar, who was a landscape architect in the early stages of the project. “Instead, we’re presented with a trite narrative and a glorification of battle.”