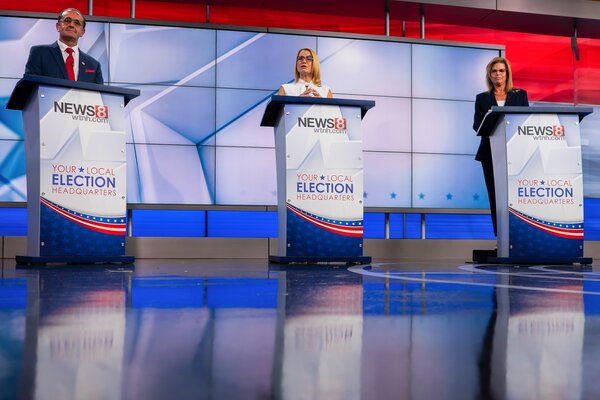 In Connecticut, a three-way primary will decide which Republican will challenge Senator Richard Blumenthal, a Democrat in his second term, who remains favored but whose job approval has slipped below 50 percent.

The Republican field is led by Themis Klarides, a moderate who supports abortion rights and was the first woman to become House Republican leader in the state.

Both of her rivals — Leora Levy, a Republican National Committee member from Greenwich who was endorsed by Mr. Trump, and Peter Lumaj, an immigration lawyer who fled communist Albania — received enough support at the party’s convention in May to qualify for the primary.

They have sought to portray Ms. Klarides, who earlier explored a run for governor, as hewing to the left on reproductive rights and gun control and have questioned her solidarity with Mr. Trump, should he run for president again and be elected.

Ms. Levy, 65, whom Mr. Trump nominated to be the U.S. ambassador to Chile but whose confirmation languished in the Senate, has gone so far as to call Ms. Klarides the next Liz Cheney in a campaign email.

But in Connecticut, where Republicans have not won a statewide election or congressional race since 2006, Ms. Klarides has panned the strategy of her conservative rivals.

To dislodge Mr. Blumenthal from the seat he has held since 2011, Ms. Klarides has said, it will take a moderate Republican like herself who has a track record of winning elections. She has cast doubts about whether Ms. Levy and Mr. Lumaj can appeal to voters not affiliated with a political party, who make up Connecticut’s largest electoral bloc.

Neither of her opponents has ever won an election.

Mr. Lumaj, a perennial candidate who previously ran for governor, has accused the Cuban-born Ms. Levy of going through a political transformation, from a top Republican fund-raiser who had previously voiced her disdain for Mr. Trump to a MAGA candidate.

Ms. Levy received a late endorsement from Mr. Trump, putting him on her speaker phone in the middle of a Republican meeting she was attending in southeastern Connecticut.

Mr. Blumenthal, 76, one of the Senate’s wealthiest members and Connecticut’s former longtime attorney general, is known for his omnipresence at news conferences, ribbon-cuttings and parades. But his slipping job approval rating comes amid an already difficult midterm election environment for Democrats.

His toughest Senate campaign was in 2010, when he defeated Linda McMahon, the professional wrestling mogul who went on to serve in Mr. Trump’s cabinet. In that race, Mr. Blumenthal was accused of misrepresenting his military service during the Vietnam War, when he was a Marine Corps reservist but did not see combat. Mr. Blumenthal said at the time the he never meant to create the impression that he was a combat veteran and apologized.

Ms. Klarides has her own connection to the W.W.E., the entertainment giant that Ms. McMahon has helmed with her husband, Vincent McMahon, who recently left the company. While she was studying for the bar exam after law school, Ms. Klarides, a former model and fitness competitor, worked as a “ring girl,” carrying placards in between rounds of wrestling matches.