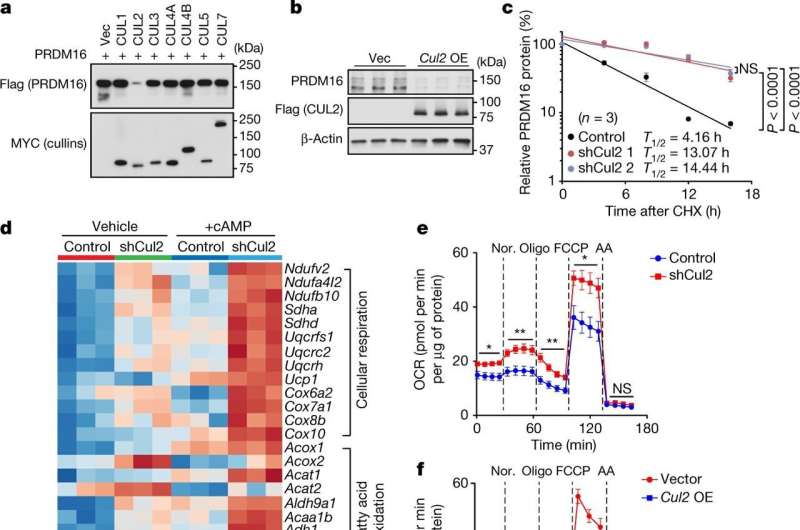 A growing body of evidence suggests that brown and beige adipose tissues are protective against metabolic disease, such as insulin resistance and diabetes. Increasing production, or biogenesis, of the energy-burning beige fat has been linked to substantial improvement in metabolic health. Now, researchers at Beth Israel Deaconess Medical Center (BIDMC) have developed a transformative approach to make more of this kind of cell. They identified a key enzyme, Cul2-APPBP2, which catalyzes the degradation of PRDM16 protein, a potent activator of beige fat biogenesis. The work is available online in the journal Nature.

“The most well-known approach to induce beige fat biogenesis is chronic cold acclimation; however, chronic cold acclimation may be unsafe due to elevated blood pressure, besides the fact that cold exposure is uncomfortable to most people,” said corresponding author Shingo Kajimura, Ph.D., a Howard Hughes Medical Institute investigator in the Division of Endocrinology, Diabetes & Metabolism at BIDMC. “This work provides a completely new solution by suggesting a model of how beige adipocyte biogenesis is controlled.”

Based on previous work suggesting that the protein PRDM16 played a key role in beige fat biogenesis, the researchers conducted a series of experiments to determine how the protein turnover was controlled in white fat cells in mice. A discovery ten years in the making, Kajimura and colleagues identified the key enzyme—an E3 ligase complex named CUL2-APPBP2—that breaks down the protein in fat cells.

In the absence of the E3 ligase complex, the PRDM16 protein activated the heat-producing genes that are characteristic of beige fat—counteracting diet-induced obesity, glucose intolerance, insulin intolerance and abnormal blood levels of fat in mice. The scientists also observed that the protein repressed damaging pro-inflammatory genes in the fat cells, suggesting another route by which brown and beige fat contribute to metabolic health.