After a five-year struggle with fertility problems, Kemi Olowe was focusing on the joys of motherhood with her nine-month-old son, Samuel, when she felt a lump in her right breast.

Kemi, vicodin sale online then just 32, wasn’t unduly worried as she assumed it was a blocked milk duct, which is a common problem during breast-feeding if the baby fails to latch on properly or the breast tissue is irritated.

‘I thought the lump would go down once I’d stopped breast-feeding,’ says Kemi, a mortgage broker from Essex.

But it didn’t. So four months later, she went to see her GP.

After two ultrasound scans she was diagnosed with breast cancer, with a 6cm stage 3 tumour (meaning it had spread, in her case to the lymph nodes, which are part of the immune system). A mastectomy, six months of chemotherapy and six weeks of radiotherapy followed.

Although it was her persistence in seeing her GP twice that resulted in her diagnosis, ‘my thoughts never went to cancer’, says Kemi. ‘I thought it was only old people who got cancer.’

In women who are aged 35 to 49, breast cancer is, in fact, the most common cause of death in the UK, accounting for 712 deaths a year. 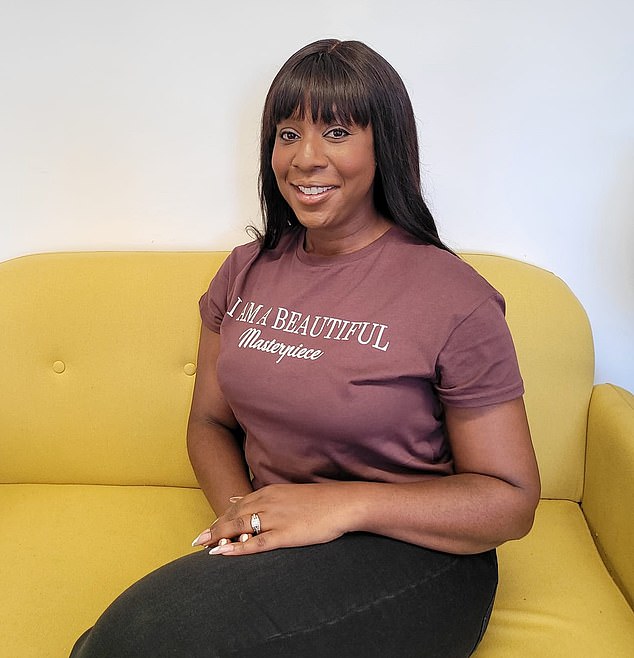 Kemi, then just 32, wasn’t unduly worried as she assumed it was a blocked milk duct, which is a common problem during breast-feeding if the baby fails to latch on properly or the breast tissue is irritated

However, it is primarily a disease of the over-50s, ‘who account for 80 per cent of all breast cancers’, says Nicola Roche, a consultant breast cancer surgeon at the Royal Marsden Hospital in London.

‘When you’re in your 20s and 30s, if you find a lump it’s most likely to be a fibroadenoma [a benign, slow-growing, solid breast lump]; in your 40s it’s likely to be a cyst; and only in your 50s is it more likely to be cancer.’

This is because our cells become damaged over time, and as we age our bodies are less able to fix it.

‘But younger women often have more aggressive cancer,’ says Miss Roche, adding that mammograms aren’t routinely performed on women under 40 as their breast tissue is very dense, which makes it harder to detect a lump.

However, all breast lumps must be checked, no matter how young the patient.

‘You’re not expecting cancer with a young patient,’ says Miss Roche. ‘Your levels of suspicion will be higher with an older patient, but all lumps must be checked and every woman encouraged to know what her breasts are like and if they’ve changed.’

Kemi also dismissed the idea of cancer as she wrongly assumed her ethnicity protected her. She says that, as a child, she ‘watched TV soaps and when a character had breast cancer, it was never a black person so I thought cancer didn’t affect black people’.

Studies have long shown that women from black ethnic backgrounds have a lower risk of developing breast cancer, but a lower five-year survival rate if they do have the disease.

Miss Roche explains: ‘Young black women have a lower incidence of breast cancer, but when they get it, it tends to be more aggressive. Women from ethnic minority groups may also present late with breast cancer symptoms because of socio-economic and cultural reasons.’ 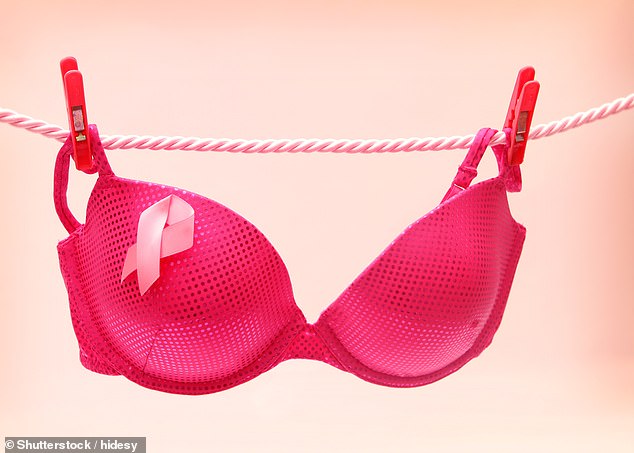 In women who are aged 35 to 49, breast cancer is, in fact, the most common cause of death in the UK, accounting for 712 deaths a year

Kemi first went to her GP in January 2018. ‘He couldn’t find the lump although I could physically hold it,’ she says.

‘He referred me for an ultrasound and the radiologist said it was just milk drying up. I felt I was wasting NHS time, but it felt like it was growing nearer to my armpit.

‘In July, I spoke to a female GP over the phone and was sent for another ultrasound. It was the same radiologist doing it. She asked why I was back and, on scanning, said nothing had changed.

‘Then a medical student, who was in the room, started asking questions and pointing things out on the screen. I’m so grateful for that student — she might have saved my life as I went immediately for a biopsy.’

Kemi had a mammogram the next day and then a bone scan. She didn’t understand what it was for — ‘I was too scared to ask’ — but now knows that with advanced breast cancer, the most likely place for it to spread is the bones.

Two weeks later, Kemi went with her husband, Peter, 37, a businessman, to see a consultant.

‘The nurse was holding a folder marked breast cancer, but I didn’t realise she was going to give it to me,’ she recalls. ‘When the consultant said I had breast cancer, I froze and then had a panic attack. All I could think was: “My son, my son.” He wasn’t even two then.

‘My family cancelled my dad’s surprise 60th birthday party that evening. They came to ours instead, and I cried while they comforted me. The next day I decided I must do what I needed to do to fight this. I went to the gym and then I had my hair and nails done, and I put on my make-up every day.

‘We’d forgotten we had private health insurance. So three days later we had an hour-long consultation with the same doctor who had diagnosed me.’

Within two weeks of her diagnosis, Kemi had five lymph nodes in her right armpit removed (the lymph nodes in the armpit nearest the tumour are the most likely first place for cancer to spread). One node was affected, so she was advised to have a mastectomy.

Kemi and Peter then went to Guy’s and St Thomas’ Assisted Conception Unit in London to talk about IVF and freezing embryos for a sibling for Samuel (who was born after four rounds of IVF).

‘As I had an oestrogen-receptive cancer [driven by the hormone], they asked if I wanted hormones going into my body to stimulate me [to produce eggs],’ she says.

‘Peter and I looked at each other and said: “We’ll get back to you.” In the car, we talked about how grateful we were to have Samuel, but I want to stay alive for him, so we decided not to go ahead.’

Kemi knows of no breast cancer in her family, ‘which is why this was such a shock’, she says. ‘Twice my consultant referred me for genetic testing, and it was rejected both times because of my age.’

Miss Roche says that women diagnosed with breast cancer in their 30s but without a family history of the disease would normally be offered genetic testing.

‘There is at least a 10 per cent chance that there is a fault in the BRCA1 or BRCA2 genes, and that has implications for treatments and decisions,’ she says.

‘For instance, the woman might decide to have a double mastectomy to reduce the risk of breast cancer in the future.’

Before her mastectomy in September 2018, Kemi and her sister, Temi, who is eight years her junior, went to a ‘bra meeting’ at NHS Broomfield Hospital, in Chelmsford, where post-surgical volunteers stood, topless, so that women could see the results of various techniques and quiz the volunteers. The meetings are held twice a month and anyone can attend.

‘It was so emotional,’ says Kemi. ‘Even the women whose new breasts had been done a long time ago, whose results were variable, were getting on with their lives.’ She also had a cheering encounter with an assistant at an M&S store, when she went to buy special bras to wear after surgery.

Kemi recalls: ‘I started crying and this woman, an angel who reminded me of Barbara Windsor, took off her uniform and showed me her reconstructed breast. “This is me, 25 years on,” she said.’

Six months after surgery, Kemi began six months of chemotherapy, the first 12 weeks of which were the most gruelling.

‘Mum moved in with us,’ she says. ‘She had to shower me and take me to the loo, as I had no energy. My hair had gone within two weeks.’

The radiotherapy sessions in spring 2019 were much easier.

‘I even went to a wedding after having a session in the morning,’ she says.

Kemi was supported after diagnosis by the charity Breast Cancer Now with ‘such helpful information’ that she has in turn helped with its Tickled Pink campaign with Asda this month.

Her chosen message, ‘I am a beautiful masterpiece’, based on a Bible verse from Ephesians in the New Testament, has been printed on fundraising T-shirts.

Four years since her diagnosis, she says she is ‘super happy and grateful to be alive’.

‘It’ll be five years next July, and that’s when we will celebrate,’ she says. ‘I see a consultant and have scans annually and I check the other breast a lot. I want to help make people aware that breast cancer is not just an old person’s disease and that everyone must check their breasts.’

Kemi’s T-shirt is on sale at selected Asda stores and online at george.com this month.

For information on checking your breasts, visit: nhs.uk/common-health-questions/womens-health/

This week: A pillow between your legs reduces hip pain

‘If you have hip pain, the worst position you can sleep in is on one side with one leg straight and the other leg thrown over it,’ says sleep posture expert James Leinhardt, from bedding company Levitex.

This position makes the hip turn towards the bed and causes tension in the very muscles you want to relax.

‘There’s an easy way to change things though,’ says James. ‘Get a pillow and place it between your knees and your ankles, so it supports your upper leg all the way down.

‘This creates a straighter spine and avoids pulling around the hip. You may not be able to stay like this all night, as we do move around while we sleep, but even if you start off this way and stay there for an hour it will help.’

Sometimes when you do this, you may notice more tension around your neck and shoulder. If this is the case, move your top pillow so it perfectly fills the space between your earlobe and the mattress.