When your kid has to go potty while you’re out, it can definitely be stressful. Usually, it involves taking your child into the restroom with you so you can offer help, and keep them from peeking into other stalls or licking the floor — you know, typical parenting stuff. Nobody has ever batted an eye when I’ve brought my sons into the restroom with me (because other moms just get it!), but this one dad on Reddit has a serious problem with his wife bringing their son into the women’s restroom…and things got heated.

In the “Parenting” subreddit, seroquel v. risperdal a mom complained about her husband’s ridiculous expectations of their 5-year-old son.

“So everytime me, husband and 5 year old boy are out at a resturaunt or store, and my son needs to use the restroom , I immediately take him to the women’s restroom and wait outside his stall,” the mom wrote. NBD, right? Except, her husband is super dramatic about it. “My husband has mentioned a couple of times to me now how he’s old enough to use the men’s restroom independently at this point. That I don’t have to be waiting outside the stalls for him and ‘hovering.’”

First of all, waiting outside the stall door for a 5-year-old isn’t hovering. Secondly, if the son doesn’t have a problem with it and the mom doesn’t have a problem with it, what is this dad’s problem? My 5-year-old has asked to use the restroom alone before, and I’ve stood outside the men’s waiting on him, even knocking and peeking my head in to check because I don’t fully trust him not to play in there. Most of the time, I just take him with me because it’s so much easier! Not to mention, it could be a safety issue, which seems to be this mom’s biggest problem.

“But I really do not feel comfortable with that,” the mom continued. “I personally think 5 is still too young to go to the restroom unattended by an adult. And everywhere I go, women don’t seem to mind my boy is using the women’s restroom, in fact,they are the nicest about it. Most don’t blink an eye. I tried to explain to him that it’s more of a safety thing as well. But our convo got me thinking if I’m doing the right thing.”

In an effort to understand her husband’s perspective, the mom wrote, “I Know my husbands intentions are good and he’s trying to build my son’s independence and have him feel like a little mini adult since kids love that but I draw the line at this.” 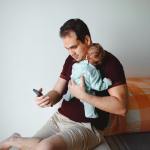 She added that her parents would wait in public restrooms for her until she was 11, “all for safety reasons mostly.” The mom asked, “Is there a cutoff where you stop that?? Is this normal? What do yall think?”

Redditors had big feelings about this. “Here’s the real answer, it depends,” one person wrote. “Family restaurant you always frequent and the restroom is relatively small? You’re probably fine. Walmart or some random gas station out on the highway? My dad probably wouldn’t let me go in alone right now. I’m 40.” They’re probably joking, but I also totally get it. There are some restrooms that are still scary to brave alone as an adult!

Another offered an alternative perspective of being an adult with an unattended child in the restroom. “I’m not disagreeing with this, but if you’re going to take your kid into a public restroom, please watch them,” this person wrote. “I got quite the surprise when a 5-6yo boy climbed into my stall and started talking to me a week ago while I was using the restroom. He wouldn’t leave, mom was nowhere to be found. He was cool as a cucumber and didn’t see anything wrong with it, and I was afraid to stand up and flash him in order to leave the stall. We sat there awkwardly for a good 20 minutes while he talked to me about trains 😅.”

I’m laughing so hard because I totally picture my son doing this, as he has no concept of personal space. You should definitely still be checking in on your kids, people!

Someone else brought up a very valid point: “Why doesn’t your husband take your son to the bathroom when you guys are out to dinner?” they wrote. The commenter continued, “He’s wrong. It’s a safety thing. I will sometimes let my son go into the men’s room if he asks and I hover anxiously outside the door waiting for him. In our state we can’t leave kids unattended until around age 8. It’s not against the law but that’s the general guidance.”

The OP responded to this offering a clarification. “To answer your question , my husband will definitely take our son to the men’s at times. I just ask he waits outside his stall. But he also thinks waiting outside the stalls is overdoing it.” The mom went on: “That’s another thing we don’t agree on . I personally think 5 is way too young still , so wanted to get everyone’s thoughts. Husband said he went alone to the restroom at my son’s age and it helped him feel more independent and in his family it’s completely normal.”

It just seems strange to me that this husband has such a hard stance on this issue. I agree with teaching your kids independence and how to do things on their own, but just throwing them to the wolves and telling them you won’t be going with them to the restroom anymore at 5 years old? It’s just way too over-the-top for me.

“That’s the kind of thing that stops me sending my daughter in alone, not predators but she can rarely reach taps or sometimes they are too stiff, same with flush,” another wrote. “Or she might accidentally lock herself in, or drop something in the toilet.”

Someone else agreed, “I take my son (5) and wait outside the stall. It’s about 5% a safety thing and 95% a ‘otherwise he’ll be in there for an hour because he got distracted by unrolling all the toilet paper, or decided to strike up a friendship with the guy in the next stall over who’s just trying to poop in peace.’” Right? Like, has this dad even met a 5 year old before? This is totally something they would do without supervision!

“Developmentally speaking, 5 is too young,” another wrote. “Most 5 year olds still require help to stay on task, not get distracted or lost in la la land, and struggle to follow 3 step instructions without reminders.” Yes, yes, yes! I deeply relate to this. The same person continued, “If your husband wants him to feel independent, I can give you a list a mile long appropriate for your son’s developmental stage. As other commenters have noted, bathrooms are designed with adults in mind. So most 5 years olds not fit properly on the toilet, and can’t reach the sink or soap.”

Someone else chimed in, “5 year olds still have accidents or need help wiping sometimes, I think you’re right to go in with him. Once he starts feeling self conscious and can advocate for himself then he can use the men’s room.” Exactly! It’s a transition that will come naturally, not something that needs to be forced upon. Is this dad afraid he’ll want to go with his mom into the women’s restroom forever? Please!

Before you go, check out these wild stories about Reddit’s most horrific mother-in-laws.