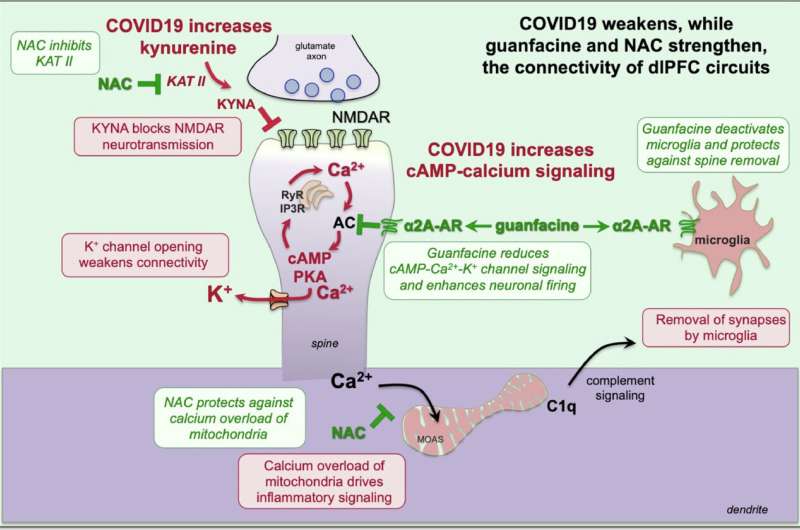 selsun blue normal to oily shampoo and the anti-oxidant NAC, can have therapeutic effects in treating the symptoms of TBI and long-COVID by strengthening PFC neurotransmission and synaptic connections and reducing neuroinflammation. Layer III dlPFC microcircuits depend on NMDAR synapses on dendritic spines to produce the persistent neuronal firing needed for higher cognition. Inflammation drives the production of kynurenic acid, generated from kynurenine by KAT II, which blocks NMDAR and markedly reduces dlPFC neuronal firing. These synapses are also weakened by the opening of nearby potassium (K+) channels by high levels of cAMP-calcium signaling (Arnsten et al., 2021). Stressors increase catecholamine release in the PFC, which stimulates α1-AR and D1R to drive intracellular calcium-cAMP-PKA signaling (Arnsten et al., 2021). This in turn opens K + channels to weaken synaptic efficacy, reduce neuronal firing, and impair working memory and executive functioning. With sustained stress, calcium overloads mitochondria driving a MOAS phenotype, and the initiation of complement C1q signaling, which communicates to microglia to remove spines and dendrites (phagocytosis), leading to loss of PFC gray matter. Guanfacine and NAC can reduce many of these harmful actions: NAC can inhibit KAT II to reduce kynurenic acid production, restoring NMDR neurotransmission, while the α2A-AR agonist, guanfacine, inhibits cAMP-PKA signaling in spines to reduce calcium dysregulation and close K + channels, strengthening network connectivity. These agents can also reduce neuroinflammatory actions: NAC reduces calcium overload of mitochondria, and guanfacine deactivates microglia to reduce phagocytosis. Note that α2A-AR have high affinity for NE and are thus engaged under nonstress conditions with modest levels of NE release, while α1-AR have low affinity for NE and thus are engaged under conditions of stress when there are high levels of NE release (Arnsten et al., 2021). NMDAR=NMDA glutamate receptors; MOAS=mitochondria-on-a-string which are associated with calcium overload; KAT II=kynurenine aminotransferase. Credit: Neuroimmunology Reports (2022). DOI: 10.1016/j.nerep.2022.100154″ width=”800″ height=”525″>

Individuals with long COVID, sometimes referred to as “long-haulers,” experience symptoms that may persist for weeks, months, or even years after their acute viral infection. While symptoms vary widely, a common complaint among patients is “brain fog”—a colloquial term for significant, persistent cognitive deficits, with consistent impairment of executive functioning and working memory.

Long-haulers may experience a lack of mental clarity, poor focus and concentration, memory problems, difficulty with multi-tasking, and more. Brain fog can be debilitating, but there currently are no treatment options that are approved for the condition.

While the number of patients they studied is too small for their results to be definitive, Yale researchers, using their extensive experience with two existing medications, have published initial evidence that those drugs, given together, can mitigate or even eliminate brain fog.

Guanfacine, developed in the lab of Amy Arnsten, Ph.D., Albert E. Kent Professor of Neuroscience and professor of psychology, was approved by the Food and Drug Administration (FDA) for the treatment of ADHD in 2009, but clinicians have also used it extensively off-label for other prefrontal cortical disorders such as traumatic brain injury (TBI) and PTSD.

Now, Arnsten has joined forces with Arman Fesharaki-Zadeh, MD, Ph.D., assistant professor of psychiatry and of neurology, who has been treating long COVID patients with a combination of guanfacine and N-acetylcysteine (NAC), an anti-oxidant also used for the treatment of TBI.

The combined therapy, they found, was successful in relieving brain fog for their small cohort of patients. And while larger, placebo-controlled clinical trials will be needed to establish these drugs as a bona fide treatment for post-COVID-19 neurocognitive deficits, they say patients can obtain them now if their doctors wish to prescribe them.

“There’s a paucity of treatment out there for long COVID brain fog, so when I kept seeing the benefits of this treatment in patients, I felt a sense of urgency to disseminate this information,” says Fesharaki-Zadeh. “You don’t need to wait to be part of a research trial. You can ask your physician—these drugs are affordable and widely available.” Because they are FDA-approved and have been used for years, their safety for patients is established.

The researchers published their case study in Neuroimmunology Reports on November 25.

Focus on a brain area with unique properties

Executive functioning, working memory, and attention regulation are carried out by a recently evolved area in brain called the prefrontal cortex. Neural circuits in this region are “remarkably vulnerable” to inflammation and stress, says Arnsten, who has spent decades studying the circuits behind cognition.

“The circuits that generate higher cognitive function have very special molecular needs because they’re having to create neural activity without any sensory stimulation—abstract thoughts and memories, for example,” she says. “The neurons have to generate and sustain their own activity.” Arnsten says inflammatory factors can interfere with these molecular needs and inhibit the circuits’ ability to function. Hence, brain fog.

Guanfacine, one of the two drugs tested in this trial, is designed to strengthen prefrontal cortex connections and protect against inflammation and stress. While originally developed to treat ADHD, it is being used to treat other conditions associated with prefrontal cortex dysfunction, and studies show that the drug is effective in restoring executive functioning and memory. NAC, the second medication, is a robust antioxidant and anti-inflammatory agent that can also be used to treat this neural region.

Fesharaki-Zadeh is a clinical neuroscientist with special interests in traumatic brain injury and PTSD who has been treating his patients successfully with a combination of guanfacine and NAC for years. After encountering his first long COVID patient in June 2020, he became interested in using this regimen to treat the post-COVID brain fog.

“I had the idea of approaching the treatment from two different perspectives—modifying the pro-inflammatory, pro-oxidation pathway with NAC, and treating the post-COVID neurocognitive sequelae impacting executive functioning with guanfacine,” he says. “We wanted to attack this using a multi-model approach that took advantage of the synergistic relationship between NAC and guanfacine.”

Faced with his first long COVID case, Fesharaki-Zadeh recognized the overlap between the brain fog his patient was facing and symptoms in his post-concussive patients. So he started with NAC, which is commonly used to treat symptoms following concussions, and noticed partial benefits in energy and memory. Encouraged, he tried adding in guanfacine and saw even more improvement.

Since then, Fesharaki-Zadeh has treated 12 patients experiencing post-COVID brain fog with this regimen. He instructed patients to take 1 mg of guanfacine at bedtime, and if well-tolerated, to increase the dosage to 2 mg after one month. Patients also took 600 mg of NAC once a day.

Eight patients reported substantial benefits, including improved memory, organizational skills, and ability to multi-task. For some, the brain fog completely resolved, and they were able to resume their normal activities. Two patients were unavailable for follow up, and the other two discontinued the medication due to side effects including low blood pressure and dry mouth. Since then, the researchers have modified the regimen from an immediate-release form of guanfacine to an extended-release form, which reduces the risk of side effects.

One patient in the cohort was a nurse who had become so debilitated that she had to significantly reduce her hours at work. Although she found relief with the treatment, she had to briefly stop due to dizzy episodes, and her cognitive deficits returned. When she resumed treatment, her brain fog once again lifted. She has not experienced any dizziness since.

“This was not a placebo-controlled trial, but anecdotes like this make one more confident that the relief is really due to the drug and not the placebo effect,” says Arnsten.

“She needed to greatly reduce her working hours at a time when she was needed most,” says Fesharaki-Zadeh. “Treating her condition not only helps her, but also all of us.”

Hope for long COVID patients and beyond

As one patient after another began reporting relief, Fesharaki-Zadeh grew excited. For most of his patients, this was the first time a treatment was successful in alleviating their brain fog.

“I was just struck by these younger folks who are being devastated by this disease that was continuing to persist,” he says. “As a physician, in the beginning, I felt powerless. We feel urgency to get this case report out so that more patients could be treated.”

The researchers hope that their case study will lead to the funding of placebo-controlled clinical trials involving a larger cohort of patients undergoing this treatment. But long-haulers who are debilitated by their symptoms need treatment now. Fortunately, the researchers say, they can ask their physicians for a prescription for guanfacine, and NAC is available over the counter.

“If patients have a physician who can read our paper, we’re hoping that they can access help right now,” says Arnsten.

The researchers also hope that this regimen can be helpful in other groups of patients. long-COVID is not the only post-viral syndrome to cause brain fog—patients with conditions including post-Lyme and myalgic encephalomyelitis/chronic fatigue syndrome (ME/CFS), for example, can also experience debilitating cognitive deficits.

Indeed, Fesharaki-Zadeh has already seen promising results while treating one post-Lyme patient. Furthermore, the treatment may be beneficial in other inflammatory conditions. He has also seen cognitive benefits in one of his multiple sclerosis (MS) patients who was struggling with cognitive and memory deficits.