Following an unprecedented winter weather crisis in Texas in February that left millions of homes and businesses without power, the ASPCA and Wings of Rescue transported over 170 pets to the Northeast, panadol for cold relief dosage providing much needed relief to animal shelters impacted by the storms.

“Animal shelters were impacted by the storms, many losing power and access to water,” says Karen Walsh, the ASPCA’s Senior Director of Animal Relocation. “Many shelters have outdoor kennels and were scrambling to find water, blankets, heaters, hay and even foster caregivers.” 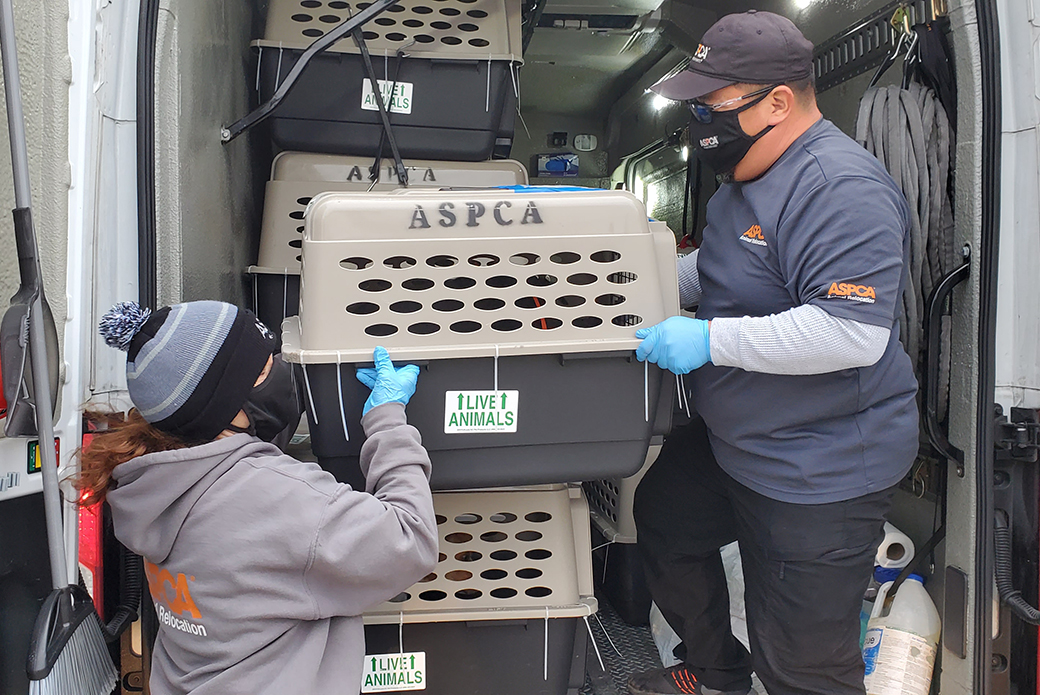 Animals from the Humane Society of North Texas being loaded onto the ASPCA’s relocation vehicle before boarding a Wings of Rescue plane.

The animals were flown on February 20 and 27 to shelters in Delaware, New Jersey and Pennsylvania. Seventy-five animals went to St. Hubert’s Animal Welfare Center in Madison, New Jersey.

“St. Hubert’s has long been a receiving partner for the ASPCA both in relocation efforts and disaster response,” says Colleen Harrington, WayStation Program Director for St. Hubert’s.

“Our community always steps up to support animals in need, no matter where they come from,” adds Tiffany Barrow, Vice President of Operations for St. Hubert’s. “And we saw that people were eager to open their homes and hearts to these animals.”

By mid-March, all 75 cats and dogs were in new homes, including Bella, Ernie, Eddie and Walter, whose adoption stories follow.

Just before the storms whipped through Texas, a young mixed-breed dog was abandoned in the parking lot of the Humane Society of North Texas (HSNT) in Fort Worth. HSNT Staff took in the skittish dog, named Timber, and days later, on February 20, she was on a flight to New Jersey. Three days after that, Timber was the first dog from the transport to be adopted from St. Hubert’s.

Debbie D. of Livingston, New Jersey, and her family had wanted a dog companion for their three-year-old mixed-breed named Cookie, who loves other dogs. Having adopted dogs from St. Hubert’s before, they called and learned about the transport from Texas, making an appointment to meet Timber.

Bella, left, before her transport and in her new home.

“I’m one of those people whom you had at ‘hello,’” Debbie says. “And I had that feeling about Timber when we met her.”

Debbie was accompanied by her husband, Richard; daughter Dana; son Richard; and Cookie. The family spent an hour with Timber.

“She was super sweet and friendly and got along well with our son Richard, who has Down Syndrome and is gentle but childlike,” says Debbie. “We adopted her that day and renamed her Bella because she’s so beautiful.”

Once home, Bella showed signs of food insecurity, eating rapidly to guard it from others.

“She was super skinny, so we hand-fed her for a while to slow her down,” says Debbie. Bella has since gained weight and has proven to be a quick learner. “She can sit, go down and is very food-motivated,” Debbie says. 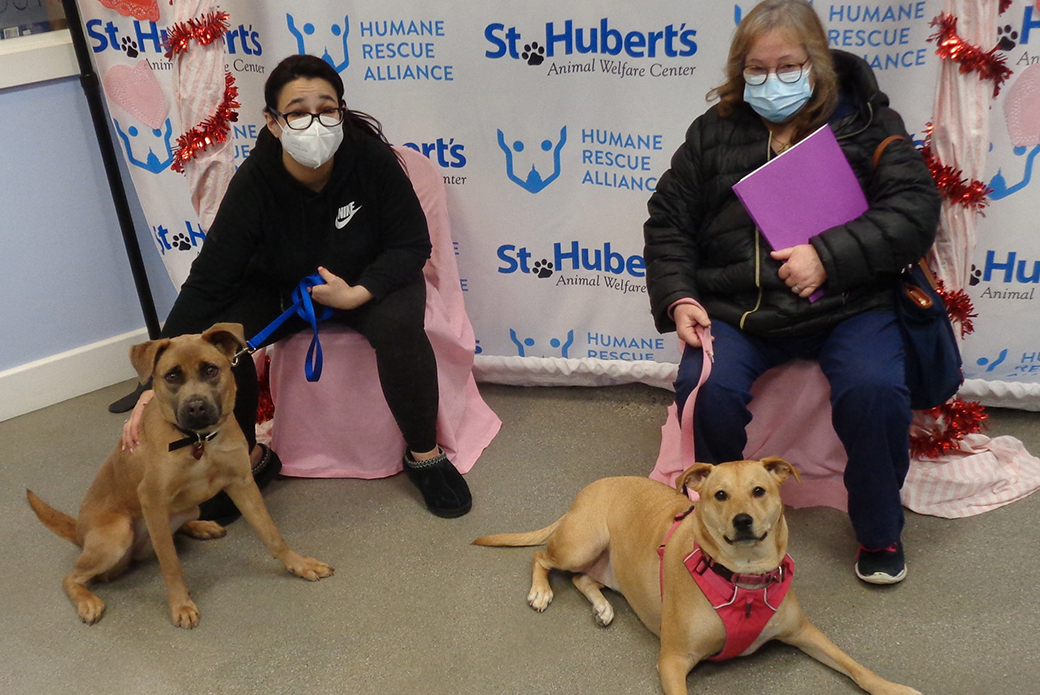 Bella on adoption day with Dana, left and Debbie, right, and the family’s other dog, Cookie.

With the family mostly at home during the pandemic, it was a good time to adopt another dog, says Debbie, a radiology manager at a local hospital.

“Everything aligned timing wise,” says Debbie. “And we really do love having two dogs.”

Tammy T. lost both of her 17-year-old cats during the pandemic. 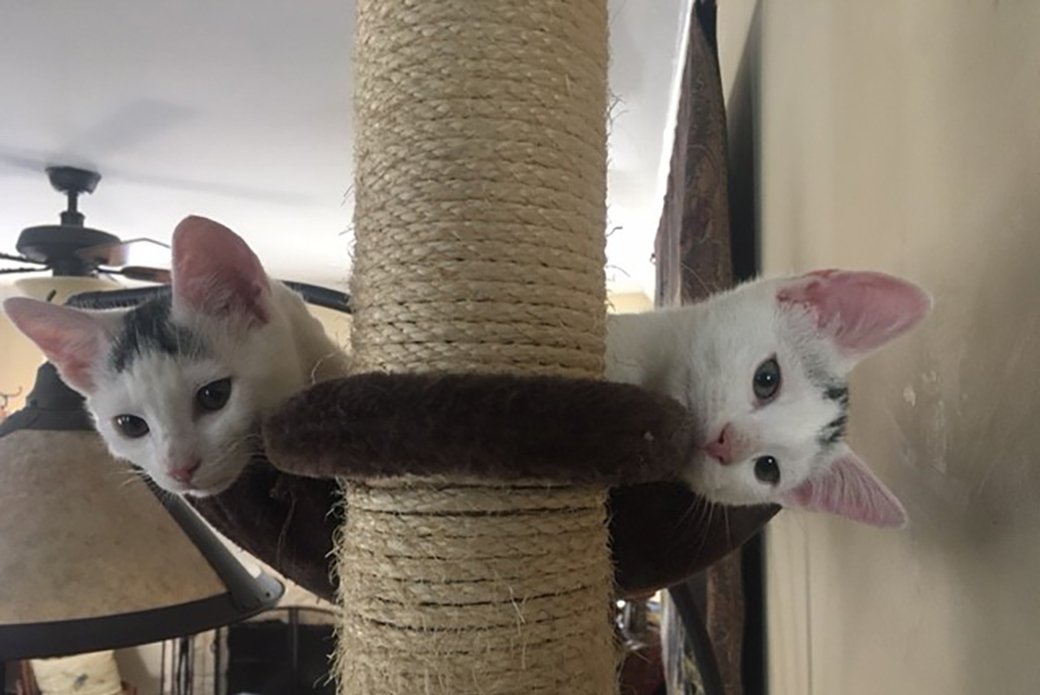 “Even though I have two dogs, it was astounding how empty the house felt without a cat,” says Tammy, who was eager to adopt again and made an appointment to visit St. Hubert’s. “I don’t like a house without pets. It doesn’t feel right.”

She visited St. Hubert’s intending to adopt one kitten, but soon met Phil and Lil, a bonded pair she learned had just been transported from Texas. 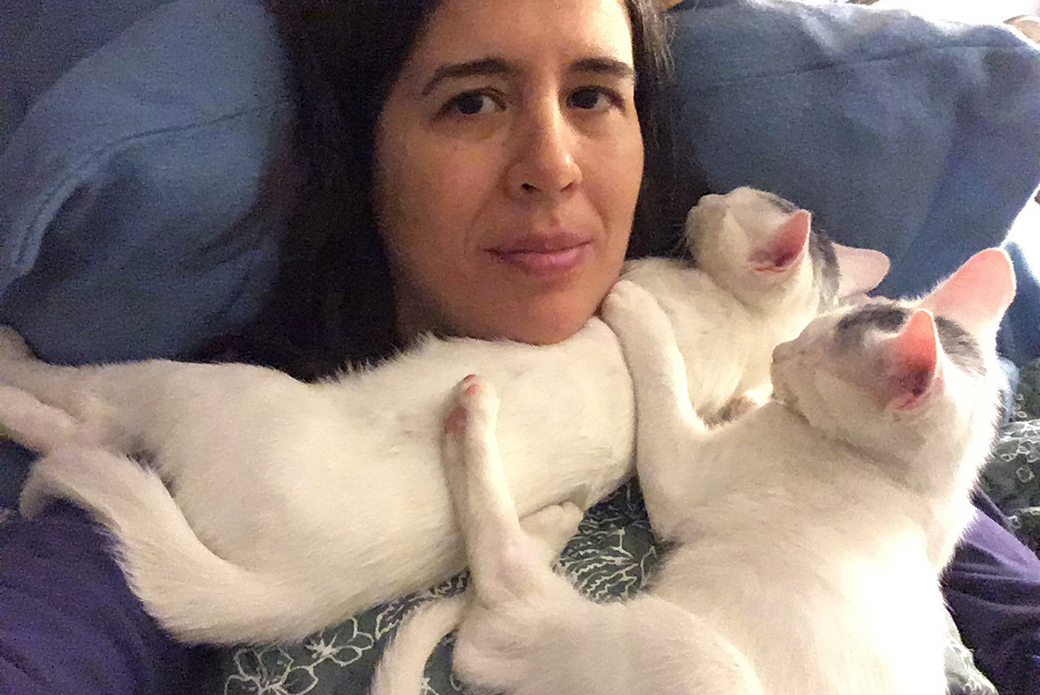 Tammy with her new “matching” kittens.

“They matched perfectly. How could I pick just one?” Tammy says. “The obvious choice was to adopt them both.”

The kittens wasted no time in exploring every inch of Tammy’s home in nearby New Providence. In honor of their exploratory natures, Tammy renamed the cats Ernie and Eddie after the explorers Ernest Shackleton and Edmund Hillary.

“Ernie even has ‘sled track’ stripes on his head and Eddie’s forehead resembles a mountain peak,” Tammy says.

Tammy, who works on the retail operations team for a sporting goods company, now works full-time from home because of the pandemic.

“I thought, ‘If I’m going to be stuck at home, it’s the perfect time to have kittens,’” she says.

Tammy has a close relationship with St. Hubert’s, and recalls taking her childhood dog there for obedience classes.

When they’re not dozing together, Ernie and Eddie enjoy exploring the outdoors from a safe enclosed patio.

“St. Hubert’s has always been in my life,” says Tammy, whose two dogs are Ginger, a 2014 graduate of the ASPCA Behavior Rehabilitation Center’s pilot program, which was located at St. Hubert’s; and Cori, whom she adopted as a helper dog for Ginger.

Eddie and Ernie have each warmed up to Ginger, one of Tammy’s two dogs.

“I’ve always had pets,” Tammy says. “And I’m convinced I hit the jackpot with Ernie and Eddie!”

Manhattan resident Adam H. was watching the evening news on WABC-TV when he saw a segment that featured a black Border Collie mix named Challa.

“That’s it, he’s the guy!” Adam recalls saying. “Something just told me this was the dog we needed to add to our family. The breed and the timing were just right.” 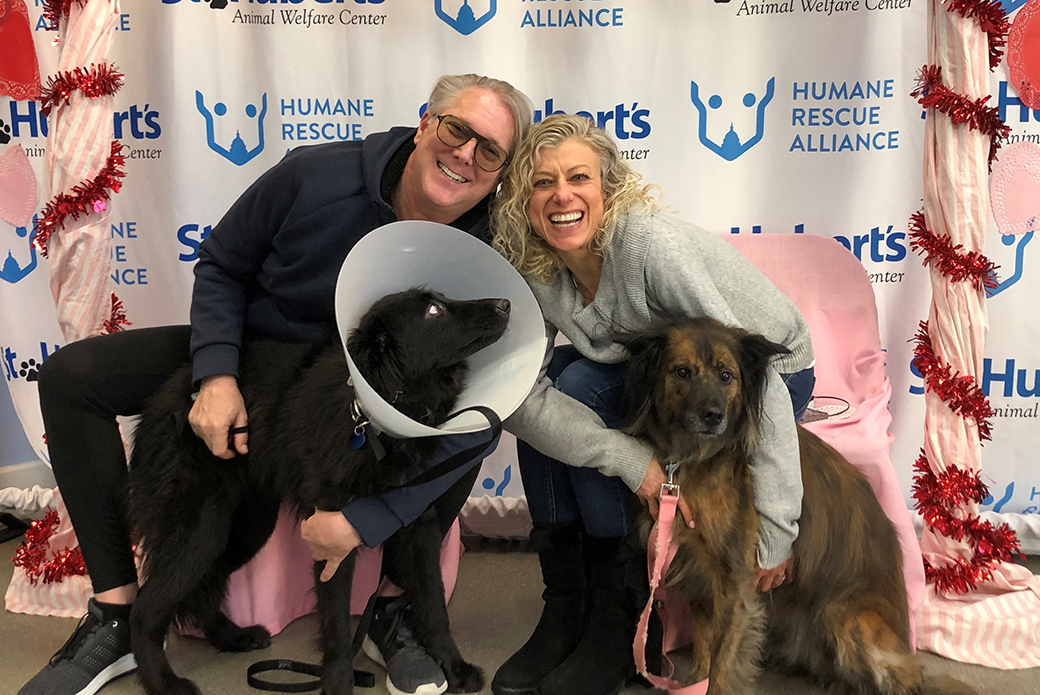 Adam and his fiancée, Rita Joan S., called St. Hubert’s and made an appointment online to meet Challa. They wanted a second dog as a companion to Wilma, their five-year-old rescued shepherd mix from Atlanta, Georgia.

“Wilma’s never been alone,” says Adam, a lighting designer whose travel was suspended during the pandemic. While Rita Joan’s job in finance is on temporary hiatus, the couple anticipated anxieties with Wilma when they returned to full-time work and travel. 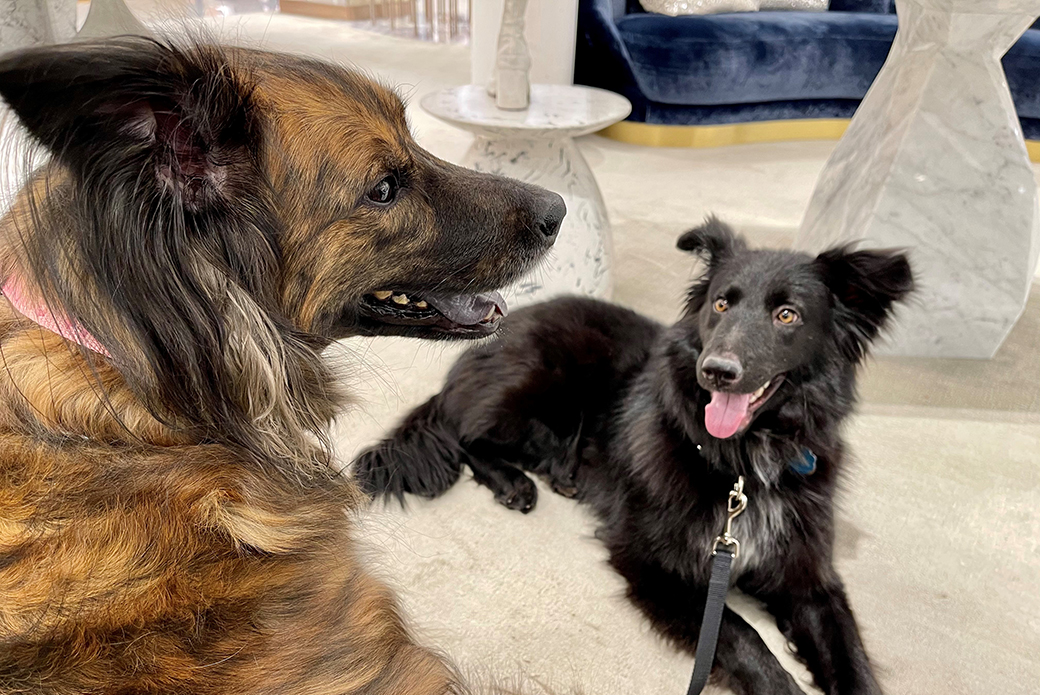 They renamed their newly adopted dog Walter, who became the seventh dog Adam has adopted in his lifetime.

“He’s a really good dog,” says Adam. “We thought Wilma might be territorial, but she brings Walter her toys to share. They really, really enjoy each other and are inseparable.”

Now 10 months old, Walter has gained 15 lb. and is house- and crate-trained. The couple often stroll down New York City’s posh Fifth Avenue where their dogs are welcome visitors in department stores. 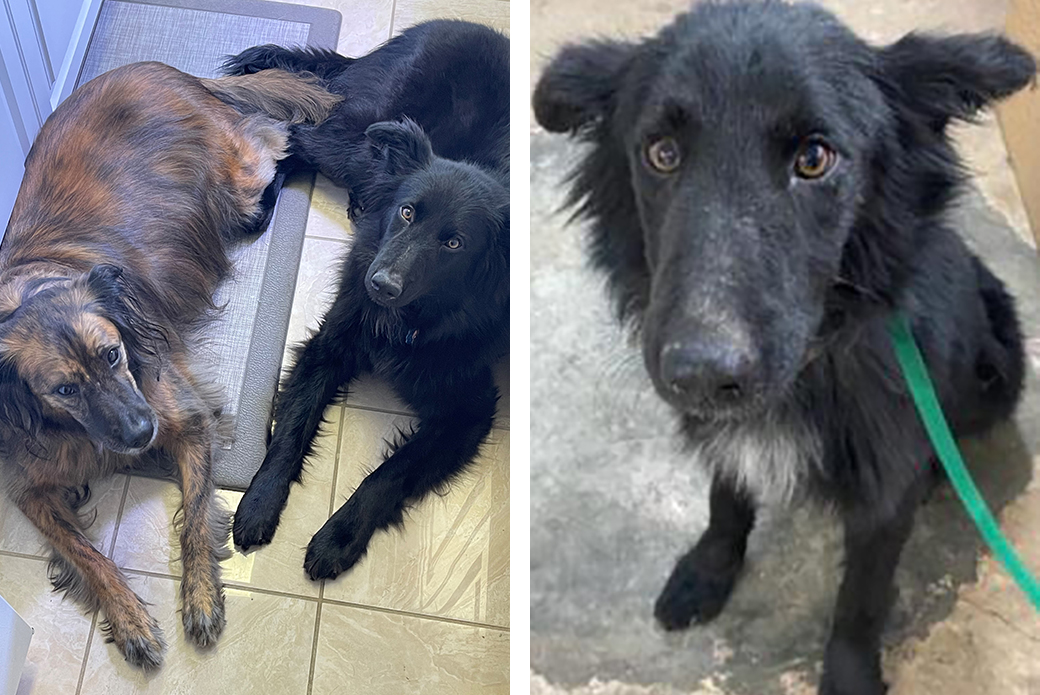 Walter is bonded with his new big sister Wilma.

“Walter is a dream puppy,” Rita Joan says. “All he really wants is to be part of our family. He bonded with his big sister and is completely enamored with her. Wilma’s our Southern belle and Walter’s a true gentleman.”

“We couldn’t be happier!” says Adam.