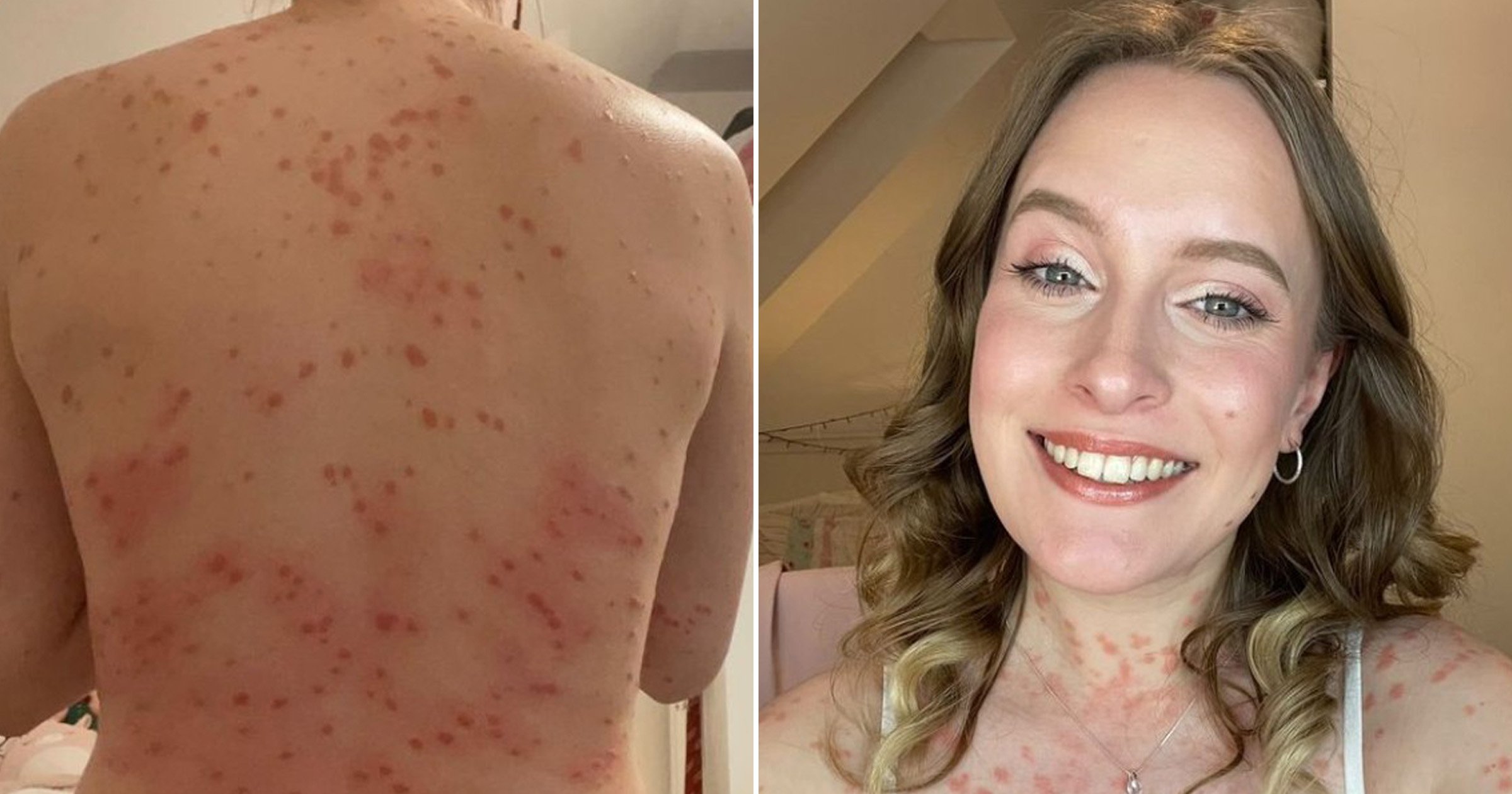 A nursery worker misdiagnosed with chicken pox actually has extreme psoriasis – so extreme it causes her to bleed through her clothes repeatedly during the day.

However, due to the NHS backlog, she has not been examined by a skin specialist despite months of suffering.

Psoriasis is a skin disease that causes red, itchy and scaly patches to form on the skin, caused by the increased production of skin cells.

Skin cells are normally replaced every three to four weeks, however, in psoriasis this is sped up, with skin replacing every three to seven days. It’s not contagious and its cause is not fully understood.

Grace began to notice something was wrong after developing tonsillitis.

Once recovered, Grace returned to work at a time where chicken pox was being passed around children in the nursery.

Grace began to break out in spots and believed she had caught pox for the second time in her life, but something wasn’t quite right.

Despite an initial improvement, her tonsilitis came back, causing problems with her breathing.

Soon her breathing improved, but the spots, still believed to be chicken pox, began to grow bigger and more blotchy, filling with pus.

Grace visited a doctor and they prescribed her tablets for chicken pox, but the doctor noted they had never seen a case like it.

The medication didn’t help and the itching became worse.

In May, she was referred to a dermatologist, and told it could be psoriasis.

Grace has still not been seen by a specialist for the disease, and suffers severe discomfort from the itching and dry skin of psoriasis.

Now, she has to be extremely careful as the spots can bleed out and alarm those around her.

She lives with intense pain and dead skin falling off daily.

Despite initial anxiety around being seen with the condition, Grace now wears shorts to help normalise the appearance of psoriasis and to combat the stigma around skin disorders.

‘April started off as the worst month of my life,’ said Grace.

‘I had no idea what was going on, and it was scary.

‘It’s now the last week of July and I have not been to the hospital once, nor have I been seen again, and I feel like I’m trying to work my disease out all by myself.’

Grace describes the problems her psoriasis has caused in everyday life, damaging her body confidence.

‘I feel like I’m all alone sometimes, because I’ve got no one to guide me in what I’m going through,’ said Grace.

‘Finding creams that suit me, changing my routine, having to be more careful of things around me because if I cut one of my psoriasis spots very slightly then I bleed a lot, so I now carry around plasters with me.

‘I’ve also had a hard time with my dead skin. If I only moisturise once a day, then my dry skin will be horrific, and it becomes painful.

‘I went to Disneyland Paris and that was terrifying, because I had hundreds of people staring at, talking and pointing at me.

‘As someone who only knows a few basic words of French, I couldn’t understand what they were saying, nor could I go and talk to them about it.

‘I was never body conscious, but since developing this disease and having nearly 40-degree heat this summer, what I wear has become such a big obstacle to face.’

Thankfully, Grace has a strong support network from friends and family.

She said: ‘The children at the nursery would be curious about it, and ask me what it was, and I would tell them it was fairy kisses or if they were a bit older, I’d try and explain it to them.

‘I haven’t had this disease for long, and I know there are people who have it worse. But if I can make a difference to another person’s life or make them feel like they go out with this disease then I will feel happy.

‘To my fellow psoriasis sufferers, you are beautiful and don’t let anything let you think otherwise.’