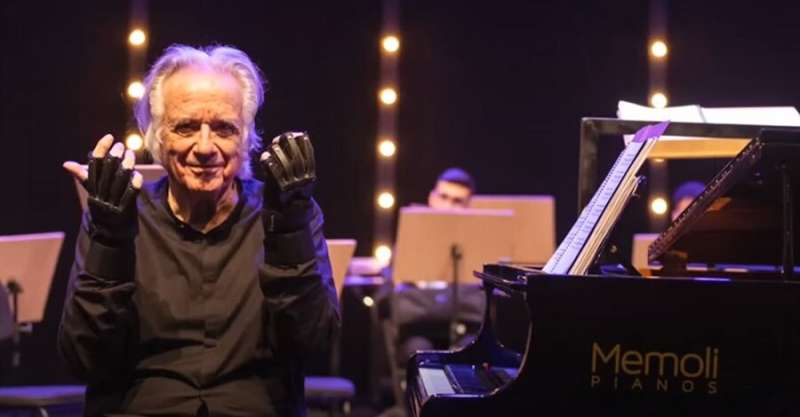 KAIST’s neuroscientist and professor, Dr. Daesoo Kim attended the “Conference for Musicians with Dystonia” supported by the World Health Organization (WHO) and the Carnegie Hall concert of legendary pianist João Carlos Martins, who is also a dystonia patient, q es azathioprine to announce his team’s recent advancements toward finding a cure for dystonia.

On November 19, 2022, a “miracle concert” was held in Carnegie Hall. João Carlos Martins was a renowned world-class pianist in the 70s and 80s, but he had to put an end to his musical career due to focal dystonia in his fingers. But in 2020, he began using a bionic glove developed by industrial designer Ubiratã Bizarro Costa and after years of hard work he was back in Carnegie Hall as an 82-year-old man.

During the concert, he conducted the NOVUS NY orchestra in a performance of Bach, and later even played the piano himself. In particular, between his performances, he gave shout-outs to scientists studying dystonia including KAIST Professor Daesoo Kim, asking them to continue working towards curing rare diseases for musicians.

Musician’s dystonia affects 1–3% of musicians around the world and musicians make up approximately 5% of the total number of dystonia patients. Musicians who are no longer able to practice music due to the disease often experience stress and depression, which may even lead to suicide in extreme cases. Musicians are known to be particularly prone to such diseases due to excessive practice regimens, perfectionism, and even genetics.

Currently, botulinum toxin (Botox) is used to suppress abnormal muscles, but muscle function suppression ultimately means that the musician is no longer able to play the instrument. João Carlos Martins himself underwent several Botox procedures and three brain surgeries, but saw no therapeutic results. This is why a new treatment was necessary.

Professor Daesoo Kim’s research team at KAIST took note of the fact that abnormal muscle tension is caused by excessive stress, and developed NT-1, a treatment that blocks the development of the symptoms of dystonia from the brain, allowing patients to use their muscles as they normally would. The research team published their findings in Science Advances in 2021, and João Carlos Martins invited Professor Daesoo Kim to the UN conference and his concert after reading this paper.

During the UN conference held the day prior to the Carnegie Hall concert, Dr. Dévora Kestel, Director of the Mental Health and Substance Use at WHO, said, “Although dystonia is not as well-known, it is a common disease around the world, and needs our society’s attention and the devotion of many researchers.” Professor Daesoo Kim said, “NT-1 is a drug that blocks the cause of dystonia in the brain, and will allow musicians to continue practicing music. We aim to attain clinical approval in Korea by 2024.”

NT-1 is currently under development by NeuroTobe, a faculty-led start-up company at KAIST, headed by Professor Daesoo Kim as the CEO. The synthesis of the drug for clinical testing has been successfully completed, and it has shown excellent efficacy and safety through various rounds of animal testing. Unlike Botox, which takes a few days to show its therapeutic effects after receiving the procedure from a hospital, NT-1 shows its therapeutic effects within an hour after taking it. As a so-called “edible Botox,” it is expected to help treat various muscular diseases and ailments.