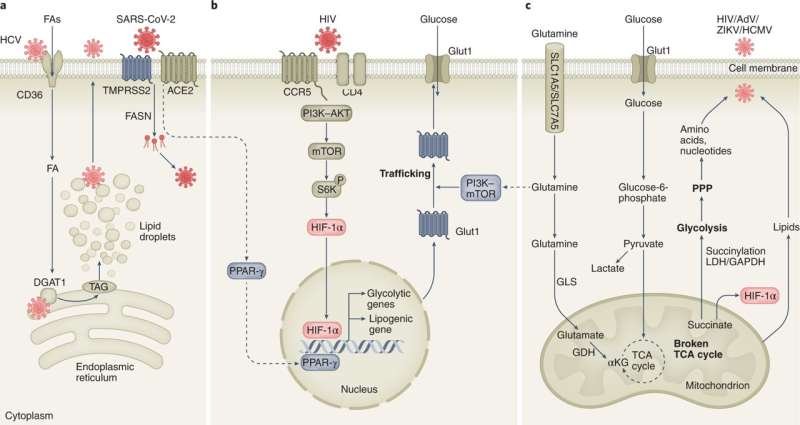 The immune system has long been touted as the body’s primary defense against invading viruses, with the understanding that a strong immune response swiftly knocks out an infection while a weak one allows it to linger, leading to prolonged disease or even death.

Now, researchers at Tulane University are looking at an entirely different system—the body’s ability to use nutrients at a cellular level—to predict disease response and severity.

Tulane immunologist Clovis Palmer, Ph.D., studies metabolic changes resulting from viral infections. In a literature review published in Nature Metabolism, Palmer analyzed a body of evidence that looked at the metabolic changes that occur in cells when viral invaders, such as HIV, hepatitis B, or SARS-CoV-2, pose a threat.

Palmer concluded that that the way in which cells, even non-immune cells, use nutrients in the presence of a viral pathogen can determine disease outcome and severity in the earliest stages of infection, or even long after the pathogen leaves the body.

Certain molecules on the surface of a cell determine how nutrients are used. These allow nutrients like glucose and fat to facilitate energy production or, if necessary, mount an offense against invading pathogens. Under these conditions, nutrients strengthen and bolster the cell. But viral pathogens can also hijack these surface molecules to gain entry into the cell and then use the nutrients to replicate.

“Whether nutrients are used to strengthen and defend the cell or are hijacked by the virus depends on conditions in the host like older age, nutritional status and obesity,” Palmer said. “We saw that these were all significant risk factors for the worst outcomes of COVID but didn’t really know what was driving it.”

Understanding how cells use nutrients in the presence of viral pathogens at the earliest states of infection is key to the development of treatments that can strengthen the cell, not the virus. While most antiviral medications take aim at the virus, Palmer seeks to prevent or lessen disease by keeping the nutrients on the cell’s side.

Palmer is working with Jay Rappaport, Ph.D., director of the Tulane National Primate Research Center and professor of microbiology and immunology at the Tulane University School of Medicine, on rewiring metabolic response in nonhuman primate models of COVID and HIV to prevent and treat long-term symptoms.

“We know that when metabolism is impaired, there is increased susceptibility to infection,” said Rappaport. “Modulating the metabolic response has vast implications for all infectious diseases, from optimizing immunity to mitigating the effects of aging, autoimmunity, and other drivers of disease.”