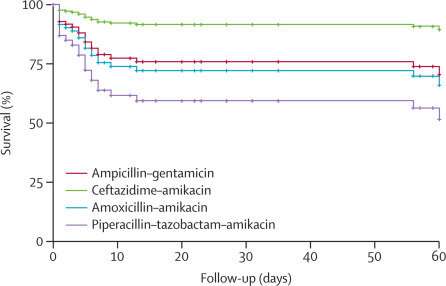 Information about the most effective antibiotics to use in low and middle-income countries (LMICs) for neonatal sepsis has been discovered uniquely combining epidemiological, genomic and pharmacodynamic data. The research could be applied to potentially save many lives globally by increasing the effective treatment—currently neonatal sepsis causes an estimated 2.5 million infant deaths annually. This research also highlights economic issues, specifically regarding treatment costs and other barriers to treatment.

The research published today in The Lancet Infectious Diseases, combined microbiology, genomic, epidemiological, pharmacodynamic and economic data for the first time to study the efficacy of various antibiotic treatments for neonatal sepsis in seven low and middle-income countries (LMICs) across Africa and South Asia. This research was done by an international network led by the microbiologists at the Division of Infection and Immunity, Cardiff, in collaboration with researchers at the University of Oxford, the paper proposes alternative antibiotics for septic neonates which could drastically decrease new-born mortality.

This research, funded by the Bill and Melinda Gates Foundation, studied over 36,000 infants over seven countries, making it the largest study of its kind. Data was procured by Burden of Antibiotic Resistance in Neonates from Developing Societies (BARNARDS), a project run by Professor Tim Walsh, which collected data across seven countries between April 2015 and March 2018. Prof. Walsh joined the University of Oxford in 2021 to help established the Ineos Oxford Institute of Antimicrobial Research. BARNARDS collected data from Nigeria, Pakistan, Bangladesh, Rwanda, South Africa, Ethiopia, and India, allowing researchers to have a vast amount of data to analyze.

Neonatal sepsis causes an estimated 2.5 million infant deaths annually, with LMICs in sub-Saharan Africa and Asia having the highest mortality rates. These countries often have reduced access to resources such as laboratory facilities to assess what sepsis-causing pathogens are present, and to discover more about associated antimicrobial resistance.

The World Health Organisation recommends the use of ampicillin and gentamicin for the empirical treatment of neonatal sepsis. Whilst these may be effective in higher income countries (HICs), there has long been speculation that they were less effective in LMICs due to different levels of antibiotic resistance and variation in common pathogens.

Researchers discovered that some sites are already using different antibiotics to those endorsed by the WHO, due to high resistance against these antibiotics. Those prescribed the recommended combination of ampicillin and gentamicin had a survival rate of 75% over 60 days. Conversely, where those prescribed ceftazidime and amikacin had a survival rate of over 90% over the same time period.

These findings will lead to additional follow-up studies; not least, intervention studies related to treatment and ensure that sepsis is treated with appropriate antibiotics and infection prevention and control practices.

Lead author Kathryn Thomson says, “Extremely high resistance (>97%) was found against ampicillin in Gram-negative sepsis causing isolates analyzed from BARNARDS sites. Furthermore, only 28.5% of Gram-negative isolates were susceptible to at least one of the combined antibiotic therapy of ampicillin and gentamicin. While this may be a suitable empirical treatment for neonatal sepsis in high income countries, this data showcases that it is not an effective option for LMICs, who have different common pathogens and vastly increased resistance against these antibiotics. Many LMIC sites depend on recommended therapies, due to a lack of microbiology facilities to detect common species or resistance profiles. Therefore, further work is urgently needed to improve the sparsity of data in LMICs regarding prevalence and AMR in neonatal sepsis, a major contributor to neonatal mortality and to determine more effective alternative empirical treatments, taking affordability into account.”

The other factor investigated in this study is economic impact on antibiotic use. The study examined the average earnings of people in LMICs. This was used to contextualize the impact of antibiotic costs on the average person, by comparing average wages with the vast discrepancies in costs of certain antibiotics in different countries. For example, piperacillin-tazobactam costs $2.60 per day in India, which is a massive 76% of the average daily wage. By contrast, it costs $20 a day in Nigeria, representing between 219% and 741% of the average daily wage depending on the area of the country.

The economic data raises questions about who should be responsible for costs of antibiotic treatment, given that more effective alternative antibiotic treatments are often inaccessible in LMICs due to lack of universal healthcare. When asked, six of the seven countries studied stated that the cost of antibiotics influenced which are prescribed. This is shown by the continued wide use of ampicillin and gentamicin, as they are consistently the most affordable antibiotics, despite being considered less effective than other antibiotic regimes for some time now.

Professor Tim Walsh says, “Whilst this study uniquely combined sets of data to help address critical issues around the treatment of neonatal sepsis in LMICs, this study also highlighted gaps and the need for further critical data; not least, how the accessibility and cost of antibiotics impacts on therapeutic treatments and outcomes. The newly established IOI is committed to undertake such studies and establish new and dynamic international networks to provide the rigor of data that will hopefully further our understanding and address one of the most pressing issues in a critical patient population across LMICs.”