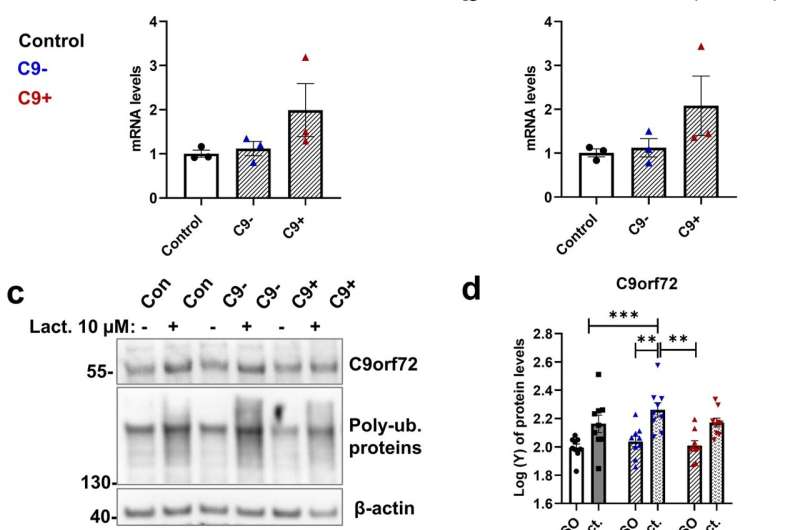 A new study from the University of Eastern Finland suggests that skin fibroblasts from frontotemporal dementia patients may be useful in investigating underlying disease mechanisms as well as in biomarker and drug research.

Frontotemporal dementia (FTD) is the second most common cause of dementia in the working age population. The most common genetic cause of FTD is the C9orf72 hexanucleotide repeat expansion. This expansion is exceptionally common in Finnish FTD patients. Currently, there are no efficient therapies for FTD, it is challenging to diagnose, and the disease mechanisms remain largely unclear.

The new study explored whether skin cells from FTD patients, obtained through skin biopsy performed at Kuopio University Hospital, show specific cell pathological hallmarks or functional alterations compared to healthy individuals, which could promote better understanding of molecular mechanisms of FTD and be useful in the discovery of novel biomarkers or in testing drug effects. Both C9orf72 repeat expansion carriers and patients with sporadic FTD, for whom the underlying cause of disease is unknown, were included in the study.

Cell pathological changes related to the C9orf72 repeat expansion have not been widely described in other cells than neurons so far. In the present study, skin fibroblasts of FTD patients carrying the C9orf72 expansion were found to contain pathological RNA foci in the nuclei, which were derived from the expanded repeat sequence. These findings indicate that skin fibroblasts of carriers of the C9orf72 expansion partially show similar pathological changes to those found in the brain. Thus, patient skin cell cultures may possess potential, for example, as platforms for testing drug effects when screening compounds that could prevent formation of the abnormal RNA foci and the subsequent pathological dipeptide repeat (DPR) proteins derived from these abnormal RNAs.

The brains of FTD patients typically also show other pathological protein inclusions. The present study showed that in the skin fibroblasts of both sporadic and C9orf72 expansion-carrying FTD patients, there were substantially more and larger p62 protein-containing vesicles than in the healthy control fibroblasts. Accumulation of p62 could be a sign of defective ability of the cells to degrade proteins, but defects in the function of the main cellular protein degradation routes, the proteasomes or autophagosomes, were not detected in this study. On the other hand, the present findings raise the question whether the increased number and size of p62 vesicles in skin fibroblasts could be utilized as disease biomarkers in the diagnostics of FTD.

The current study also revealed that skin fibroblasts from both sporadic and C9orf72 expansion-carrying FTD patients displayed a significantly weaker energy metabolism. These changes were detected in assays where the basal respiration and ATP-mediated energy production by the cells’ power plants, the mitochondria, were measured. Because the defective energy metabolism and the changes in p62 vesicles were detected in both sporadic and C9orf72 expansion-carrying patients, these pathological alterations may represent common pathological changes in FTD patients regardless of their genetic background.

“Because brain cells can rarely be obtained from the brains of living patients, other patient-derived cells, such as skin fibroblasts, are extremely useful in research. Their use enables clarifying disease mechanisms at the cellular and molecular level, and may prove useful in biomarker or drug research, even at the individual level. In addition, patient-derived skin cells may be utilized as sources to produce induced pluripotent stem cells (iPSCs), which in turn can be further differentiated in the laboratory to different types of brain cells and used as human disease models in research,” explains Research Director Annakaisa Haapasalo, in whose laboratory at the A.I. Virtanen Institute for Molecular Sciences at the University of Eastern Finland the study was conducted.

In the Haapasalo Lab, FTD patient-derived skin cells have also been utilized to generate iPSCs and further differentiated to different types of brain cells, such as neurons and microglia. Examination of these cells is currently ongoing.