He might be one of the fastest guys in the water, pulling in podium finishes for the 50- and 100-meter freestyle in the 2019 World Para Swimming World Series. But most recreational swimmers probably spend more time swimming laps than Jamal Hill does. The six-foot-four, 185-pound Hill, 26, has a typical hard-driving-athlete regimen: five training days a week, about five hours a day. But only about 40 minutes of that is actually in the pool.

The expected has never really been Hill’s gig. By the time he was ten, he’d started having shoulder problems. On Thanksgiving that year, the right side of his body went limp. Within hours, he was hospitalized, for a time able to move only his head and speak. He was diagnosed with Charcot-Marie-Tooth disease (CMT), ce este lidocaine a progressive, inherited condition causing nerve damage. Rather than give up, Hill kept swimming, competing in high school and college.

Angling for a pro career, he began training with USC’s Trojan Elite team, pretending nothing had changed. “Not only did I not want others to know there was anything wrong with me,” he says, “I didn’t want to believe it myself.” This despite the fact that his nerve damage means “from my knees to my toes pretty much feels like I’m walking on prosthetics. I’ve never been able to do things like jump or dunk a basketball, because I don’t really have the function down there. From my elbows to my fingertips, I have about 30 percent nerve capacity there, so it just looks like I’m clumsy.”

When swim coach and mobility consultant Wilma Wong saw him swim, she didn’t see clumsy. The way he got out of the pool reminded her of how some of her clients with conditions like cerebral palsy did—and she asked him if he wanted to tell her something about his body that would help her coach him. The moment Hill acknowledged his CMT to himself—shortly after he began training with Wong in 2018—everything changed. He started working with his disease, discovering new ways to add power to make up for muscle/nerve connections that couldn’t deliver it. “For a long time, my diagnosis was a point of shame for me. I felt cursed,” he says, adding that as soon as he stopped treating his disease as a negative, “blessings and opportunities started to appear.”

Hill wants to share his success with others and has created Swim Up Hill, a foundation dedicated to teaching millions of people—especially in marginalized and underserved communities—how to be comfortable in the water in just five hours. During the pandemic, he pivoted to online training, having people use a bowl, a bench, and a bucket to get the basics and get over their fears. He also used the pandemic to keep training hard, on land and in water, and has qualified for Team USA in Tokyo. “Even with a limit, we can be limitless,” he says. 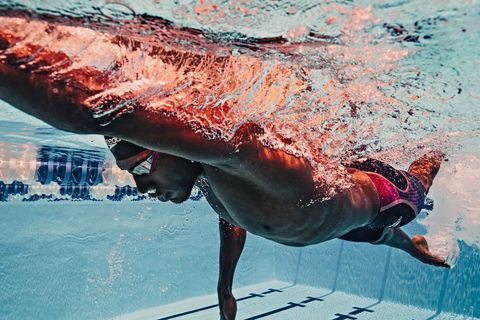 Here’s how he stays fast and strong on land and in the pool:

Hill spends every pool session doing ultra-short race-pace training. For instance, 1,000 yards in 50-meter intervals. For most swimmers, that’s unfathomably low volume. “They’re like, ‘Dude, how are you getting faster?’ ” he says. It’s all about quality: Hill swims each 50 hard, rests until his heart rate drops, then does another rep. “Repetition is the mother of mastery,” he says.

Power up on land

In his two to two and a half hours of daily strength training, Hill trains for explosive power using resistance bands to do chest presses, deadlifts, and bent-over rows. Since a strong back is essential for swimming (and good posture is essential for good lifting, he says), “I make sure to always engage my scaps—you know, the muscles around your shoulder blades.” 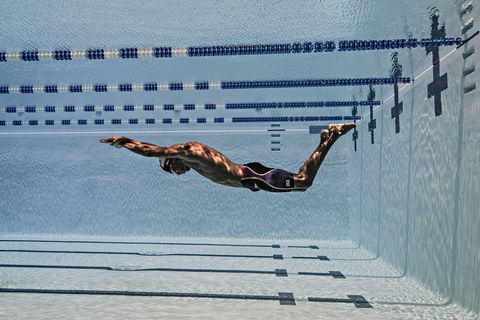 Hill didn’t get faster until he worked with his CMT instead of pretending it didn’t exist. Because he can’t generate power from his legs, for instance, he found another way to get a good start off the blocks. “My torso is twisted and one arm is up; it’s cocked at my hip like the hammer of a pistol,” he says. “I pop that bad boy down, and the momentum from that arm coming down and from the rotation creates the illusion that I actually have a dive where my legs are working.”

This story originally appeared in the July/August 2021 issue of Men’s Health.