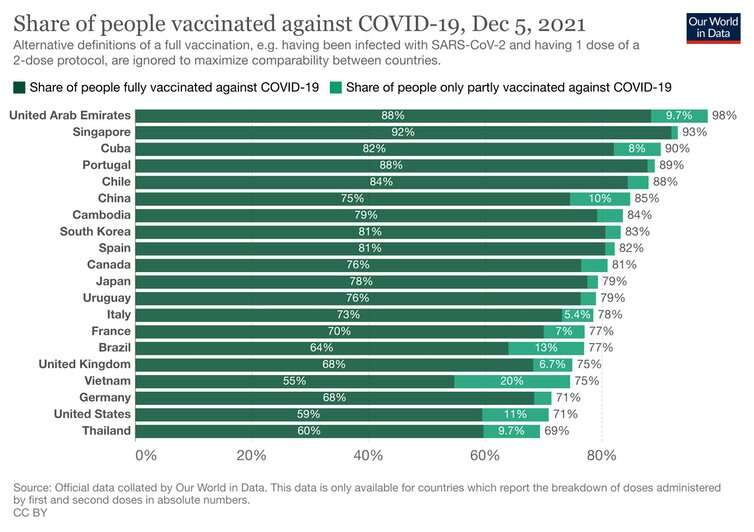 A year ago, Margaret Keenan made history. On December 8 2020, addictive medicine la county she became the first person in the world to receive the Pfizer/BioNTech vaccine outside of a clinical trial. Ninety-year-old Keenan described it as the “best early birthday present”. It was a moment of shining hope in what had been a dark year of deaths, lockdowns and disrupted lives.

Before the vaccines, death rates from COVID were very high, especially in older adults, with rates between 5% and 15% in people over the age of 75 years. Other than pursuing a zero-COVID elimination strategy—an exceedingly difficult task in a globalized world with such an infectious virus—the only other option was to control and delay the spread of the coronavirus until vaccines arrived.

There was no guarantee in the early days of the pandemic that an effective vaccine could be developed in time to make a difference. However, we have seen not just one but several vaccines developed. Better yet, most of these vaccines are highly effective at protecting against severe disease and death from COVID.

The UK was among the first countries in the world to start vaccinating its population, and a herculean effort was mounted to immunize the elderly and vulnerable adults, as well as health and care workers. From a standing start, the NHS rapidly ramped up vaccine deployment, aided to a large extent by the efforts of thousands of GPs, community health professionals and volunteers.

In the early months, the UK out-vaccinated most of the rest of the world. The pace of the rollout was phenomenal. The highest number of new vaccinations reported in one day in the UK was 844,285 (March 20 2021)—the equivalent of vaccinating the entire population of Liverpool.

However, rates of immunization have slowed, and other nations, such as Spain, Japan and Canada, have overtaken the UK. One year on, though, it is still an amazing achievement. Almost 90% of people aged 12 and over in the UK has had at least one dose.

In the first ten months of the vaccination program, it is estimated the UK immunization program saved 127,500 lives and averted more than 24 million infections.

But the journey has not been smooth.

Not long after the first jab was administered at University Hospital in Coventry, controversies and issues began to emerge. One of the earliest was concerns about the vaccine dosing interval.

The interval between the first and second dose of the Pfizer vaccine was meant to be three to four weeks. But faced with a rapidly spreading third wave of infections driven by the new alpha variant, the UK government decided to delay second-dose jabs to 12 weeks to maximize vaccine coverage and to “protect the greatest number of at-risk people overall in the shortest possible time”. The decision created a furore as it went against the vaccine manufacturers’ advised schedules.

There were concerns that vulnerable people who had only received a single dose would be less protected and that immune protection would not last as long. Fortunately, it was the right call and those fears have not transpired. Indeed, studies suggest the longer interval improved the vaccines’ effectiveness.

There were also safety concerns about the vaccine, and two examples stand out.

First, in February 2021, it emerged that there was the risk of a rare blood-clotting disorder called cerebral venous sinus thrombosis (CVST) following vaccination with the Oxford/AstraZeneca vaccine. This led to many countries restricting the use of the vaccine to older adults where the risk was lower. In the UK, people under the age of 30 were offered an alternative to the AstraZeneca vaccine.

CVST, however, remains a rare event. Despite 25 million first doses of the vaccine being administered, to date, only 154 cases have been reported to the UK’s Medicines and Healthcare Regulatory Authority.

Nonetheless, safety concerns and uncertainties of the risks and benefits of immunizing children have led the UK to adopt a much more cautious approach to rolling out vaccines to the entire population, particularly to younger age groups where cases of severe COVID are rare. Some have argued that caution is needed because, in the long run, the loss of public trust in national vaccination programs could take a long time to regain.

However, the caution of rolling out vaccination to school-aged children meant an opportunity was missed to immunize children over the summer. Belatedly, the UK’s chief medical officers advised the government to vaccinate children aged 12–15 years in September. This meant most children were susceptible to infection at the start of the school year. For many, the vaccines would come too late.

In the absence of adequate mitigation measures, such as more mask-wearing, isolation of contacts and better ventilation in schools, infections spread rapidly in schools in England over the next few months. By mid-November, rates of infection were highest in young children and secondary school children.

Vaccination uptake rates in the under 18s still lag behind the adult population quite considerably, with less than half of 12- to 15-year-olds having received their first dose so far.

Despite the enthusiastic roll out of vaccines by the NHS in early 2021, disparities in the coverage and uptake of vaccines emerged. This particularly affected minority ethnic groups, people living in deprived areas and those with severe mental illness or learning disabilities.

Issues with the accessibility and acceptability of vaccines for these groups are possible explanations. In the pursuit of achieving high population vaccine coverage, this may come at the cost of bypassing underserved groups and risks further entrenching health inequalities.

Vaccine hesitancy is also more likely in these groups. There are several reasons for vaccine hesitancy, including vaccine safety concerns and misperceptions about the risk of getting COVID and of becoming seriously ill. To this end, the NHS, local authorities and community-based organizations have made considerable effort to contact and promote vaccine uptake in many of these groups where uptake is low. But it remains a persistent issue.

Social media, as well as some mainstream media, have also had a negative influence on vaccine uptake through misinformation, disinformation or the spread of conspiracy theories. At the extreme end, an anti-vaccination movement has emerged, some with links to anti-lockdown and COVID-denialists views. Some of their activities have become increasingly aggressive, including targeting schools, children, parents and health professionals.

Separately, to protect vulnerable patients and care home residents, the government has made it mandatory for health and social care workers to be vaccinated in England. This has been a controversial decision, not least from an ethical and civil liberties perspective. Apart from concerns about the loss of personal choice in the matter, there are also concerns that such an approach may backfire, undermining trust in the establishment, potentially increasing marginalization and vaccine skepticism.

A person’s vaccination status has not just been used as a requirement for certain occupations, it has also been used as a qualifier for international travel and entry to sporting events, music festivals and theaters. The so-called vaccine passport is not a new idea, having parallels with the International Certificate of Vaccination or Prophylaxis, created by the World Health Organization for diseases such as cholera, yellow fever, plague and typhoid.

Vaccine passports have enabled many of these events to take place and have made international tourism possible once again. While many countries have taken up the idea of vaccine passports, there is no universal vaccine passport accepted by all of them, and debates continue as to which vaccines qualify and the number of jabs needed.

There have also been questions about whether they actually work, fears about the loss of privacy and concerns that they discriminate against those who can’t or won’t be vaccinated. In particular, low- and middle-income countries are disadvantaged as they have lower vaccine coverage.

Indeed, the global disparities in access to vaccines is stark. Over 54% of the world’s population has been vaccinated, but only 6% of the population in poor countries. Achieving high levels of vaccine coverage in rich countries would allow a degree of normality to return to them—but it would be a fragile normality.

While infections spread uncontrolled elsewhere in the world, there is a possibility that new variants of the virus will emerge, some of which might carry genetic mutations that allow it to evade vaccine immunity. These variants could easily be imported back into rich countries. This risk appears to be materializing in the form of the latest variant of concern, omicron, that emerged in late November. Initially reported in southern Africa, it has now been detected in many countries around the world.

If the aim is to achieve more enduring security, infections have to be tackled elsewhere, and this requires fairer distribution of vaccines. This echoes UN secretary-general Antonio Guterres’ message back in May 2020 that, “None of us is safe until we all are.”

The other worrying trend that has emerged since Keenan had that first COVID jab back in December 2020, is waning vaccine protection, especially in older adults. Thankfully, vaccine protection against severe disease and death appears to remain high. That said, a small drop in vaccine protection could still lead to many infected people ending up in hospitals.

This led to the UK government recommending booster doses of the vaccine in September, initially for the elderly and the clinically vulnerable. Boosters will top up protection and help to prevent infections, especially for the most vulnerable.

Going into winter, there is the added threat of other seasonal infections. Many of these infectious diseases had initially been kept at bay by COVID measures. But with the relaxation of these measures since the summer and more population mixing, this enables the spread of these diseases as well as COVID.

This will place considerable pressure on overstretched health services dealing with a backlog of health activity due to COVID as well as continued high levels of COVID infections. Maximizing vaccine protection against COVID to reduce the effect on health services is therefore vital. However, it will be difficult for the NHS to mount a similar immunization program to the one we witnessed in early 2021.

Just as the world should have been getting ready to celebrate the first anniversary of the COVID vaccine rollouts, omicron came along to spoil the party.

The recent emergence of this latest variant of concern is worrying. It has many mutations that make it potentially more infectious and able to evade immunity from vaccines and previous infection—indeed, reinfection rates appear to be three times that of the delta variant. It is spreading rapidly in South Africa and beyond, including in vaccinated people.

This new threat prompted the UK government to extend booster jabs to all adults. Whether the boosters will provide enough protection against the new variant is not certain. To date, the government has relied on vaccine protection as the “wall of defense” against COVID. Against omicron, the current vaccines might not be enough, and further public health measures could be needed to buy time until newer vaccines can be developed.

Vaccines offer the best protection, but as good as they are, no vaccine gives total protection. Looking to the future, the threat of new variants of the virus emerging has not gone away. Whether we need more vaccine boosters will depend on how lethal the infections are, whether there is vaccine escape (that is, the immunity from vaccines is less effective against infection), and how long immunity from past infection or vaccination lasts.

Like the seasonal flu vaccines, regular COVID vaccines may be needed, and the vaccines themselves may have to be adapted to protect against the latest variant. Don’t be surprised if annual COVID vaccinations, particularly for the elderly and vulnerable, become a regular feature.