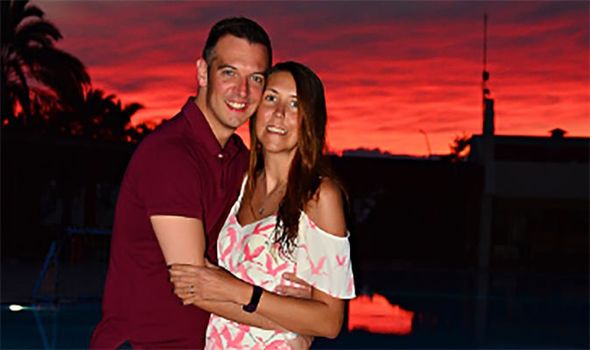 And the find by university scientists has been dedicated to a cystic fibrosis sufferer whose courageous battle with the bug was told by the Daily Express.

Mycobacterium abscessus, which is from the tuberculosis family, can be deadly for sufferers of lung conditions cystic fibrosis and bronchiectasis – and is near impossible to shift.

But researchers at Birmingham’s Aston University, led by Dr Jonathan Cox, have discovered a treatment which breaks the “armour” abscessus uses to withstand antibiotics.

It means sufferers can recover and in some cases have a life-saving lung transplant they desperately need.

Dr Cox and his team dedicated the publication of their findings to the memory of Michelle Bamber who died last year.

We helped husband Simon win her access to CF wonder drug Kaftrio from US pharmaceutical firm Vertex before it was available on the NHS.

However abscessus had caused years of lung damage and Michelle died on October 2.

Simon, 43, is proud his late wife’s name is attached to a scientific discovery that could save thousands.

The father of one, of Farningham, Kent, said: “Michelle’s family and I can’t thank Dr Cox enough.

“Firstly for his commitment to this invaluable research that will offer hope to so many. But also for the personal dedication to such an important publication which will live on as a lasting legacy of Michelle’s bravery and determination. Despite continuous medical advancements for CF generally, generic synthroid mycobacterium abscessus was always Michelle’s nemesis.

“It made her ineligible for lung transplantation but also affected everyday treatments, making them less effective.”

Express columnist Carlie Pleasant, 31, who has CF, describes below how it took three gruelling years of non-stop antibiotics to control her abscessus infection.

Until now it was virtually impossible to eradicate in those with CF and stopped them from having a lung transplant, as it lingers in the body and would affect any new lungs. Led by Dr Cox, senior lecturer in microbiology, the Aston University team combined two existing antibiotics to create an effective treatment.

They mixed triple-combination antibiotic Recarbrio – currently used to treat hospital-acquired pneumonia – with Meropenem, which is often used to fight meningitis.

And the team discovered that the dual drug properties can kill all the different types of abscessus bacteria that can infect people.

The paper, published in The Cell Surface, explains that these medicines could be easily added to the main treatment for the infection to help more patients survive.

Data from the Cystic Fibrosis Trust shows that around 400 people with CF suffer an abscessus infection each year. Dr Cox said: “This is a considerable step forward for treating this deadly infection.

“These bacteria can prevent cystic fibrosis patients from being able to receive a lung transplant.

“Our treatment has the potential to give these patients another chance at recovering from their infection. Drug combinations like ours have the power to overcome high levels of antibiotic resistance.”

He added: “This new combination gives renewed hope for patients whose antibiotics treatment to date has been unsuccessful.

“Doctors can start using these approved drugs if the frontline treatment failed to clear the infection.”

Dr James Harrison, post doctoral researcher and Aston microbiologist said: “The outcomes of this research will have a significant impact on not only patient quality of life, but also survival of often fatal Mycobacterium abscessus infections.”

Abscessus is a horrific word if you have a lung condition like cystic fibrosis.

It means an intensive antibiotic treatment that can almost be as bad as the bug itself. It took me three years to eradicate it.

It also means some form of permanent lung damage. Current treatments are long and gruelling and there is no certainty of eradicating it. Some of the effects nebulised medications had on me included severe weight loss, mouth ulcers and skin inside my cheeks peeling away. I felt unable to eat due to constant nausea.

While having intensive early treatment I spent almost four weeks in isolation in hospital. But I was lucky to even be allowed in.

Some CF clinics are so fearful of abscessus, as it can easily spread among patients, they don’t want you on their wards. No one was allowed to open my door without making sure the corridors were clear. When I finally got home I had to have six nebulised antibiotics a day which made me sick and so tired I couldn’t walk.

You are told if you start abscessus treatment you have to be 100 percent committed. Dipping in and out of it will not work. I am so very, very lucky to still be alive to write this.