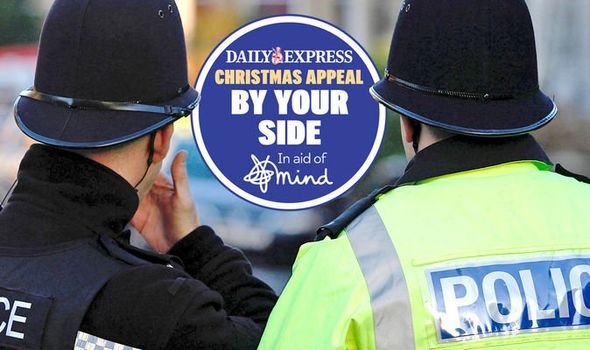 Unable to work from home, not prioritised for jabs and facing horrific acts of violence every day, amoxicillin tr k clv never before has the thin blue line been stretched to such breaking point. The psychological toll on the brave men and women who have carried on regardless has been huge and the effects will be long-lasting.

Over the past year almost seven in 10 said they had experienced difficulties with their mental health. For most it was because of heavy workloads and a poor work/life balance.

But one fifth said it was because they had to police the front line during the Covid crisis – the greatest national health emergency in history.

Today the Police Federation of England and Wales, which represents rank-and-file officers, is proud to back our By Your Side campaign as two selfless public servants speak about their struggles with mental ill health and the devastating impact it has taken.

The crusading Daily Express and Mind have joined forces to put mental health front and centre of the national conversation.

Last year the charity faced its highest level of demand since it was founded in 1946, after being approached by 20 million – about a third of the UK population.

There are now 1.6 million people waiting for mental health treatment and around 800,000 adults and 450,000 children and young people for secondary services.

Three in five said their mental health had worsened during lockdown, but one third did not seek help.

Mind says millions more are “living on borrowed time” as the far-reaching fallout from Covid continues.

This Christmas we all have a duty to act to ensure next year proper mental health support is available for everyone who needs it.

The 49-year-old suffered a catalogue of horrific injuries when risking her own life to protect the public.

Her ordeal, recognised with a Pride of Britain award, required her to seek professional help for a slew of mental health struggles.

Today she backs the Daily Express By Your Side Christmas appeal.

PC Bond was responding to reports of a crashed car. Drug dealer Gurajdeep Malhi had smashed into parked cars while fleeing police in a hired BMW.

The brave mother-of-four and grandmother-of-three tried to grab his car keys and struggled with Malhi.

She was determined to stop him because he was heading straight for the route of the Stafford 10KM road race, packed with runners, in September 2018.

During the struggle she was run over, dragged along the ground and crushed against a fence.

She was eventually pulled to safety by colleague PC Dave Mullins and had to undergo a five hour operation to save her shattered leg.

Malhi fled on foot but was later arrested and jailed for 12 years.

PC Bond, who now works for Staffordshire Police’s Professional Development Unit, said: “I always thought of mental health as something I helped people deal with in my job. Now it’s much more personal. It makes me feel uncomfortable and terribly guilty. I feel guilty about not being able to help my colleagues like I once did. I feel redundant as a police officer.

“I’ve just hit my 20 years in service and will be getting my long service medal next year. But it took me a while to accept that as I felt like an imposter.

“I miss the blue light runs, I miss talking to people, I miss helping others and making a difference.

“But now it’s me who has had to accept the help, and I have had to accept a lot of it. I still take medication to get through each day. I use worry dolls to assist me in going to sleep and keep my anxiety at bay.

“I certainly never imagined sitting my two youngest children down at the dinner table to show them a video on PTSD so that they could understand why Mummy sometimes wasn’t herself.

“But accepting this help and making all these changes have made me feel like a better person.

“I feel as though I understand more about mental health and can look someone in the eyes and say ‘I know’ while really meaning it.”

The incident left PC Bond, who is married to Darren, a serving officer in West Midlands Police, struggling with anxiety, physical trauma, and post-traumatic stress disorder.

A year after the incident PC Bond, her husband Darren and PC Mullins took part in the race to raise money for the charity Care of Police Survivors.

She covered the first 9 km in a wheelchair, but walked the final kilometre, crossing the line to rapturous applause from the crowd.

The following year, Claire walked 1 km a day for 10 days around Staffordshire to raise money for MIND.

She said: “Since returning to work right at the start of the pandemic I am more aware than ever of the impact of mental health and well being not just on the public, but on police officers and staff, who

have had to continue to work despite their own circumstances and worries.

“I have worked closely with the Police Federation and we have taken great steps to ensure the well being of our colleagues is at the forefront of everything we do. We have introduced well being conferences with different speakers, including MIND and occupational therapists, to really reach out to all members of staff.

“We have also visited all our police stations, giving out vital information to our colleagues about support available to them.

“Without the support I received from my family, my friends and my federation, I wouldn’t have made it to where I am now. There is no shame in asking for help. You are never alone; we are all in this together.”

In April last year he caught the virus during a working trip to Scotland. It put an end to his front line job with the Met Police and changed his life, and that of his family, forever.

Married father-of-two Barry, 49, now works as part of the Promotion Support Team and as the Covid Peer Support Group Lead.

He said: “Physically I wasn’t at all well and mentally, I was in an absolute mess. I’ve been a police officer since 1992 and like many of us, I’ve seen first-hand more trauma than I can count. Nothing had affected me badly before in terms of my mental health, and I’d always considered myself to be mentally resilient and capable of dealing with whatever was thrown at me. Covid changed all of that.

“I felt so low. I had got to the stage where I believed my family would all be better off without me. I felt like I was a burden to them and though I didn’t realise it at the time, I was spiralling downwards badly. I didn’t understand this at all, as I’d never experienced anything like this.

“After being pushed by my wife to get help, I referred myself to the Police Firearms Officers Association. Police officers are great at telling people to get help but terrible at asking for it ourselves.

“I did need the help and I left it far later than I should have to seek it. Eventually, I was diagnosed with Post Covid Syndrome (now known as Long Covid) which has left me with a number of medical problems.

“Unfortunately, the damage to my body has meant I can’t be operational again in my service. I only have months to go until I retire, which has made that very bitter pill just a bit easier to swallow. It wasn’t how I’d wanted or seen my police career to end though and as a long in service, experienced firearms officer, I felt as if Covid had taken my identity away.

“Mentally I’m doing a lot better than I was, which was helped by undertaking a 12-week course of counselling. I still get days that I find are hard and I feel low at times but the help I have been given helps me deal with that. “I started a peer support group at work and its main aim is to give each other emotional support through our own Covid journeys. We now have well over 180 members and we actively assist other forces in any way we can to assist their own officers.

“My advice is, when you’re able, to share your experiences. It helps in creating an open healthy culture within your working environment where there is no hesitance about discussing subjects like mental ill health.

“The most help I got was from speaking to colleagues who were also dealing with Covid issues. In some of my darkest days last summer, just the act of sharing experiences both good and bad was really vital in helping me. I didn’t feel alone anymore.

“We all need to work to change the narrative around mental health, to be more open and understanding and to realise that asking for and getting help is a sign of strength.”

We are proud to support such an important campaign, says John Apter, national chair Police Federation of England and Wales

Mental health is a topic close to many of our hearts. And we are very proud to be supporting the Daily Express and Mind’s Christmas mental health campaign By Your Side.

It is designed to remind people they are not alone and that mental health is not indiscriminate – it doesn’t matter who you are, what age you are, what job you do, it can take its toll.

As police officers we deal with trauma, danger and grief day in, day out. We see the very worst of humanity – but are expected to leave it behind at the end of a shift, then return to normal life.

The added pressures of policing the pandemic have had a major effect on officers, with more than three quarters admitting to having experienced mental health or well being difficulties in the past year alone.

There is still a stigma attached to mental illness in policing but we must change this and the Police Federation of England and Wales is committed to doing all we can to help this change become a reality. Nobody should feel like they have to hide away when there’s an issue, or bottle things up until they are broken. It’s important for officers to feel comfortable about speaking out about the difficulties they are facing with mental health and well being.

Policing is unique – helping people and saving lives is rewarding and makes a difference, but it’s often tough beyond measure.

It may be easy to forget that behind the uniform these people are mums and dads, sons and daughters, brothers and sisters. They are people who are facing the same issues as those within the communities that they police.

Last year 20 million people – roughly one-third of the UK population – approached Mind for support, the highest level since it was founded in 1946. Each month, its Infoline receives 8,000 calls, equal to 258 each day or 11 every hour.

Mind’s Blue Light Programme has recently provided a tailor-made toolkit for police officers and other emergency service workers, to support them with their mental health during the pandemic.

We are proud to support this very important campaign.