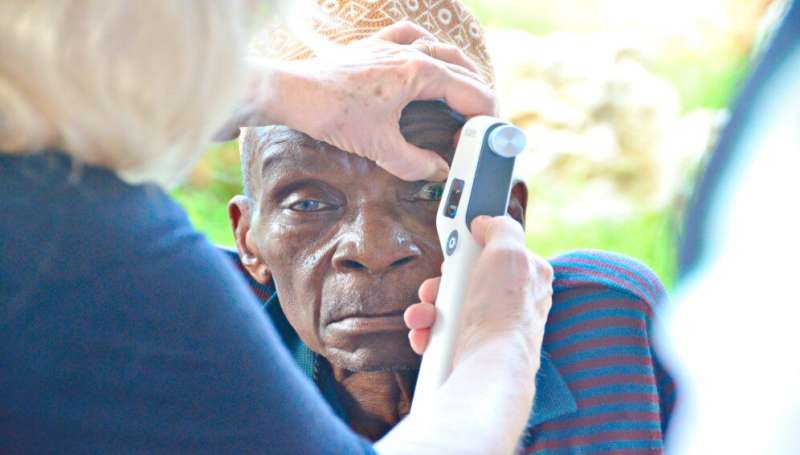 Using smartphones for eye screening and referrals could triple the number of people seeking primary care for eye problems and increase the uptake of hospital services in low-resource settings, a study says.

According to the World Health Organization (WHO), about 2.2 billion people globally have a near or distance vision impairment, with rates of unaddressed near vision impairment at greater than 80 percent in western, eastern and central subregions of Sub-Saharan Africa.

The Peek Community Screening App, the study explains, is part of the Peek Community Eye Health system that helps community volunteers to screen and make referral decisions about patients with eye problems.

The study enrolled more than 128,000 people in 36 communities in Trans Nzoia County, Kenya from November 2018 to June 2019. Half of the communities received the Peek community eye health system while the control group followed the standard approach of health-center based outreach clinics.

“We saw an increase in uptake of services across all ages and more so in women than men, whereas previous studies have found that secondary services were less utilized by young people and women,” says Hillary Rono, study author and an ophthalmologistatKitale County Referral and Teaching Hospital, Kenya.

“Our results showed that the mean attendance rate at triage by individuals with eye problems was 1,429 per 10,000 in the intervention group and 522 per 10,000 in the control group, which clearly demonstrated increased access to care.”

The research published in The Lancet Digital Health this month demonstrates the potential of using digital tools to improve access to primary care for greater numbers of patients, allowing hospitals to focus on more complex cases.

The app “generates referrals, automated short messages, service notifications to patients or guardians, and has a program dashboard for visualizing service delivery,” the study says.

Rono, who is also a researcher at the London School of Hygiene and Tropical Medicine and Peek Vision in the United Kingdom, tells SciDev.Net that access to specialist eye health resources is scarce in Sub-Saharan Africa, particularly in rural populations.

Kenya has around three ophthalmologists per million people, compared to 33 in Canada and 54 in the United Kingdom.

Barriers to eye care include lack of awareness of eye problems and eye care services, as well as the long distance travel often required to reach services, Rono adds.

Stuart Keel, technical officer for the WHO’s vision and eye care program, says that the technology has the potential to solve some vision problems, but has limitations.

“Vision screening can detect common eye conditions such as cataract and uncorrected refractive error,” says Keel, who was not involved in the study. “However, vision screening alone is not able to detect some other common causes of blindness, such as glaucoma and early stages of diabetes-related eye disease, that are common in Sub-Saharan Africa.”

In some parts of Sub-Saharan Africa, he explains, the rates of blindness are estimated to be more than five times higher than all high-income regions around the world.

Keel says that the WHO is working on a global campaign to use smartphones to deliver targeted messages for people to have regular eye checks.