Rachelle Katchenago of Menasha, Wis., lost her job as a call-center contract worker last year after the pandemic lockdowns took hold. No one was hiring.

Ms. Katchenago, 37, eventually heard of career courses, paid for by Microsoft as part of a Covid relief program. She plunged in, learning online customer service and sales skills, hoping to improve her employment prospects.

But it turned out that the technical skills, in the free classes from Microsoft’s LinkedIn job listing and training service, were not the only thing she picked up. The Wisconsin group helping her with the courses also provided career guidance, moral support, tips on résumé writing and interviews, and job contacts.

In November, Ms. Katchenago was hired as a customer service specialist at a thriving start-up based in Madison, Wis. She is making more money than in the past and she has a full-time job with a career path.

“Without that support,” she said, “I would have been at a loss.”

The nation’s jobs market stands at a somewhat puzzling juncture. There are still 7.6 million fewer people working than before the pandemic. But job openings are at record high levels, too. Some employers are even turning to incentives beyond money, like food and tuition for family members, to lure workers.

The reasons so many jobs remain unfilled are matters of vigorous and often partisan debate. Some people, including those in the Biden administration, say lingering health concerns and child care duties are holding workers back. Some conservatives argue that the extra unemployment benefits approved by Congress have lowered people’s appetite to find a job.

But labor experts and some large employers point to another issue: the so-called last-mile problem. It is one thing to have in-demand skills, they say. But good jobs also require “soft skills” like teamwork, communication and the willingness to learn new things. And then, those freshly skilled people need to be matched to local job opportunities.

Research has shown the effectiveness of programs that are local, personal and focused on addressing the last mile of the labor market. President Biden has endorsed the model. The administration’s jobs plan calls for billions in work force training including funds for “wraparound services” like counseling.

“It’s about seeing connections and building confidence,” said Beth Cobert, chief operating officer of the Markle Foundation, which supports programs to broaden job opportunities. “And you need people to do this, to help close that gap.”

Real progress in closing the last-mile gap could potentially benefit millions of Americans, economists say. Navigating the unfamiliar complexity of the labor market can be particularly difficult for the two-thirds of the nation’s workers without four-year college degrees, with low incomes and people of color.

The comprehensive training approach has been refined at successful nonprofits that have spent decades dedicated to lifting people into the middle class, including Year Up, Per Scholas and Goodwill. They arrange for assistance with housing, transportation and child care for students, when needed. And they have strong links with local employers, tailoring their programs to hiring needs. 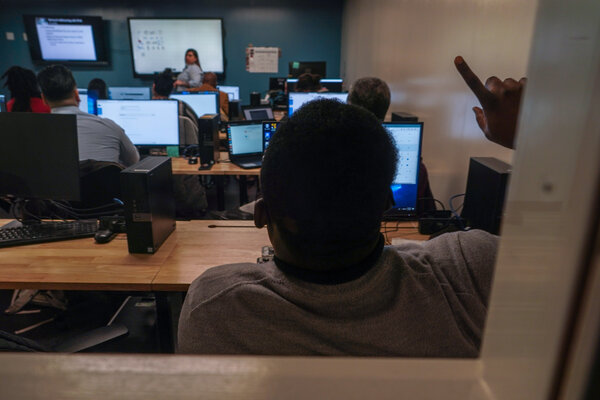 To streamline such work, the Center for Workforce and Economic Opportunity at the Federal Reserve Bank of Atlanta is building metro area websites and developing programs to help career coaches across the country pinpoint local job openings and relevant training. The websites rely on data from Emsi and Burning Glass Technologies, labor market research firms.

The project is part of an initiative coordinated by the Markle Foundation, which includes corporations, nonprofits and civic groups. Its goal is to improve the livelihoods of unemployed and low-income workers as the economy recovers.

“We need to really scale up what works well to bridge the social capital and networking gap,” said Stuart Andreason, director of the Center for Workforce and Economic Opportunity.

In its pandemic program, begun a year ago this month, Microsoft included $20 million to support last-mile organizations in the United States and abroad. Of the millions of people who have started the free courses, about 17 percent were trained through these local organizations. But they accounted for more than half of those who completed the coursework for certificates in job categories like customer service specialist, project manager and data analyst.

That evidence, according to Brad Smith, president of Microsoft, makes the case for the Biden administration’s plan to invest more in job counseling by nonprofits, community colleges and local governments.

“It’s not enough to open the door to digital courses,” Mr. Smith said. “You need funding to provide people with mentoring and coaching. That’s critical.”

Of the thousands of graduates since then, 59 percent do not have four-year college degrees and 46 percent previously had incomes in the bottom third of Americans.

Google has also given out more than 20,000 scholarships to job seekers, made through last-mile nonprofits.

This year, Google started three more certificate programs in project management, user experience design and data analysis. Along with tech support, there are nearly 1.3 million job openings in those four occupations in America. Google announced it will grant 100,000 more scholarships over the next three years.

“If your goal is economic mobility for folks, you have to do a lot more than create certificates,” said Lisa Gevelber, vice president of Grow with Google, which includes company’s skills training initiative.

One big nonprofit Google supports is Goodwill Industries. The group is best known for its stores that sell donated goods, but it also operates more than 600 career centers across the country. In the last few years, Goodwill locations, with support from Google, have offered courses in basic computer skills, as well as the professional track, tech support certificate course.

Chelsea Rucker had been living in a shelter for women in Nashville, Tenn., with her two young daughters. She managed to get a temporary job as an office worker at the local Goodwill center, and while there, learned of the Google tech support course.

Ms. Rucker, 33, started on the self-paced course, but made little progress at first. A turning point, she said, came when a manager from a nearby Google data center came to the Goodwill offices, described work at Google and job openings.

The connection made, Ms. Rucker could see a path to opportunity and her motivation kicked in. She began getting up in the predawn hours to do the Google course work before her daughters awakened. She was hired by Google in January 2019.

Today, Ms. Rucker has paid off old debts and bought a three-bedroom house on an acre of land. She has even founded a local nonprofit to assist families affected by incarceration — partly inspired, she said, by Goodwill.

The organization that helped Ms. Katchenago, gener8tor Upskilling, began in August with 19 students in northeast Wisconsin, and has added others in communities in Indiana, Virginia and Wyoming, with 167 graduates so far.

Further expansion is planned. The program hopes to produce 600 or more graduates this year, said Joe Kirgues, its co-founder.

Learning the skills needed in a field, Mr. Kirgues said, has proved to be not so difficult for most people. So the focus has increasingly been on a “whole person approach” to preparing someone for a new job, he said, coaching, encouraging, sometimes arranging transportation or shopping for new clothes for a job interview.

By design, gener8tor Upskilling caters to relatively disadvantaged job seekers. About 40 percent of its students are minorities or veterans, and 56 percent are women.

For Ms. Katchenago, things have certainly improved. With a full-time job, she no longer worries about being out of work after contracts expire every three to six months. Her current salary is about $30,000, which is $5,000 more than she made in past jobs. “It’s a blessing for stability,” she said. “I can breathe.”

In the customer service department at EatStreet, a meal delivery service that caters mainly to independent restaurants in midsize Midwestern cities, Ms. Katchenago has learned new skills like using Salesforce software. She sees steps on a career ladder. She has just taken on new duties as an “implementation specialist,” assisting restaurants adopt and use the company’s online service.

“There’s a clear path for her,” he said.