Here he is in the new Addams Family movie. There he is on a Corona commercial. He has a show with Martha Stewart on VH1 and an investment fund, and is still releasing new music.

Celebrities who cross genres can risk diluting their brand, spreading themselves too thin or alienating the core fans who propelled their rise to fame. Snoop has so far managed to avoid these pitfalls while, in crucial ways, remaining relentlessly on message.

Zooming from his compound in Los Angeles, he smoked an enormous blunt while discussing how he went from a shy musician to a multiplatform entrepreneur with several new ventures in the burgeoning cannabis industry.

To the brands he endorses, including Corona, Beyond Meat and Bic lighters, he is a gregarious spokesman. Yet Snoop has strong feelings about what he says is persistent racism in the business world, and is uninhibited in his critique of the status quo.

This interview was condensed and edited for clarity.

How have you managed to stay relevant for so long?

The easiest thing you can do is just do you. I felt like doing me would be the easiest path to me remaining relevant in the industry. It’s originality and uniqueness. I just try to do me.

OK. At what point did you think your career was going to be about more than just music?

Probably after I did the “Murder Was the Case” movie. In the beginning, I wasn’t comfortable on camera. I was kind of shy. But once I got to that stage, as far as to be able to shoot a movie that I asked for, that I wanted to be a part of, and it came to life — it was fascinating to me.

How did you overcome that shyness?

How did you think about building out a career beyond music?

We weren’t into branding or any of that at first. We were just into making good music and trying to be the dopest [expletive] in the world. My branding and my business came when I was able to go to No Limit Records with Master P, and be under his guidance and his tutelage and his wisdom. He taught me how to be a better businessman, how to be more than just a rapper, but to be about my business. It’s called show business. I had mastered show. But Master P showed me how to master the business.

Who were your mentors besides Master P?

Dr. Dre. Definitely Puffy. Russell Simmons. Guys like that, that were in my field but were able to jump outside of it and become bigger.

I’m not really somebody that likes taking information from people. I’m more about: We trading game, chopping it up, bettering each other, giving information on how my business is going, how your business is working, how I see it from the outside looking in.

I got a lot of relationships. Quincy Jones and Charlie Wilson are like uncles to me, where they shape and mold the lifestyle of Snoop Dogg, not just the business. What you learn about being a better person from somebody is more important than what you learn business-wise or career-wise.

How did you make sure you had honest brokers around you as you were getting involved in new ventures?

A lot of people say don’t mix family and business, but you recently hired your wife as your business manager.

Why not? You got to have people in your life that understand you, and understand business. She’s been my best friend for like 35 years, so she understands everything about me and how I get down. I don’t trust nobody like I trust her. At the end of the day, if something was to go wrong with me or if I wasn’t able to do it anymore, I know that everything would be in the right hands, and things would continue to run just like an operation.

How do you think about which brands you want to work with these days?

It’s got to be fun. And it’s going to make funds. So long as the word “fun” is involved, it’s cool.

Do you consider potential partners through any moral or ethical lens?

I think about all of it. I don’t want to associate myself with people who don’t have a like mind as me, just like they don’t want to associate themselves with me if I don’t have the same mind as them. Companies that get down with me know how I get down. They know the extracurricular things that I do. They know the things that I do in the hip-hop world and in the business world. 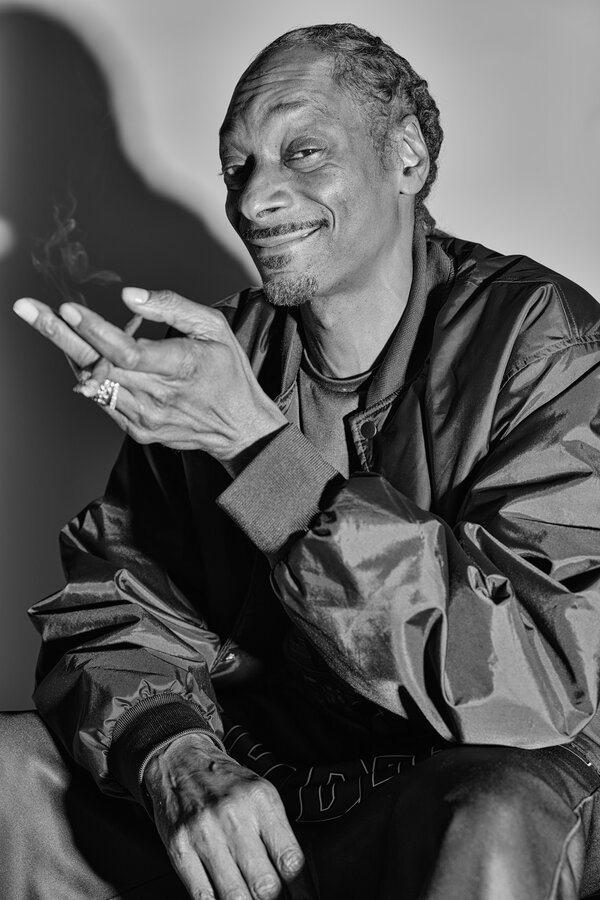 Back when you started making music, did you ever imagine how big the legal cannabis market would get?

No. Not as many times as I went to jail for it. And it’s still on my criminal record. I don’t understand how it could go from being the most hated, the most vicious thing that you could do, to now everybody’s capitalizing off of it, and they’re leaning toward a demographic that can prosper off of it, as opposed to the demographic that created the business.

We should be able to have some of our people — that look like me — as executives, as C.E.O.s, as platform owners. You know, the top of the chain, not just the spokesperson or the brand ambassador. We need to be the brand owners.

Is that part of the reason you’re involved in the business?

I helped make this business famous before it became legal. The forefathers were the ones before me. The jazz musicians, the Bob Marleys, the Cheech and Chongs, the Willie Nelsons. All of those guys laid the foundation down. I just continued what they were doing and put a little bit more spice on. I’m still paying respect to them, and knowing that this is a love branch. Cannabis, marijuana, whatever you want to call it, is all about love and bringing people together.

Is the issue of trying to close the Black wealth gap something you’re thinking about beyond the cannabis industry?

That’s why I’m trying to be one of those examples, of someone who creates his own everything, owns his own everything, and has a brand strong enough to compete with Levi’s and Miller and Kraft and all of these other brands that have been around for hundreds of years. That’s what I want the Snoop Dogg brand to be.

Do you think the platforms like Apple and Spotify are treating artists fairly?

I just don’t understand how you only get this little bit amount of money per stream. I just don’t understand the dynamics of those numbers, and how they can create these systems without Black people up top, while Black people are the ones generating the most money from these systems through the music. So I’m just trying to figure out when they’re going to cut us in in the beginning, as opposed to always letting us be the ones who get it to a point where these platforms can sell for billions of dollars, and then the Black people that made it famous get nothing.

Just like the TikTokers. All of the young Black content creators on TikTok have boycotted because they see that when they do the dances they don’t get the attention or the money. But as soon as the white dancers do it, it’s the biggest [expletive] in the world and they on Jimmy Fallon. That’s not fair. It’s not cool to just keep stealing our culture right in front of us and not include us in the finances of it all.

We need to be involved early. They always cut us out. They call Snoop after they got their companies up and are like, “Hey, Snoop, you want to be a brand ambassador?” I want some equity. Give me a piece of the pie. If I can’t get no equity, [expletive] you and your company.

We’re seeing more of that with athletes like Kevin Durant and Steph Curry, who are making investments in start-ups.

Right, because they understand that they got to get it. I mean, you would think that those businesspeople up top would say: “You know what? It’s time to change the world. We’ve got to stop treating Black people like they’re less. They’re always the ones who do the hard work, the groundwork, but we never cut them in.”

Like, why don’t we have an owner in an N.F.L.? That’s just racist. Period, point blank. We need to own an N.F.L. team. We got one half-owner in the N.B.A., Michael Jordan. But the whole league is 90 percent Black. So we still the slaves and they still the masters.

That’s why in the music game, we took the initiative to say, [expletive] that. We’re the masters, and we own our masters. We’re going to negotiate with you the way we think it should be. We changed that industry years ago, with our mentality of having our own labels.