Hundreds of leaders and companies signed a letter opposing strict limits. They did not. 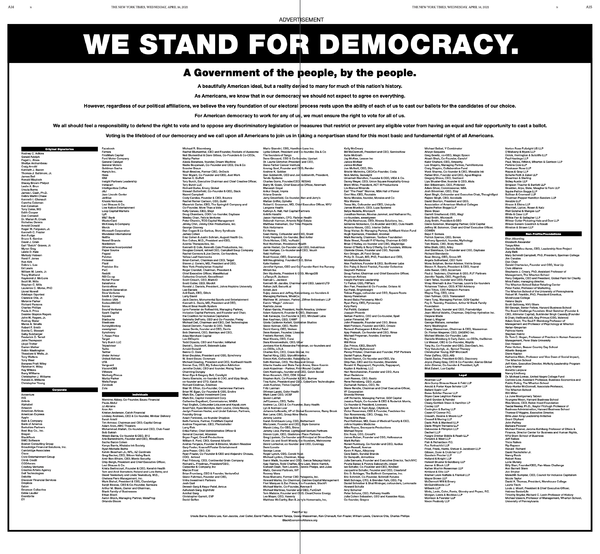 A big show of corporate solidarity

Amazon, BlackRock, Google, Warren Buffett and hundreds of other companies and executives have signed a new statement opposing “any discriminatory legislation” that would make it harder for people to vote. The statement, which ran as a two-page ad in The Times, comes amid a flurry of voting-related proposals from Republicans that have generated competing calls for corporations to take a stand and to stay out of politics lest lawmakers retaliate, David Gelles and Andrew write in The Times. And just as notable as the names who signed the statement are those that didn’t.

The statement represents the broadest coalition yet to weigh in on the issue, coming after few big companies spoke up before a restrictive voting law passed in Georgia last month. “For American democracy to work for any of us, we must ensure the right to vote for all of us,” it reads in part. The statement came together over the past week and a half, organized by Ken Chenault, a former C.E.O. of AmEx, and Ken Frazier, the C.E.O. of Merck.

The statement says that the signers should “oppose any discriminatory legislation or measures that restrict or prevent any eligible voter from having an equal and fair opportunity to cast a ballot,” a phrase that some wanted to remove, but which Mr. Chenault and Mr. Frazier considered crucial.

There are some notable omissions. Many companies declined to sign the statement, and some executives, such as Mr. Buffett, signed for themselves but not on behalf of their companies. Coca-Cola and Delta, which spoke out about the Georgia law after it was passed, declined to add their names, perhaps fearing more blowback for earlier statements and also not feeling the need to speak again. JPMorgan Chase also declined to sign the statement despite a personal request from senior Black business leaders to Jamie Dimon, who made a statement on voting rights before.

Why didn’t Walmart sign? Doug McMillon, the retailer’s C.E.O., who also chairs the influential Business Roundtable lobby group, sent a note to employees to explain the company’s position. “We are not in the business of partisan politics,” he wrote. “While our government relations teams have historically focused on core business issues like tax policy or government regulation, Walmart and other major employers are increasingly being asked to weigh in on broader societal issues such as civil rights.” The company didn’t sign the statement, but “we do want to be clear that we believe broad participation and trust in the election process are vital to its integrity,” Mr. McMillon said.

The latest round of bank earnings begins today. They’ll show a rebound from the pandemic, based on early examples: JPMorgan Chase reported $14.3 billion in profit for the first quarter of 2021, up from $2.9 billion a year ago, while Goldman Sachs reported $6.8 billion in earnings, up from $1.2 billion.

Toshiba’s potential sale is in doubt after its C.E.O. resigns. The chairman of the Japanese conglomerate appeared to throw cold water on prospects for a deal — either with CVC Capital Partners, which has offered $20 billion, or another private equity firm — after Nobuaki Kurumatani abruptly stepped down.

The U.S. loses an estimated $1 trillion a year to tax cheats. The head of the I.R.S., Charles Rettig, cited the figure while arguing for more funding for enforcement at a Senate hearing yesterday. He added that the so-called tax gap was growing in part because of cryptocurrency trading and corporate abuse of pass-through provisions in the tax code.

A top Manhattan district attorney candidate’s fund-raising is posing an ethical quandary. Tali Farhadian Weinstein, a Rhodes scholar and Justice Department veteran, has amassed $2.2 million, the biggest war chest in the race. Yet much of her fund-raising has come from hedge fund executives, and her husband is Boaz Weinstein of Saba Capital, raising questions about conflicts of interest in prosecuting financial crimes.

Companies call for bigger U.S. emissions reductions targets. More than 300 businesses, including McDonald’s and Walmart, signed a public letter urging the Biden administration to nearly double its carbon-emissions goals before an April 22 summit on climate change.

Johnson & Johnson: What we know (and want to know)

The U.S. called for a pause in injections of Johnson & Johnson’s Covid-19 vaccine yesterday, to study the rare blood-clotting disorder that emerged in six women. The news sent shock waves around the country — and the world — so here’s a quick summary of what we know.

How long will the pause last? Dr. Janet Woodcock of the F.D.A. said it might last “a matter of days,” and Dr. Anthony Fauci said “more like days to weeks, rather than weeks to months.” The C.D.C. is holding a meeting today to review the evidence.

Can other vaccines fill the void? President Biden said he had “made sure we have 600 million doses” of the Moderna and Pfizer-BioNTech vaccines, “so there is enough vaccine that is basically 100 percent unquestionable for every single solitary American.” The effect of the pause is likely to be greater outside the U.S.

What does this mean for the economy? Investors seem unfazed, given that the S&P 500 closed at another record yesterday. They could turn more jittery if the uncertainty drags out: A worst-case scenario laid out by the I.M.F. last week projected that an uneven rollout of vaccines would cut expected global G.D.P. growth 1.5 percent this year and 1 percent in 2022.

What does this mean for Johnson & Johnson? The company’s shares closed down a little more than 1 percent. The reputational damage could be more significant: J&J has faced charges for its role in the opioid crisis and use of asbestos in baby powder, and the vaccine setback may hurt its standing in the court of public opinion.

Coinbase, the cryptocurrency exchange, is set to begin trading on the Nasdaq today — and probably at a much higher valuation than the $65 billion preliminary estimate set last night. Here’s what you need to know about crypto’s move into the mainstream.

Why Coinbase matters: The company is the first major crypto business to trade publicly in the U.S. Its size means that its stock is likely to be held by mainstream index funds, giving average investors (indirect) exposure to the world of crypto. “Hopefully Coinbase going public and having its direct listing is going to be viewed as kind of a landmark moment for the crypto space,” Brian Armstrong, Coinbase’s C.E.O., told Andrew in a CNBC interview.

It will instantly become a financial giant on Wall Street:

Even at $65 billion, Coinbase’s market value will exceed that of the stock exchanges its shares will trade on: Nasdaq’s market cap is $26 billion, while ICE, the parent company of the N.Y.S.E., is valued at $67 billion. And by the way, Goldman Sachs’s market value is $111 billion.

Coinbase is profitable, taking in $322 million last year — and an estimated $800 million in the first quarter this year alone. It also made significantly more revenue from trades (0.6 percent) than did the Nasdaq (0.009 percent) and ICE (0.011 percent).

But there are also giant risks:

Coinbase benefited hugely from a run-up in cryptocurrencies’ prices in recent months, and the company warned in its prospectus that its business was “substantially dependent on the prices of crypto assets and volume of transactions conducted on our platform.”

Skeptics think competition will eventually bring Coinbase’s fat margins down, though Mr. Armstrong asserted that he didn’t seen any sign of that happening yet. “Longer term, yes, I do think there could be fee compression, just like in every other asset class,” he told CNBC.

What to make of the higher inflation numbers

In regular times, the consumer price index data released yesterday would seem to signal uncomfortable levels of inflation: The March reading showed the sharpest monthly increase in more than a decade. But this is misleading, since the latest numbers will be compared with periods when pandemic lockdown orders shut down wide swaths of the economy, amplifying the growth in prices. (The same “base effect” has made recent G.D.P. growth look abnormally strong, too.)

There are legitimate concerns about how trillions in stimulus will affect inflation. A close circle of advisers at the White House has been assessing the effects of the spending on inflation, The Times’s Jim Tankersley reports, projecting the behavior of shoppers and tracking financial market measures of inflation expectations, among other things. They believe that any price spike — which could be even bigger in April and May — is likely to be temporary (a position that Jay Powell, the Fed chair, seems to share). That’s not to say they have dismissed inflation altogether: A proposed $2.3 trillion infrastructure package would roll out over eight years, partly to reduce its impact on prices.

If inflation were to accelerate in an unexpected way, the onus would be on the Fed to step in to contain it. “There is no plan, as of yet, for Mr. Biden to consider inflation-fighting actions of his own,” Jim writes.

Betting on the final frontier

Sixty years ago this week, a Russian cosmonaut became the first person to orbit Earth, and by 1969 American astronauts had walked on the moon. This captivated Fatih Ozmen as a stargazing boy in Turkey. Having seen “the art of the possible” Mr. Ozmen dreamed of space, and now leads and co-owns Sierra Nevada Corporation, a multibillion-dollar aerospace company.

“The space economy has taken off,” Mr. Ozmen told DealBook. Last year, as the pandemic had earthlings despairing about life on this planet, private investors put a record $8.9 billion into space companies. Morgan Stanley estimates that the space economy could be worth $1 trillion or more by 2040, up from $350 billion today.

S.N.C. is spinning off its space business to take advantage of this boom. The company’s new entity, Sierra Space, is focused solely on the final frontier. It has $3 billion in active contracts, generated more than $400 million in revenue last year and has supported more than 500 space missions, including 14 to Mars.

The next leg of the space race is commercialization, and companies are rushing to stake a claim, Mr. Ozmen said. He envisions a not-so-distant future in which Sierra Space creates extraterrestrial infrastructure and sells “space as a service” to businesses and tourists. That would include shuttling explorers and entrepreneurs in its spacecraft and hosting them in inflatable habitat pods, a technology it has developed for government missions. “We haven’t even scratched the surface,” Mr. Ozmen said.

Televisa agreed to merge its content production business with Univision in a $4.8 billion deal, backed by investors including SoftBank, to create a Spanish-language streaming service. (WSJ)

The video game developer Epic Games has raised $1 billion from investors like Sony and Appaloosa Management at a nearly $29 billion valuation. (NYT)

The Senate Foreign Relations Committee is preparing to vote on a sweeping bill to counter China’s global influence; it includes money to help companies move their supply chains out of the country. (Axios)

Billionaires like Bill Gates have said they could support paying more in personal taxes, but have stayed quiet on President Biden’s proposals to raise them. (Recode)

In the wake of the meme-stock frenzy, companies are increasingly courting retail investors, whether through podcasts or on Clubhouse. (NYT)

Remember the “Leave Britney Alone” viral YouTube video? It sold as an NFT for $41,000. (Insider)

A former policy expert at Pinterest and Facebook is calling for the end of nondisclosure agreements for workers who bring up claims of harassment and discrimination. (NYT Opinion)

Like some creditors of Revlon, a woman was mistakenly wired millions by a financial institution. Unlike those Wall Street firms, she was charged with bank fraud for keeping the money. (NYT)

These are the times we live in: Mick Jagger and Dave Grohl just released a single satirizing anti-vaccination conspiracy theorists. (Rolling Stone)

We’d like your feedback! Please email thoughts and suggestions to [email protected]ytimes.com.