If the tightly interlocked, orgiastic mass of bodies wasn’t enough to make the point, the trail of spit probably did the trick.

As envisioned by a batch of new ads from a variety of companies, people should be prepared to mingle — really mingle — once millions of vaccine shots have been delivered to millions of arms.

The men’s fashion brand Suitsupply released a new campaign on Thursday that might be called suggestive, if it left anything to suggestion. It shows writhing barely clothed bodies and models making out under slogans like, “The New Normal Is Coming.”

The ads may come as something of a shock for anyone who has grown accustomed to a world of face masks and social distancing. Not so very long ago, the notion of saliva was considered so triggering that the chicken chain KFC dropped its “finger-lickin’ good” catchphrase, calling it “the most inappropriate slogan for 2020.”

There were saucy ads during the height of the lockdown, such as a campaign from the clothing brand IVRose for booty-baring pajamas. But PJs were just the thing for the homebound culture of the quarantine, meaning they fit in with the many commercials featuring melancholy shots of people separated by windows and glass doors.

With the latest crop of ads, companies are betting that people are eager for human contact.

“It’s pretty obvious that post-pandemic life is on the horizon,” the Suitsupply founder Fokke de Jong said in an interview. “We’ve done social distancing for long periods of time, and that’s conditioned people to be fearful of social interactions, which is totally understandable. But we wanted to show a positive outlook on a future where people can get back together and get close again.”

The campaign, which will run largely online, was filmed in Europe with existing couples and following pandemic production protocols. Mr. de Jong hopes the ads will drum up interest in Suitsupply clothes, which he said are not meant for the work-from-home life.

“That time is coming again,” he said. “We’re going to get rid of the sweatpants pretty quickly.”

Other companies are also betting that people will soon be more focused on how they look. Urban Outfitters is seeing more demand for dresses and other “going out-type apparel.” Gym memberships and body waxing appointments are on the rise.

Now ad makers are reacquainting customers with the idea of a world where hugs and crowded parties are not out of place — though not without some wariness. Neal Arthur, the chief operating officer of the ad agency Wieden + Kennedy, said that “every single one” of the company’s clients is seriously considering what is appropriate to show and when, now that an end to the pandemic seems to be in sight.

“Clients are all over the map right now,” Mr. Arthur said. “It’s almost like the stages of acceptance. There’s not a light-switch approach. No one is saying, ‘Let's pick a day and go all in.’ It’s an acceleration of preparation for when it’ll be clear that the prevailing sentiment is that it’s OK to be back out in the world.”

Still, Mr. Arthur noted, an industry that depends on gauging public feeling is indeed sensing a “moment for optimism that it would be foolish not to communicate.” 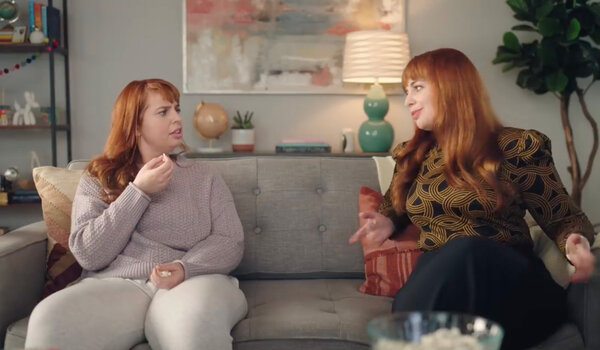 The shapewear company Shapermint came out with TV commercials this month called “Remember Dressed?” One shows a woman lounging in sweats on her couch who is persuaded by a snazzier version of herself to wear something other than soft pants. And Diesel has a steamy new campaign, “When Together,” that features couples who are reunited after a long time apart.

In a recent ad timed to St. Patrick’s Day, the beer brand Guinness had football great Joe Montana offering a “toast to our future.” “Here’s to the comeback kid in all of us,” he says.

But even as the pace of vaccinations increases and employers solidify return-to-office plans, coronavirus variants are spreading, funeral homes remain overwhelmed and scientists continue to urge caution.

Almost exactly a year ago, Delta Air Lines pulled its national advertising. It has remained quiet as it tries to be “really calculated and deliberate about when is the right time to come back responsibly and how to do that,” said Emmakate Young, the company’s director of brand strategy and marketing communications.

A new Delta campaign is slated for the end of May or early June, when more people have been vaccinated and are considering traveling, Ms. Young said. The company intends to continue showing masked employees for the foreseeable future, but is “leaning away from the loner shots, the empty airports and empty stadiums and the black-and-white,” she said.

“We’re looking for optimism and the hope of being able to get back and return to some normalcy,” she said. “But it is incredibly complex; we know that people are at very different points in their comfort level, and we want to reiterate that everything we did in 2020 is not going away.”