Shepard Smith doesn’t have a bad word to say about Fox News.

Did the network betray you? “They never interfered with what I was doing.” Is it different from when it started? “Well, I think every network has evolved since 1996.” Did you leave because you were fed up? “You know, it was time.”

Mr. Smith, the former Fox News chief news anchor with an easy Mississippi lilt, abruptly left his television home of 23 years last October after clashing with one of the channel’s conservative stars and relentless taunts from President Trump, who denounced Mr. Smith for his skeptical coverage.

In the end, it was Mr. Smith’s decision to step away. Colleagues were stunned, but friends said he had grown disillusioned by the direction of the network — a frustration compounded when the Fox News prime time host Tucker Carlson mocked him on-air — and the disconnect between its pro-Trump punditry and the reporting generated by its newsroom.

Speaking recently from his Hamptons summer home, Mr. Smith, who returns to television on Wednesday as the host of a nightly newscast on CNBC, declared a renewed focus on “the facts, the truth, the news,” adding, “It’s a complicated time with so much information and along with it, disinformation, and we just want to just cut through the noise.” 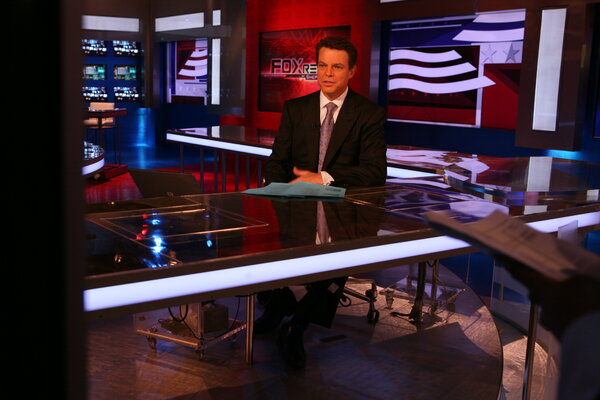 His comments might be interpreted as a subtweet of his former employer. But out of good manners or legal necessity — Mr. Smith’s representatives declined to say if the anchor was bound by a nondisclosure or non-disparagement clause — he stayed circumspect whenever the subject of Fox News arose.

“I watch a lot of news,” Mr. Smith, 56, said when asked if he had watched the network since departing. “I don’t really watch much opinion programming.”

The message: Mr. Smith is ready to move on. Still, after a career defined by his time at Fox News, which he joined at its inception in 1996, it was startling to see Mr. Smith appear on a Zoom call in a CNBC baseball cap like a veteran star player who had joined a crosstown rival.

Now viewers will decide if they’ll migrate with him. “The News with Shepard Smith,” whose marketing campaign features a black-and-white portrait of Mr. Smith in Serious News Mode and an all-caps slogan (“THE FACTS. THE TRUTH.”), is built on the just-the-facts-ma’am reputation he burnished as a straight-talking outlier to Fox News’s Trump-ier programming ranks.

Mr. Smith — who has quarantined on Long Island since March with his partner, Gio Graziano, and Lucia, their lagotto Romagnolo, an Italian truffle-hunting dog — said his new show has a strict “no pundits” rule.

“We’re not interested in helping you know how to think about something,” he said. “We’re interested in giving you the information, so that you can make your decisions and form your opinions with good, solid information. I’ve never felt like anybody’s very interested in my opinion, and on an evening newscast I’m not going to share it.”

“Good, solid information” is a journalistic virtue but not necessarily a formula for good television ratings, and Mr. Smith has his work cut out for him.

The 7 p.m. audience for CNBC is a fraction of the roughly 2.5 million viewers who watch Fox News at that hour. Before he left Fox News, Mr. Smith averaged about 1.3 million viewers in his 3 p.m. time slot, outranking CNN and MSNBC. It could be a while before he commands a similar audience.

His arrival at CNBC coincides with a shake-up of the business-focused cable network, best known for daytime stock market coverage and oddities like Olympic curling. Evenings are typically devoted to marathons of reality programs like “Shark Tank,” but Jeff Shell, the new chief executive of NBCUniversal, has signaled his intent to rethink the network’s prime-time.

Mr. Smith said he “is not here to reinvent the wheel,” and CNBC executives say there is pent-up demand for the anchor’s bland-by-design style of news. Audiences have spiked for the 6:30 p.m. newscasts on ABC, CBS and NBC, which up until recently had been dismissed as relics. For a while this summer, “World News Tonight” on ABC was the top-rated show across all of television.

Former Fox News personalities have had a mixed track record after leaving the Murdoch nest: Megyn Kelly crashed out at NBC when her morning show and Sunday program failed to catch on. Mr. Smith said he spoke with several networks before signing at CNBC. “They’re just the nicest people I’ve ever met,” he said of his new colleagues, adding quickly, “Not to cast aspersions on anyone.”

The anchor laughed when asked about the significance of a gay anchor leading a nightly newscast: “There are a lot of us — I think we’re on all the networks!” And he refrained from directly attacking Mr. Trump, though at a gala last year for the Committee to Protect Journalists, Mr. Smith pointedly denounced “intimidation and vilification of the press.” He also personally donated $500,000 to the nonprofit group, which advances global press freedoms.

So will the president notice that one of his least favorite anchors is back on TV?

“I hope he has more important things to pay attention to,” Mr. Smith said. “I honestly hadn’t thought of that.”