This Nov. 17 and 18, DealBook is holding our first Online Summit. Join us as we welcome the most consequential newsmakers in business, policy and culture to explore the pivotal questions of the moment — and the future. Watch from anywhere in the world, free of charge. Register now. 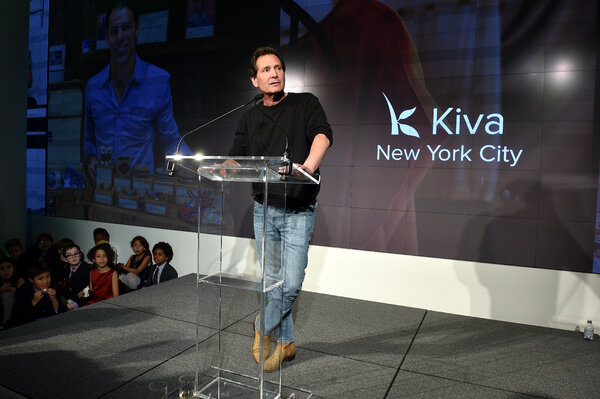 In June, amid nationwide protests against systemic racism and police brutality, PayPal pledged $530 million to support Black-owned businesses and minority communities in the U.S. DealBook’s Michael de la Merced got the first look at the latest part of its initiative.

PayPal will invest more than $50 million in eight Black- and Latino- led venture capital firms: Chingona Ventures, Fearless Fund, Harlem Capital, Precursor, Slauson & Co., Vamos Ventures, Zeal Capital Partners and one fund yet to be named. The company picked them after interviewing more than 60 firms, all of whom applied through PayPal’s website. (PayPal declined to specify how much money each will receive.)

It follows millions in grants that PayPal has given to Black-owned businesses affected by the pandemic or protests and Optus Bank, a Black-focused lender.

The rationale: PayPal had been thinking about how to erase the racial wealth gap, something that other companies have also addressed, and hit upon supporting Black- and Latino-led venture firms. These investors provide crucial capital to entrepreneurs at a stage that PayPal itself can’t — it invests in Series A fund-raising rounds and later — and are focused on businesses that bigger venture firms have largely ignored.

“So little venture money goes into minority communities,” Dan Schulman, PayPal’s C.E.O., told Michael. “This is a way to think about how we start to create wealth creation.”

PayPal will give these venture firms an instant boost, becoming a top investor. The investment “certainly moves the needle in terms of what we’re trying to do,” said Austin Clements of Slauson & Co. Samara Hernandez of Chingona added: “This is how we’re going to create structural change.”

But corporate America must do more to help fight racial inequality, both investors said. “A lot of it is just P.R.,” Ms. Hernandez said. Mr. Clements added that he and other fund managers were worried about racial economic equality fading as an issue. “We don’t know how long people will pay attention to this,” he said.

PayPal hopes others follow its lead. As many companies agonize over wading into politics and social movements, Mr. Schulman said that he believed companies have a moral obligation to act. “Values that are just on a wall are just propaganda and are worse than having no values at all,” he said. “I don’t think we can stand aside and hope that the problems of our society are just addressed by governments and nonprofits.”

France and Germany prepare new lockdown measures. Both countries are expected to introduce stricter restrictions today in response to rising coronavirus cases. Markets are falling on the news amid concern for the region’s fragile economic recovery. (Earlier today, Deutsche Bank reported an unexpectedly large profit for the third quarter.)

Hedge funds may not keep their investments secret, after all. The S.E.C. is reportedly considering dropping plans to raise the threshold for public disclosure of stock investments, Bloomberg reports. The proposed move drew nearly universal opposition in public comments.

Pfizer all but rules out a coronavirus vaccine before Election Day. The drugmaker’s C.E.O. said during an earnings call that clinical trials were going more slowly than expected. The U.S. reported more than 500,000 cases over the past week, and some hospitals are nearing their breaking point.

Microsoft gathers steam in the pandemic. The tech giant reported earnings of $13.9 billion in the three months through September, its most profitable quarter ever. Its Azure cloud-computing service now generates more sales than Windows, while video games and computer sales jumped with more people staying home.

How President Trump dodged financial ruin in Chicago. When his skyscraper ran into trouble, Mr. Trump defaulted on his loans, sued his lender, got its debt forgiven — and avoided paying taxes, The Times reports, drawing on his financial records. The project “is a case study in doing business the Trump way.”

LVMH and Tiffany may recut their deal

Exactly one year ago, the French luxury conglomerate LVMH acknowledged that it was in talks to acquire Tiffany, the American jeweler. The statement included the standard warning that “there can be no assurance that these discussions will result in any agreement.”

How right it proved: Although a $16.6 billion deal was announced a month later, the pandemic gave LVMH second thoughts and it eventually sued to cancel the deal — a move many suspected was an attempt to renegotiate the price.

It seems those efforts may be successful, as renegotiation talks are reportedly underway, with Tiffany signaling that it’s willing to accept less than the agreed-on $135 a share so long as the offer stays above $130 a share. That implies that LVMH could get as much as $600 million off the original asking price.

The C.E.O.s of Facebook, Google and Twitter will appear virtually today before the Senate Commerce Committee to answer questions about Section 230 of the Communications Decency Act, which shields online platforms from liability for user-generated content. Lawmakers on both sides of the aisle are seeking changes (for different reasons), and experts say they all miss critical points. Here’s what to expect:

Eric Goldman, a director at the High Tech Institute of Santa Clara University’s law school, has appeared at such hearings and predicts Republicans will invoke “censorship” and “free speech” often. However, he told DealBook, “everyone is in favor of censorship in D.C. right now,” insofar as both sides want more sway over content moderation, hoping the threat of litigation will motivate companies to bend.

Few use the word correctly, Mr. Goldman said. Only state actors can censor, and free speech rights only exist vis-à-vis government action. Tech companies are private actors, and users must follow their rules. In other words: There is no constitutional right to free speech on Facebook or Twitter. Legally speaking, it’s lawmakers who want to impinge on the platforms’ constitutional rights, Mr. Goldman said, since platforms are protected by the First Amendment when they act as publishers of third-party content (but not when it comes to liability, thanks to Section 230).

Something to watch: Only politicians call tech companies “platforms,” Mr. Goldman said, because “it’s a way of talking about ‘publishing’ without saying ‘publishers.’” Tech execs tend to avoid being pinned down on any particular term, given the legal gray areas.

The crux of the debate: What happens when the public square has corporate owners? People congregate on social media, but that doesn’t make Facebook or Twitter a state actor, explains Sophia Cope, a senior lawyer at the Electronic Frontier Foundation, a digital rights group. Cases against the tech companies based on freedom of speech have failed because these public forums belong to private entities. “We’re not blind to the fact that platforms don’t do moderation in a great way,” Ms. Cope said, but “you can’t just apply the First Amendment.”

The Times will provide live coverage and video of the hearings, which begin at 10 a.m. Eastern.

“Our working hypothesis, which might be disproven, is that Sept. 2, 2020, was the top and the bubble has already popped.”

— David Einhorn of Greenlight Capital in a letter to investors.

This week, DealBook is highlighting how corporate America is preparing for a momentous election. Today, Dale Buckner of Global Guardian tells Lauren Hirsch about companies’ preparations for potential unrest after the vote.

Hope for the best, expect the worst

“I think mentally we’re in a different space than we have been in previous elections,” says Dale Buckner, the C.E.O. of Global Guardian, a security services firm. “I have not seen the private sector ever have this large of a concern about what could happen.”

The Chamber of Commerce and a group of business associations representing insurance, manufacturing, retail and other industries issued a joint statement yesterday urging Americans “to support the process set out in our federal and state laws and to remain confident in our country’s long tradition of peaceful and fair elections.”

Precautions may not be needed, Mr. Buckner says, but given recent disruptions from social justice protests and the pandemic, clients want to be prepared. Four years ago, Global Guardian worked with around 10 companies to prepare for election unrest; this year, it’s around 400.

For some executives, that means monitoring social media and preparing insurance cover. For others, like businesses with essential workers near polling sites or cities that have previously seen unrest, there are different worries. About 120 Global Guardian clients are adding physical security, like installing more cameras, bringing in extra agents and hiring guard dogs.

“We’re deploying eight dogs in Atlanta,” Mr. Buckner says. “They’ll be hidden. If things start to get out of control, we feel there’s a need for that.”

C.E.O.s are also thinking about things at home. Global Guardian is working with around 60 high-net worth families on election-related security, three times as many as in 2016. “They’re out there, they’re easy to find,” Mr. Buckner says. “Public records show what they donated and what side of the fence they sit on.”

Visa’s $5.3 billion takeover of the fintech company Plaid could be blocked on antitrust grounds. (WSJ)

Concerns about Leon Black’s ties to Jeffrey Epstein have stirred up questions about who would succeed him as Apollo’s C.E.O. (FT)

Callaway Golf plans to buy Topgolf Entertainment, an operator of driving ranges, for about $2 billion. (Reuters)

How President Trump’s businesses have collected at least $8.1 million from U.S. taxpayers and political donors. (WaPo)

The U.S. G.D.P. report tomorrow will show record economic growth in the third quarter. That doesn’t mean the economy is strong. (NYT)

Californians may ditch a decades-old tax shield for commercial real estate in a ballot measure pitting supporters like Mark Zuckerberg against opponents like Blackstone. (NYT)

Apple is developing web search capabilities, despite being paid billions to use Google’s technology. (FT)

A former employee has sued JPMorgan Chase, accusing the bank of failing to stop racially driven bullying. The bank says race had nothing to do with it. (NYT)

Etsy’s big bet on masks is paying off. (WSJ)

Can you tell a Trump voter from a Biden voter by the contents of their fridge? (NYT)

We’d like your feedback! Please email thoughts and suggestions to [email protected]

Related posts:
Hot News
UPDATE 2-Fitch downgrades Sri Lanka on rising default risk
‘Exasperated’ Barnier growing ‘impatient’ as EU chief heads to London for Brexit showdown
Iranian nuclear scientist killed in attack, state media says
Tiny kitten ‘ripped apart’ after cruel thugs tie firework to its body
‘Unstoppable’ nuclear missile test in Russia is ‘worrying’ threat to US
Recent Posts
This website uses cookies to improve your user experience and to provide you with advertisements that are relevant to your interests. By continuing to browse the site you are agreeing to our use of cookies.Ok