German prosecutors have filed fraud charges against three former board members and a retired senior employee at carmaker Audi.

It is the latest legal development in the “dieselgate” scandal, in which companies and executives were alleged to have broken emissions rules.

Audi is part of Volkswagen, which in 2015 admitted cheating emissions tests on 11 million vehicles worldwide.

Munich prosecutors said on Thursday the latest four defendants were accused of “fraud, indirect false certification and criminal advertising”. They were not named.

The former senior employee charged on Thursday is accused of having initiated the development of engines for Audi, VW and Porsche vehicles equipped with so-called “defeat devices”, engine software that masked emissions levels.

The three former board members are accused of having known about the manipulations and initiated or failed to prevent further sales of affected Audi and VW vehicles at various times between October 2013 and September 2015.

Prosecutors said one of the individuals lied to Audi about their involvement in the manipulations ahead of their promotion to the board in 2016.

Audi confirmed the charges in a statement, saying it would continue to “cooperate fully with the investigating authorities in order to reconstruct the circumstances that led to the diesel crisis”.

Dieselgate has so far cost VW more than €30bn (£27bn) in compensation, fines and costs for rectifying engines.

Former Audi chief executive Stadler, 57, is due to appear in court in Germany later this year. He was at the helm of Audi for 11 years when he was arrested in June 2018. 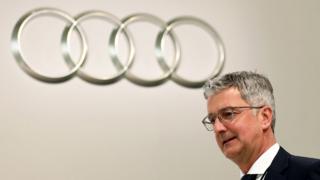 Former Volkswagen chief executive Martin Winterkorn, who was in charge of Europe’s biggest car group when the cheating was uncovered, has also been charged and is awaiting trial.

Former Audi and VW director Axel Eiser was arrested in Croatia in June on the basis of an international arrest warrant issued by the US.

In February, VW struck a compensation deal with German consumer groups representing owners of cars caught up in the scandal. But legal action continues elsewhere, including by motorists in the UK.

Several other carmakers have also been alleged to have falsified pollution levels. And in July, offices across Europe were raided over suspicions that Fiat Chrysler and truck maker Iveco could also have fitted vehicles with illegal defeat devices.

Related posts:
Hot News
U.S. can’t replace Trump in E. Jean Carroll’s slander lawsuit, judge rules
Suspected killer on the loose as discovery of two bodies sparks huge police hunt
A Mighty Ant
“Life and death.” 78-year-old Denver woman whose rental is up for sale fears move during pandemic – The Denver Post
Joe Biden desperately dodging key election question ‘haunting’ nominee’s campaign
Recent Posts
This website uses cookies to improve your user experience and to provide you with advertisements that are relevant to your interests. By continuing to browse the site you are agreeing to our use of cookies.Ok