The first store selling Gucci products in Japan, operated by Sun Motoyama, opened in Ginza in 1964 and the brand’s first boutique was unveiled in Tokyo in 1972. It was Gucci’s first store to open in Asia. The world is clearly a different place and other Asian countries have emerged as solid luxury markets, but Japan remains a stronghold, according to Gucci president and chief executive officer Marco Bizzarri. “We have never stopped believing in the Japanese market and continue to invest in it,” he observed.

The most recent signal of this commitment is the opening of the Gucci Namiki unit in Ginza, the brand’s second flagship in Tokyo’s upscale district.

The store also points to the “fundamental importance” of brick-and-mortar, said Bizzarri, despite the growing relevance of online transactions, which clearly accelerated during the pandemic and the lockdowns. “The narrative to connect with the customers, the moment in which you meet the brand, the one-to-one relations will continue to be very important, increasingly combined with the brand’s different distribution channels, and it’s all happening very quickly. The goal is to offer the best possible experience.”

The concept conceived by creative director Alessandro Michele for the Namiki store is new and will not be replicated elsewhere, explained Bizzarri.

The opening of the store, which covers three floors in a building on Namiki-dori Street — the same where Gucci started its business in Japan in 1964 — will unfold in three parts.

The first two floors will be unveiled on April 29. Over a total space of more than 7,776 square feet, they will carry a full range of men’s and women’s ready-to-wear, handbags, luggage, accessories, shoes, jewelry, silks, belts, watches, eyewear, fragrances, and the Gucci Décor collection. The brand will also offer exclusive pieces, such as handbags in precious leathers and distinctive jewelry.

Walls on the first and second levels use materials inspired by Japanese traditional bamboo work and are exclusively developed for Gucci Namiki. 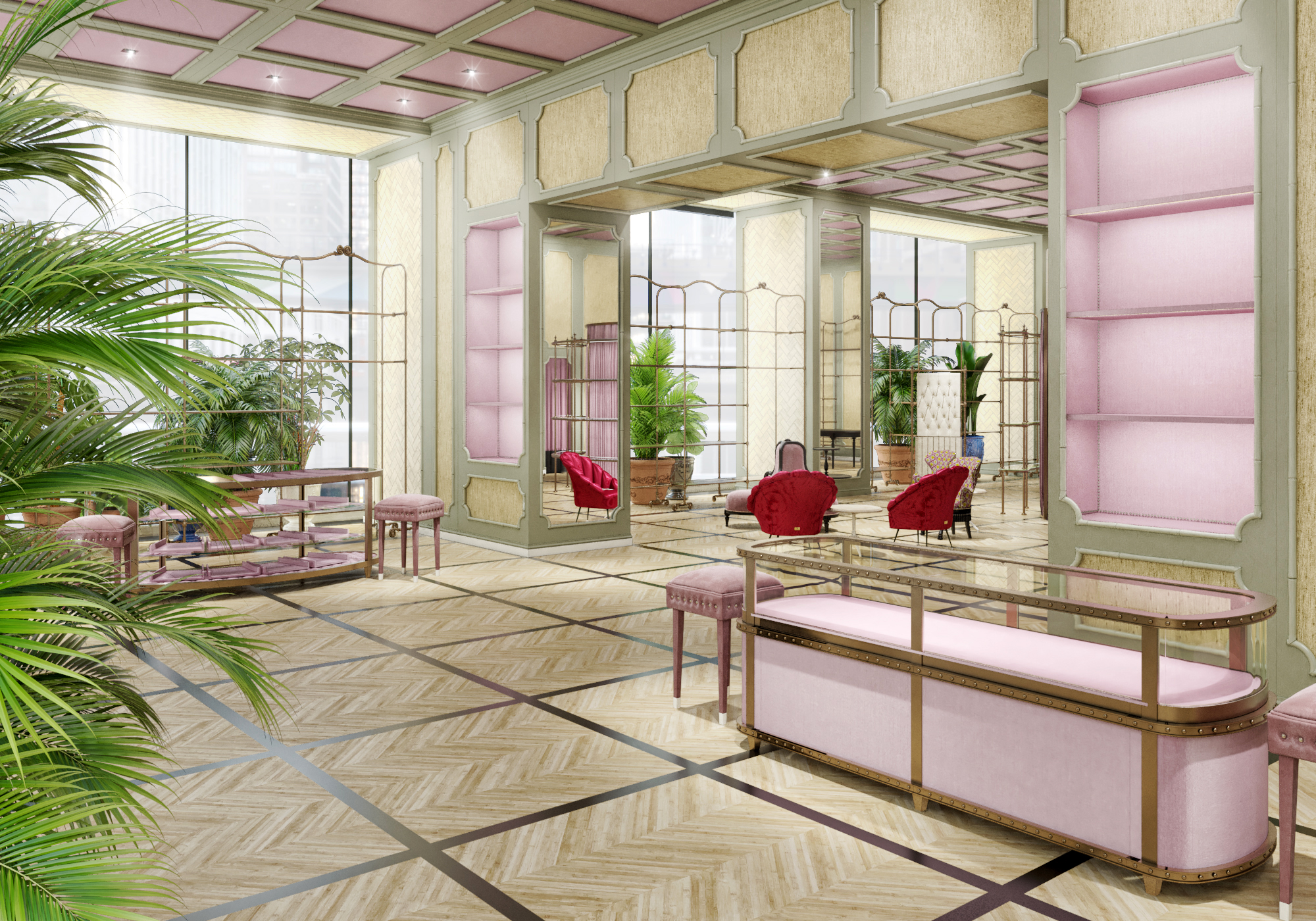 A rendering of the Gucci Namiki flagship. courtesy image

The third floor, scheduled to open in the fall, will house the Gucci Apartment, which, by appointment, will allow privacy and be dedicated to made-to-order, personalization and other special services. It will also showcase the Gucci Décor collection.

Photos from François Pinault’s private collection will be on display. “This is the first Apartment in a Gucci store,” observed Bizzarri.

Additionally, later in the year, a Gucci Osteria da Massimo Bottura will open on the fourth level of the building, curated by the three-Michelin-star chef Massimo Bottura, a childhood friend of Bizzarri’s.

One way to differentiate the stores is through food, said Bizzarri, paying close attention to the territory and giving a local flavor to each. The restaurant will be the third in the world following the first at the Gucci Garden in Florence in 2018, followed by one in Los Angeles on the rooftop of the Beverly Hills flagship.

Further linking with the country, artwork by Japanese artist and longtime friend of the house Yuko Higuchi will embellish the Osteria’s façade on Namiki-dori Street. Celebrating the opening, illustrations by Higuchi will also adorn limited-edition items, available in the store. Gucci has been collaborating with the Tokyo-based artist on several projects, including a special spring 2018 and fall 2020 kids capsule collection. One of her works also decorates one of the Galleria walls of the Gucci Garden in Florence.

Bizzarri declined to reveal the amount invested in the store.

There are a total of 67 Gucci stores in Japan.

The store may attract some additional interest in light of the Tokyo Summer Olympics, expected to kick off on July 23, but Bizzarri said this was purely a coincidence and never meant to coincide with the event. “Gucci has been working on the store for a long time, and it was conceived for local customers,” he said.

Japan accounts for 7 percent of Gucci’s revenues, which in 2020 amounted to 7.44 billion euros.

Kering chief financial officer Jean-Marc Duplaix, presenting the group’s annual results last month, said “Japan improved in the fourth quarter on a somewhat easier comp base, containing its decline to 10 percent, supported by nice growth with local customers,” in the wake of the pandemic and the lack of tourist flows.

Courting local clientele and Asia are clearly a focus in 2021, as Bizzarri revealed Gucci will also open “a very important store in Seoul” by the end of the year. A fourth Osteria — and “last,” said Bizzarri — will also find a home in that venue. In that case, Gucci will work with a Korean artist for the facade.

Gucci has recently launched several dedicated initiatives in Japan. Last June, debuting its first circular collection Gucci Off the Grid, an entire range of products were created in a special blue color exclusively for the Japanese market in a selection of genderless bags, wallets, sneakers, rtw and hats. Japanese musician Miyavi, another friend of the house, was featured in the ad campaign.

In July 2020, for the opening of the Gucci Miyashita Park store, graphic designer Tadanori Yokoo and illustrator Shohei Otomo were invited to develop new artworks dedicated to the brand, inspired by Gucci key visual codes, displayed at the store and at the Shibuya station.

Last October, Gucci released the second issue of the Chime Zine, including a special section focused on Japan, with essays, interviews and artwork related to feminism, gender and self-expression in Japanese society. Contributors include Yuki Chizui, a sushi chef and owner of a sushi restaurant with an all-female staff; Yume Morimoto, a queer feminist writer and founder of a bilingual zine, and members of WAIFU, a resistance nightlife party founded on the principles of intersectional feminism and inclusion. The cover of the Japan spotlight featured women of Bluestocking, Japan’s first feminist literary journal credited with helping to launch the feminist movement in Japan.

Bizzarri said the Gucci 9 live video call experience, offered by the Gucci Live service that debuted last May in the Europe, Middle East and Africa region, which helped discover the collection remotely, is being expanded to Japan.

Gucci, which marks its centenary this year, has been receiving additional attention from the Ridley Scott “House of Gucci” film that is currently being filmed in Italy. The film offers a dramatized version of the real-life events in the late 1980s and early ’90s that led to the murder of Maurizio Gucci — the grandson of Guccio Gucci, the founder of the Italian fashion house. In the film, Lady Gaga plays the role of Patrizia Reggiani, who commissioned the murder of her ex-husband Maurizio Gucci, played by Adam Driver.

Asked to comment on the film, Bizzarri underscored that the Gucci family is no longer involved in the brand today, and that the movie will not extend to the post-Investcorp developments and thus not be related to the current owner, Kering, owned by the Pinault family. He added that the company is allowing “total creative freedom” to the production.

“Gucci is collaborating with MGM and Scott Free Productions by providing access to the house’s historical archive for wardrobe and props,” he said.

Also, asked about rumors that he could be headed to the Agnelli family’s holding Exor, which, as reported, has acquired a stake in Christian Louboutin and Shang Xia, Bizzarri expressed “great admiration” for John Elkann, grandson of the late legendary Gianni Agnelli and chairman and CEO of Exor, but said he had “not been contacted and was not interested” in leaving Gucci. Last month, Bizzarri also denied media speculation he was headed to Ferrari, also under the Exor umbrella.