Supercars hold their value better the less you play with them, much like collectible children’s toys that are worth more when sealed inside the original packaging. But what’s the fun in that?

On sale in Montreal for $622,000, a 1990 Lamborghini Countach 25th Anniversary model looks brand-new. In effect, it is, with the plastic still on the seats. Over 30 years, it has covered only 83 miles. Powered by a 455-horsepower V-12 and capable of 190 miles an hour, the car has almost never moved under its own power.

The car went through several owners — none who drove it any distance — before it was returned to its original home, said Bernard Durand, who has been in sales at Lamborghini Montréal for 30 years.

“At this price, it’s never going to be driven,” he said. “It’s flat-bedded everywhere.”

Another Countach from that year, but with nearly 11,000 miles on the odometer, is asking $335,000 at the same dealership. Even though supercars are built to be driven, and fast, the market puts a significant premium on specimens with next to no miles on them. 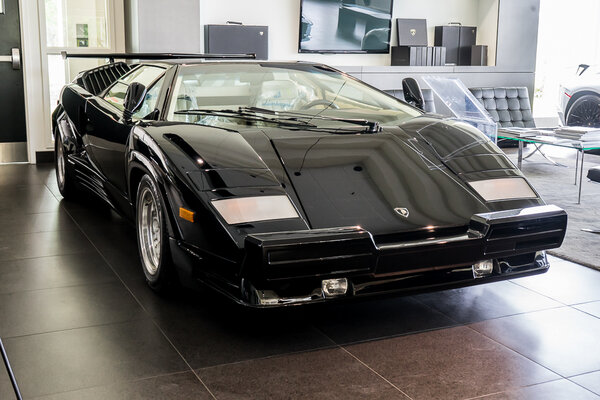 All Ferrari F40s are valuable, but a 1991 example with 1,705 miles (from the Ming Collection of barely driven cars) fetched $1,682,500 in 2019 at an RM Sotheby’s auction in Monterey, Calif. It would be interesting to compare that with results for high-mileage F40s, but with many collectors buying them primarily as investments, those are few and far between.

The market defies the voice of experts, and common sense: that cars were built to be driven, and that high-strung exotics will suffer from inactivity.

“I see no investment logic in owning cars that deteriorate through sitting and are made obsolete by next year’s improved model,” said Keith Martin, publisher of Sports Car Market, which tracks supercar sales. “If you are going to treat your supercars like Grecian urns, why not collect Grecian urns? At least they won’t leak oil.”

Many collectors concur. “Letting cars sit is the worst thing you can do,” said Jay Leno, whose large California collection includes many supercars.

“Cars are like people — they need to be exercised,” he said. “Gravity takes its toll. If the oil pump isn’t circulating the oil, it all drains down, so when you start it up dry you might spin a bearing or worse. And cars with modern electronics will deteriorate very quickly if no electricity goes through them. It’s not like a Model T, which can sit for 50 years and start right up.”

Mr. Leno said he enjoyed maintaining — and driving — his cars. “I don’t mind being owned by my possessions,” he said. “I enjoy it.”

James Glickenhaus of Sleepy Hollow, N.Y., a filmmaker and producer, is also an entrepreneur building race and road supercars under the Scuderia Cameron Glickenhaus banner. A major collector, he has custody of multiple Ferraris, as well as 1930s classics from Stutz and Duesenberg. He’s not too keen on garage queens.

The idea of preserving low-mileage supercars is “a bizarre fetish that has nothing to do with cars and nothing to do with reality,” Mr. Glickenhaus said. “Carburetors get ruined, the brake fluid turns to cement, the rubber rots, the radiators get clogged, and the oil falls apart and releases corrosives.”

He said cars couldn’t be compared to art and sculpture, whose highest purpose is served by staying stationary and being admired. “When cars aren’t driven, they aren’t cars anymore,” he said. Mr. Glickenhaus owns more than 20 cars, but he still tries to drive each at least once a month.

Scott Sherwood, a business executive in northeastern Massachusetts, has McLarens, Ferraris and a Maserati GranTurismo convertible in his collection. He recalls driving his Ferrari F40 to a meet in England, and watching as another owner trailered his car in, unloaded it for display on AstroTurf mats and then trailered it home.

“All he did was polish it,” said Mr. Sherwood, who has used his own F40 for multiple trips across Europe. “If I’d asked him what it was like to drive, he probably wouldn’t have known.

“Some of these cars are owned by people who aren’t actually capable of driving them,” he continued. “So maybe having them sit is safer.”

The F40 reached 197 m.p.h. in a 1991 Car and Driver road test. The magazine said the car “made our knees tremble and our hearts flutter.” But even then, owners were putting F40s away. “One buyer took no chances,” Rich Ceppos wrote in the 1991 article. “Without even driving it, he sealed up his new F40 in the safest place available: his living room.”

Mr. Durand at Lamborghini Montréal said the virgin 1990 Lambo was serviced regularly. So it could be driven off by a buyer, if adding miles wouldn’t instantly reduce its value. It’s possible that “somebody very rich, with no attachment to its unique status, will buy it and drive it,” Mr. Durand said. “Otherwise, 50 years from now it will still be new.”

The situation is amusing to Jas Dhillon, a San Francisco lawyer with a dozen cars, including a rare 1995 Lamborghini Diablo VTTT, a 1991 Ferrari Testarossa and a 1963 Lincoln Continental convertible that once belonged to the jazz trumpeter Chet Baker. He said the anniversary edition Countach was not as collectible as the early “periscope” cars but still highly desirable.

“It’s a game,” Mr. Dhillon said. “There are dealers who focus on this market, locating the cars and connecting them to the special class of owners who want the lowest-mileage Countach or Diablo. Cars make people do crazy things.”

He agrees with Mr. Leno — exercise your cars at least once a month. And when buying, “it’s critical you review maintenance records to ensure the car was started, driven and serviced regularly,” Mr. Dhillon said. “It can be a costly play if you do not do your due diligence.”

Curated, a Miami dealership that specializes in low-mileage supercars, is offering a 1996 Lamborghini Diablo Roadster with 1,200 miles. It recently sold a 2006 Lamborghini Gallardo with 430 original miles. A 1993 Cizeta V16T once owned by the royal family of Brunei, with just over 600 miles, is headed for an RM Sotheby’s auction in Arizona.

John Temerian, a co-founder, said his specialty was cars with their original tires, their original paint and, yes, plastic on the seats. “I can get almost double the usual market price for cars with less than 2,000 miles,” he said.

Mr. Temerian looks for cars that were well preserved and serviced. “If they’ve been neglected and need a total restoration, what’s the point?” he said. “After having all that work done, they’re not original anymore.

“But cars that have been with responsible caretakers are a blueprint for future generations, showing how it was done originally — things like stitching and the coatings on the bolts.”

Mr. Temerian comes by his interest in low-mileage cars, especially Lamborghinis, naturally. His father, a skilled Lamborghini mechanic, meticulously maintains very low-mileage examples of the Diablo, Miura SV and Countach. He starts them once a month and checks their systems, but never drives them.

“I used to resent him for being such a perfectionist and O.C.D.,” Mr. Temerian said. “I’ve never driven any of his cars. But when I got older I realized that these preservation cars were an important part of history.”

“Personally, I love to drive my cars,” he said.