Lacoste is upping its game in the U.S.

Under the direction of Robert Aldrich, its new chief executive officer of North America, the Paris-based brand has revamped its store on Broadway in Manhattan’s SoHo, repositioning the unit as its North American flagship.

The new concept, which is intended to center around art, innovation and community, will be rolled out to other U.S. stores later this year and will be utilized outside the borders of North America as well, he said.

“That store has been there for 10 years,” Aldrich said of the SoHo location. “It was due for a refresh.”

The former CEO of Ermenegildo Zegna North America, who joined Lacoste last May, said the format reflects recent changes at Lacoste in general and is designed to showcase “the identity of the brand.” That includes drawing on the company’s heritage but in a way that also appeals to today’s customer.

“It mirrors what we’re trying to do with the brand in general,” Aldrich said.

Lacoste was founded in 1933 by French tennis player Rene Lacoste, who was nicknamed “The Alligator,” which he embraced by creating the brand’s now-famous crocodile logo that is displayed on its signature polo shirts and other products.

The SoHo store also highlights the brand’s entire product range instead of just the polo shirt and increases its focus on women’s wear. Although Lacoste is a “men’s dominant business,” Aldrich said one of his goals is to continue to grow the women’s business in the U.S., so women’s wear is featured prominently throughout the location.

The 2021 Oscars: See All the Red Carpet Fashion Looks

The 4,660-square-foot store at 541 Broadway has been closed since the beginning of the year to be renovated and reopened today. 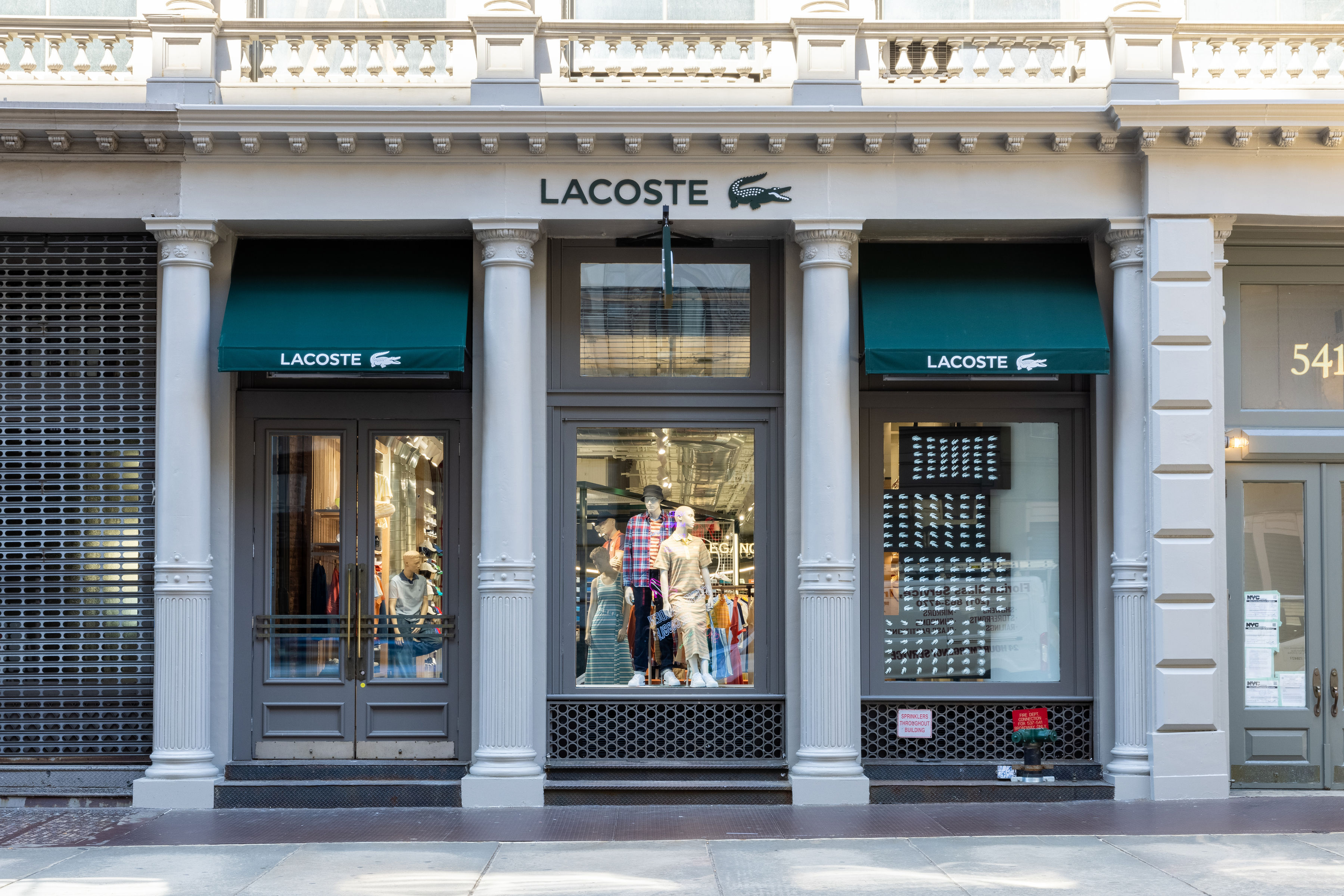 The Lacoste store is located in an historic building in SoHo.

Aldrich said the “great architectural details” of the landmark building in which the store is located also helps speak to the current positioning of the brand. He pointed to the original tin ceilings as well as the ash wood inlaid on the concrete floors, which are intended to resemble the lines on a tennis court. “We left the best of what’s old and added modern touches,” he said.

The store was designed by the local architectural firm Design Republic, which worked in tandem with Lacoste’s in-house architectural design team in Paris to create a “New York-meets-Paris spirit,” the company said. Lighting was overseen by Owl Studio and millwork was supplied by Armo.

The store, which carries the brand’s sportswear, accessories and footwear, includes an art-inspired exterior, a polo wall and a customization area. There’s also a dedicated footwear pop-up at the entrance and the dressing rooms draw inspiration from a canister of tennis balls. 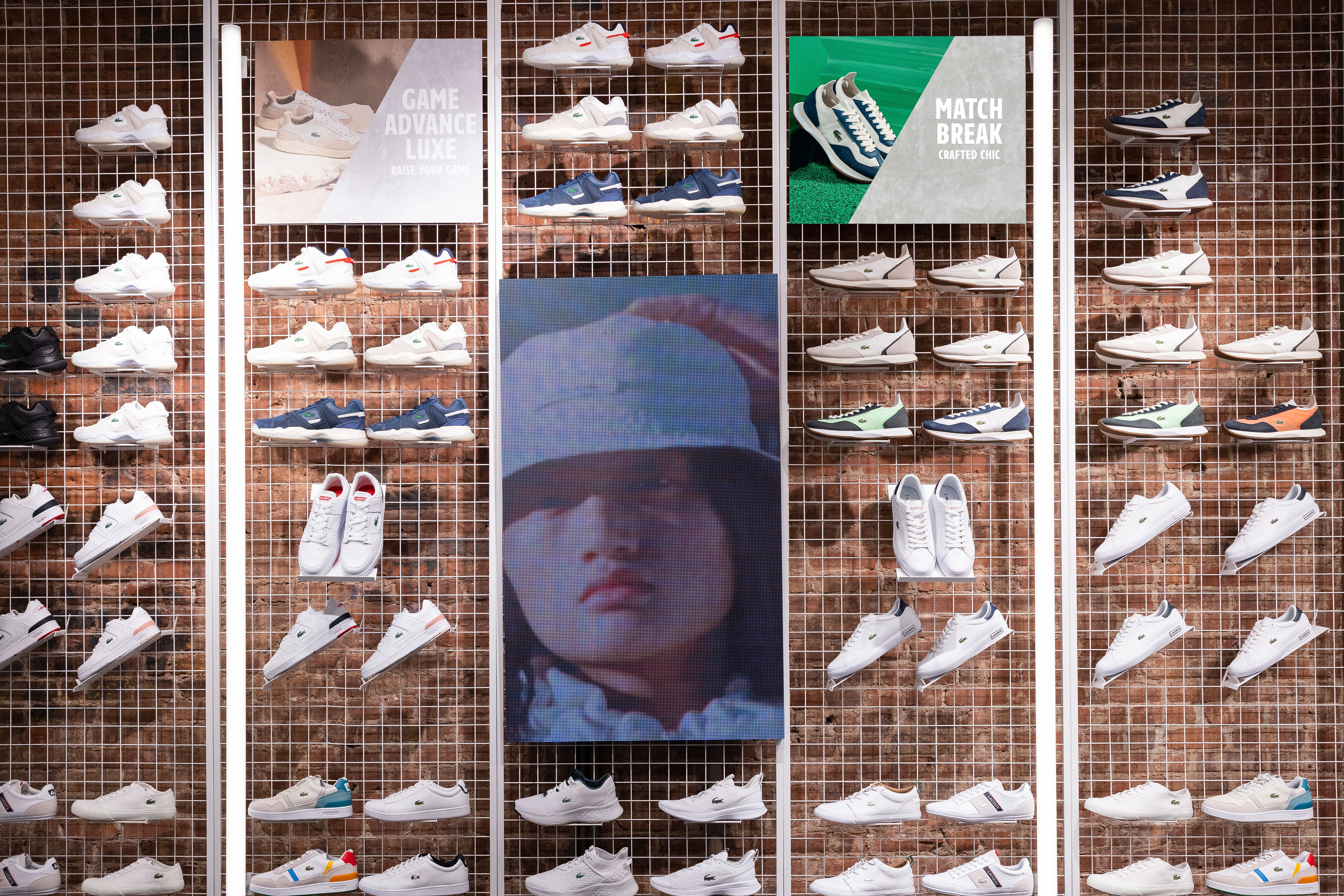 One of the highlights of the store is its polo wall in the rear that has been sorted into three distinct categories: dressy, street and weekend. “It’s not just a beautiful array of color, but it also shows that the shirts can be worn in different ways,” Aldrich said.

He pointed to the customization area as a highlight. It’s where customers can have their shirts and other products personalized by selecting from among the brand’s vast assortment of rotating digital services and designs.

“You can get personalization on the spot,” Aldrich said. “That’s also an area for future opportunity for Lacoste.”

The store is seeking to create a sense of community by partnering with brands and cultural institutions in food, fashion and beauty — once it is safe to do so — as it strives to become a destination for local shoppers. “That’s a big part of what physical retail can do,” Aldrich said.

Overall, Aldrich said Lacoste has been “performing very well” in North America despite the pandemic. “Our business rebounded very strongly when we reopened and this year, we’ve gained momentum.”

He attributed that in large part to the casualization of society during the health crisis. “The world is getting more casual and that’s Lacoste’s DNA: it’s casual, sporty, upbeat and colorful. And it offers a nice combination of creativity and iconic heritage at the same time.”

He said that while the polo shirt continues to be the brand’s anchor product, “we do more. People love the crocodile, but we’re seeing our brand and business expand beyond the polo.” He said the brand’s sweatshirts, track pants, T-shirts and other sportswear items have also performed well, particularly over the past year. 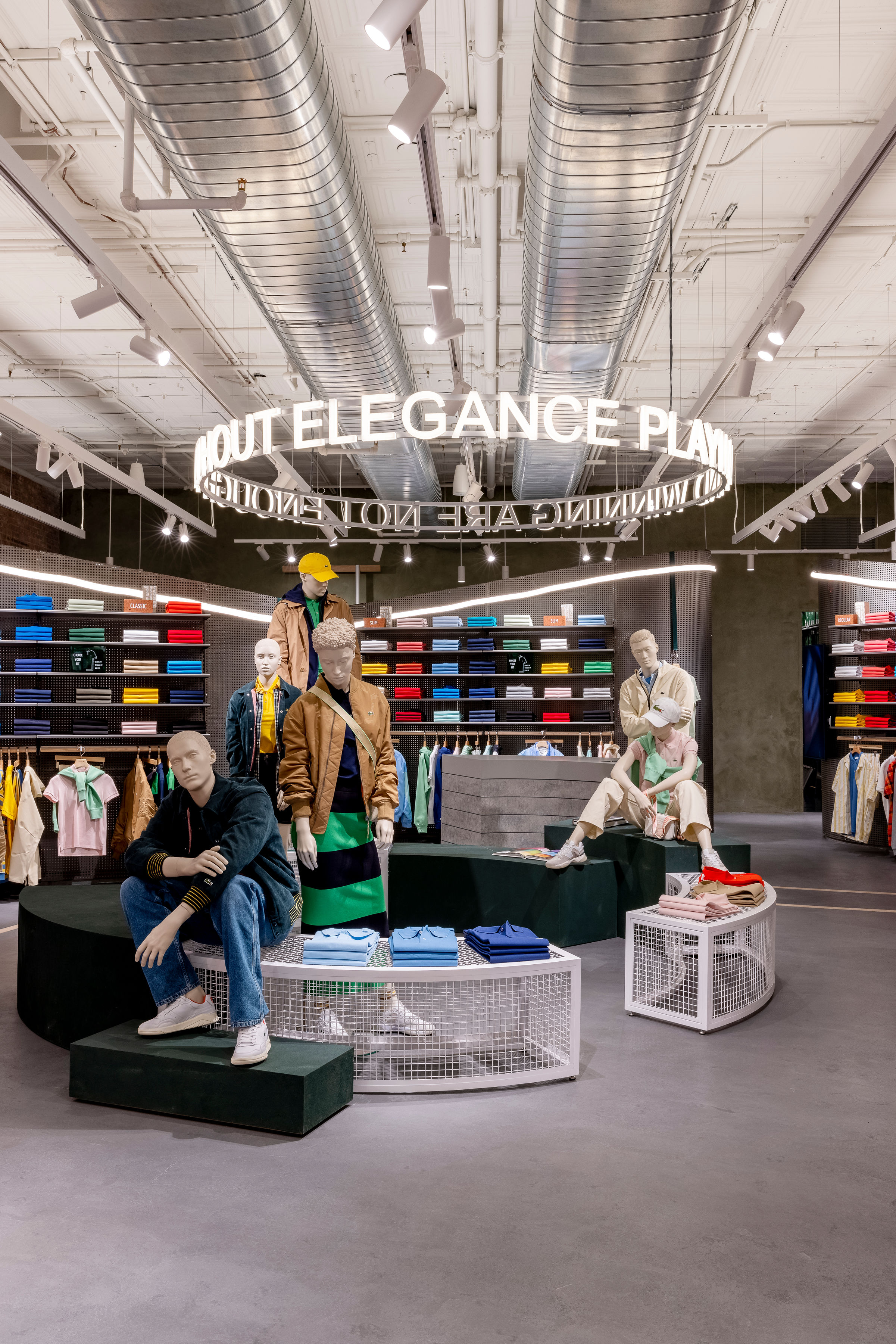 The polo wall is in the rear of the store. Jenna Bascom

The new store concept will be featured in Lacoste’s Las Vegas store in Caesar’s Palace, which will reopen with the new format at the beginning of May. After that will be the company’s store in the Aventura Mall in Florida, which is also being overhauled to accommodate the new design. Beyond that, it will roll out to other key cities in the region and will also be used overseas.

The company’s investment in its stores reflects its continued belief in physical retail, Aldrich said. Although its e-commerce business has been very strong, especially in the past year, “we’re not just relying on our digital experience.”

Lacoste operates 32 boutiques in North America, a region that ranks in the top three of its overall markets with France and China.

At the same time, he said wholesale, with partners such as Macy’s, Amazon, Bloomingdale’s, Saks Fifth Avenue and others, remains a well-developed and “very important part” of Lacoste’s total business. And although the company’s direct-to-consumer channels represent a larger percentage of the total, “wholesale continues to be meaningful and we see that continuing to be the case,” he said.