Battered by coronavirus, bemused by a summer of mixed messages and befuddled by the latest Brexit contortions, business was looking to the Chancellor for an effective, equitable and practical package of support.

What they got was a clear message: for many, the hard times start now.

Live updates on coronavirus from UK and around world

If the furlough scheme was conceived as a bridge to carry the economy to the other side of the pandemic, Rishi Sunak today launched the lifeboats.

And it was clear from the Chancellor’s statement that there will not be room for everyone and not every job will survive the crossing.

With no end to the outbreak in sight and restrictions to economic and social life set to continue for at least six months, his Jobs Support Scheme is a recognition that some businesses and jobs are no longer viable.

From November, when the transition from furlough to the new Job Support Scheme begins, many more businesses will face closure, and hundreds of thousands of people will face redundancy.

Mr Sunak’s argument is that without the new scheme it would be much, much worse.

In place of furlough, which paid 80% of employees’ wages to stay at home while the economy was locked down, Mr Sunak announced a wage subsidy scheme to support employees working just 33% of their normal hours. 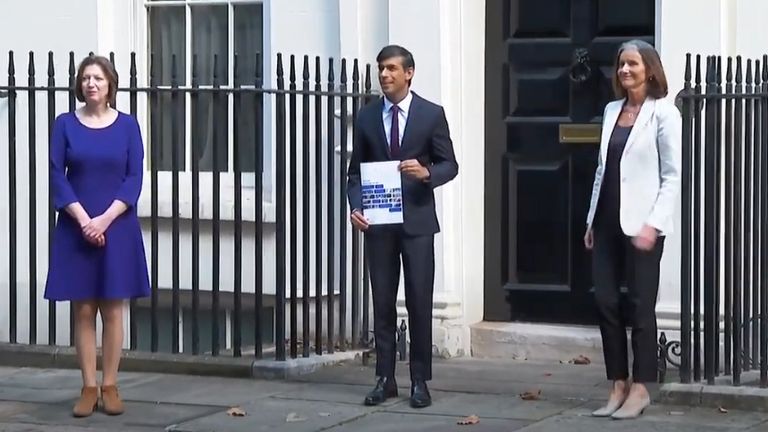 The theory is that employers will be persuaded to retain some staff part-time, with the government sharing the cost of making up their normal wages, until demand returns or restrictions lift.

One major player in the aviation industry has told Sky News that such a scheme, long used in Germany and France, could help reduce planned redundancies by up to a third.

For industries that can see a long-term path to recovery the scheme has merit, and it has the endorsement of both bosses and unions.

The sight of the leaders of both the CBI and the TUC at Mr Sunak’s shoulder before his statement was a powerful endorsement, and further evidence of this Chancellor’s penchant for presentation.

The substance of his announcement will not please everyone, however, and there will be anger in some sectors left behind.

Aviation is already planning for a four-year recovery, but the hospitality, events, sport and leisure sectors – all heavily reliant on part-time workers – cannot afford to look that far ahead and may conclude the Chancellor’s raft does not have room for them.

Many of them also contest the scientific argument for the restrictions they face, particularly the logic of the 10pm closing time for pubs and clubs.

For many, last orders may not be far away.