Oil prices are falling sharply after an unprecedented collapse in the value of US oil that saw costs fall into negative territory for the first time.

Brent crude, the international benchmark, fell below $20 a barrel at one stage on Tuesday morning – a drop of almost 20% – as concerns grew that global storage space was running out.

Demand has collapsed because the disruption caused by the coronavirus crisis means there is a massive supply glut. US benchmark West Texas Intermediate (WTI) futures contracts for May were priced at -$40 a barrel on Monday, meaning traders were actually being paid at least $40 to buy a barrel of oil.

It reflected the fact that holders of the contracts could be left with a load of oil and nowhere to store it. 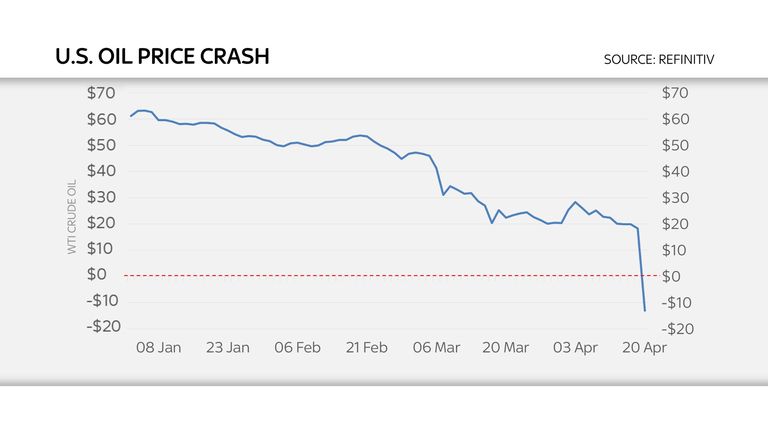 Analysts said Brent turned sharply lower on Tuesday as the market realised that even sharp production cuts – ordered by the so-called Opec+ group of oil-producing nations from next month – would still mean far more oil would be pumped than is needed for a saturated market.

Contracts for Brent crude hit $19.82 on Tuesday – building on falls late on Monday.

There was contagion on stock markets as the oil majors on the FTSE 100 helped drag the index 2% lower.

Royal Dutch Shell and BP shares were trading more than 4% down though mining stocks led the fallers as investors pondered what the oil price movements said about demand in the global economy.

Emma Wall, head of investment analysis at Hargreaves Lansdown, said: “Coronavirus, as with so much of the market movement over the past two months, is at the bottom of the rout.

“Without a fully-functioning economy – industry, agriculture and services – there is a reduced demand for oil, and a heightened risk of recession.” Despite the dive in oil costs, there may be little change to prices on UK forecourts for motorists – the few using their vehicles.

The RAC said there was scope for unleaded costs to fall to levels not seen since 2015.

The motoring group’s fuel spokesman, Simon Williams, added: “It’s right that retailers charge a fair price for fuel that reflects the price of the raw product, and in theory petrol prices could fall below £1 per litre if the lower wholesale costs were reflected at the pumps.

“But at the same time people are driving very few miles so they’re selling vastly lower quantities of petrol and diesel at the moment. This means many will be at pains to trim their prices any further.

“We also continue to be concerned about smaller forecourts that provide a vital service in areas where the supermarkets don’t have a foothold as many are already finding conditions tough with sales having fallen off a cliff since lockdown.

“It would be bad news all round if these forecourts shut up shop for good.”

Related posts:
Hot News
Man fatally stabbed in downtown Denver is identified
Nancy Pelosi and Steven Mnuchin continue talks on a relief package.
‘Nanny state nonsense!’ Philip Davies blasts chaotic lockdown rules ‘They’ve got NO idea!’
Bloke who grabbed man’s genitals in station toilets uses ‘I tripped’ as defence
Coronavirus: Pandemic to cause ‘greatest surge in child marriages in 25 years’, charity warns
Recent Posts
This website uses cookies to improve your user experience and to provide you with advertisements that are relevant to your interests. By continuing to browse the site you are agreeing to our use of cookies.Ok