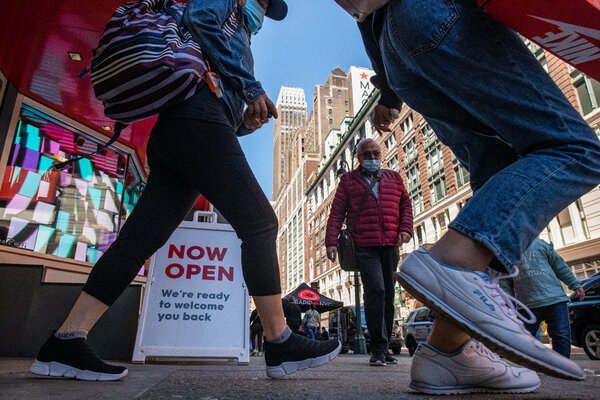 WASHINGTON — The U.S. economy is rebounding from the pandemic downturn faster than expected and is on track to regain all the jobs lost during the coronavirus by the middle of next year, partly as a result of enormous amounts of federal spending that will push the budget deficit to $3 trillion for the 2021 fiscal year, the Congressional Budget Office said on Thursday.

New forecasts that incorporate the $1.9 trillion stimulus package that President Biden signed into law in March give little credence to warnings by Republican lawmakers and some economists that runaway inflation from all that spending could cripple the economy. Instead, the budget office predicted that a recent spike in prices for cars, airline tickets and other products would be temporary and begin to recede this year.

Administration officials downplayed the deficit projections and focused instead on the predictions for economic growth, saying the strong numbers validate Mr. Biden’s push to douse the economy in stimulus and reinforce their view that inflation poses little threat to the recovery.

The budget office, which is nonpartisan, predicted the economy would grow 6.7 percent for the year, after adjusting for inflation. That would be the fastest annual growth in the United States since 1984. It is significantly faster than the budget office and the Biden administration had each projected this year.