GETTING CARRIED AWAY: Britain has a long history of royal, and political, wives, consorts and mistresses flexing their power behind the curtain, and bossing around their men. Lady Macbeth and Anne Boleyn come to mind, but there have been countless others — fictional and real — at the royal palaces, and at No. 10 Downing Street.

Over the past few days Carrie Symonds, Boris Johnson’s fiancée and the mother of his youngest child, has proven a major power broker in the macho land of No. 10, the official residence and office of the British Prime Minister.

According to widespread British press reports, Symonds led a campaign to eject one of Johnson’s top aides, and would-be chief of staff, Lee Cain and, in doing so, also got rid of Dominic Cummings, the prime minister’s divisive chief adviser who helped him to win last December’s election.

Cummings was also the firebrand director of the Vote Leave campaign during the Brexit referendum, pushing hard to ensure that Britain left the European Union for good.

As part of her own campaign, Symonds also made sure her ally, the former journalist and political p.r. Allegra Stratton, was handed the newly created job of Downing Street press secretary. Stratton, who is reported to be strategic, smart and competent, will soon be handling Johnson’s media briefings, “The West Wing”-style.

First Ladies Fashion Through The Years 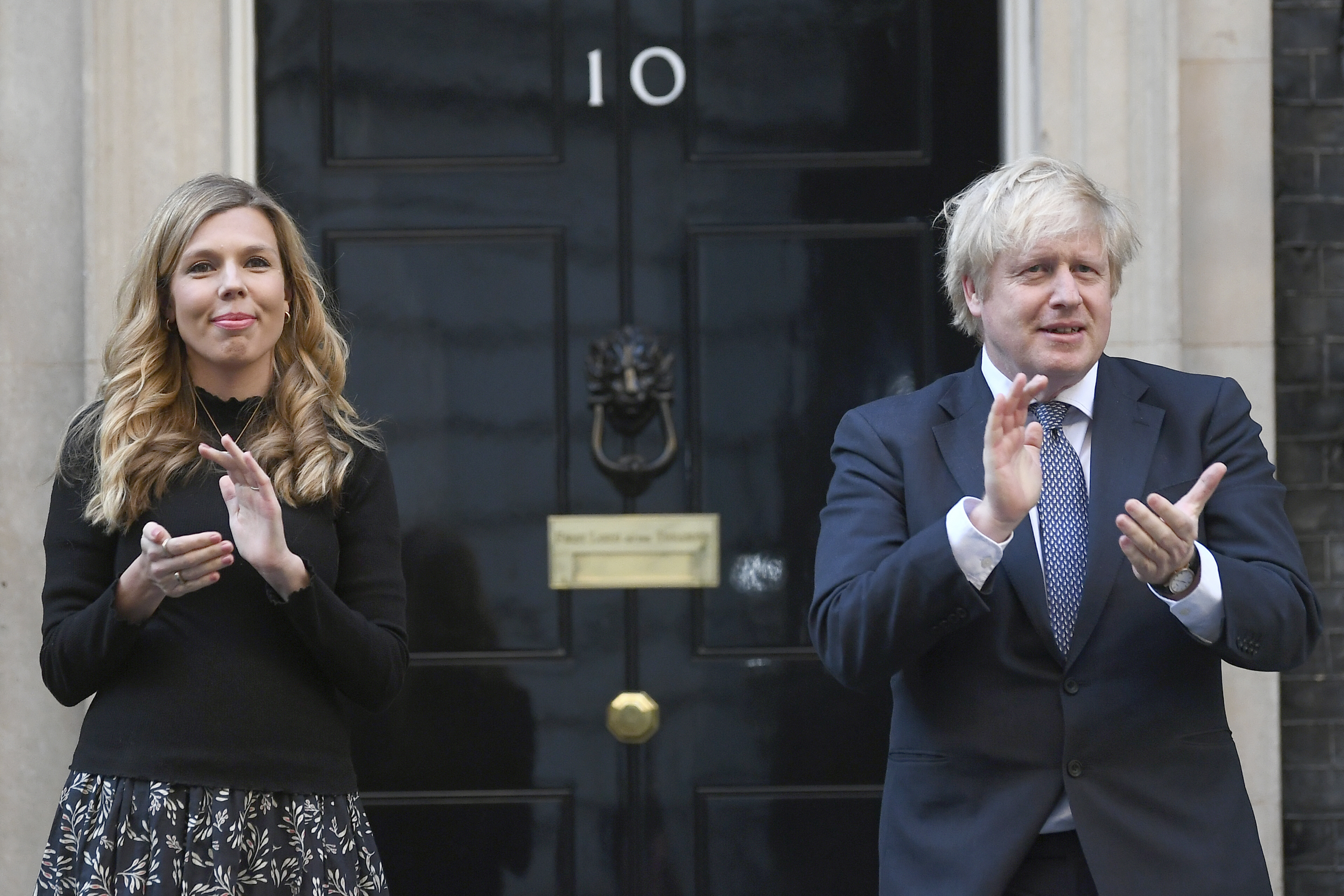 Symonds and Johnson earlier this year clapping for the National Health Service in front of No. 10 Downing Street. AP

For better or worse, Johnson had relied heavily on both Cain and Cummings, both of whom abruptly left Downing Street late last week.

Those sympathetic to Symonds argued that she wanted both men out because they were using Johnson and were disloyal and obstructive. Symonds’ detractors describe her as meddling and controlling with an inflated sense of self.

The 32-year-old Symonds certainly does have nerves of steel — and is tuned in to the mood of many British Millennials, and the Gen Z generation.

An environmental campaigner and marketeer for Oceana, a nonprofit ocean conservation organization, Symonds was also a former head of communications for the Conservative Party. She campaigned for Johnson when he successfully ran for a second term as London’s mayor in 2012.

According to the Oceana web site, Symonds’ work involves supporting the Bloomberg Foundation’s Vibrant Oceans Initiative and communications related to Oceana’s “Save the Oceans, Feed the World” initiative and its campaign to reduce the use of plastics.

In August, it was widely reported that Symonds had been barred from entering the U.S. due to a past trip that she had taken to Somaliland to discuss sea pollution and women’s issues with the self-declared president there.

Johnson and Symonds began their relationship in 2018, and got engaged last year, a few months before the prime minister agreed to a divorce settlement with his second wife, Marina Wheeler.

Symonds revealed her pregnancy on social media earlier this year, and gave birth to the couple’s son Wilfred Lawrie Nicholas, known as Wilf, a few weeks after Johnson, suffering from a severe case of COVID-19, left the intensive care ward.

Before little Wilf came along, Symonds and Johnson were tending to Dilyn, a Jack Russell cross and rescue dog, a permanent fixture on Downing Street.

Much of the British press is in a tizzy about Symonds’ reported maneuvering, remarking how badly it reflects on Johnson and his ability to lead during what has been the toughest time for a prime minister since World War Two. 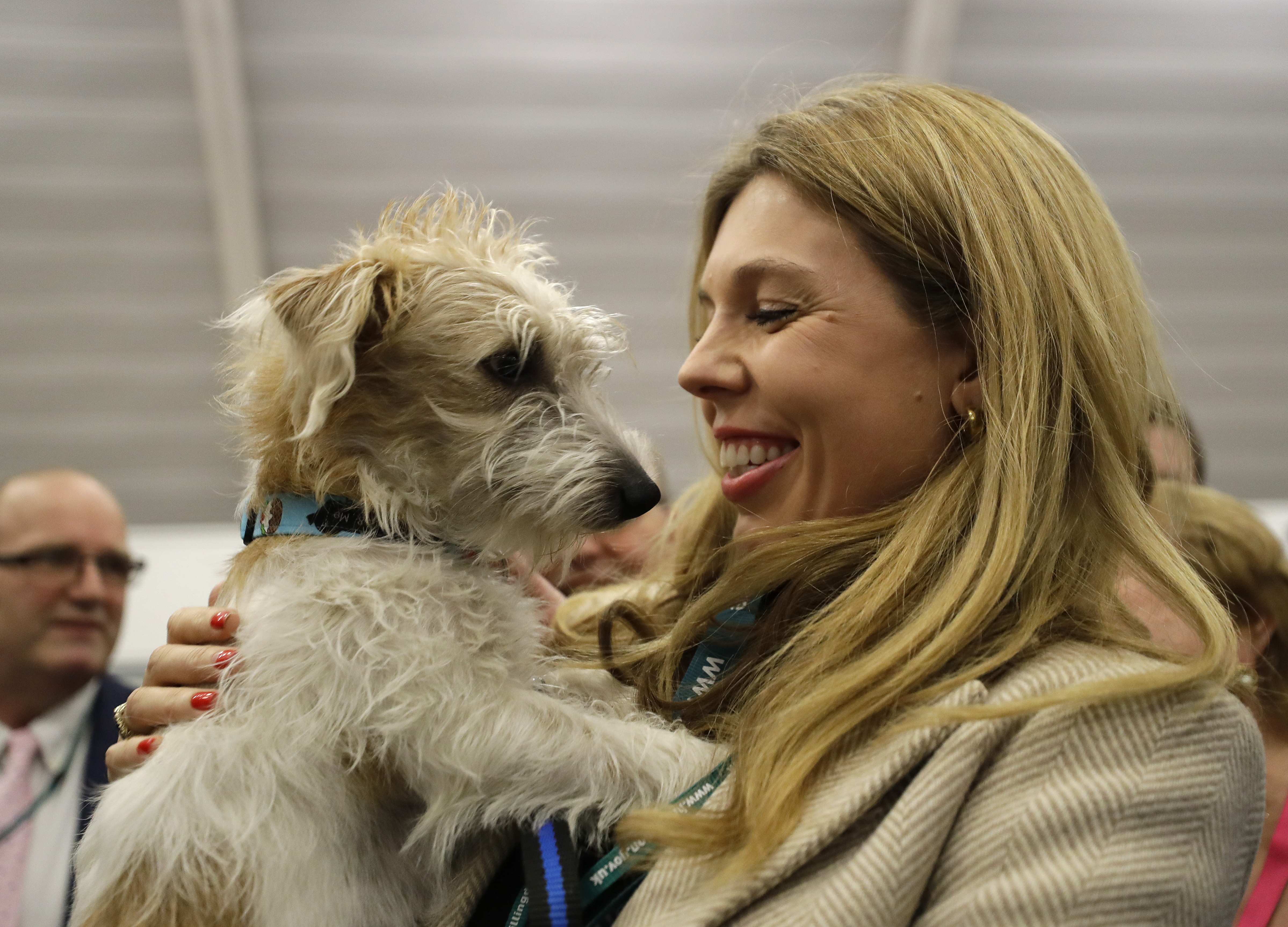 Symonds and the couple’s dog Dilyn on election night in 2019. AP

Britain is currently in the thick of a four-week lockdown; COVID-19 is now tearing through the country’s poorest communities in the north of England, and the U.K. still needs to negotiate a key trade agreement with the European Union before it leaves the bloc for good on Jan. 1.

Buckling to the demands of his fiancée, who is not an elected official, isn’t good for Johnson, according to some.

“Carrie Symonds running the show in Downing Street? I thought we’d moved on a bit since the days when you had the king’s ear because you were close to him,” wrote Melanie McDonagh in the conservative magazine The Spectator — where Johnson served as editor for six years until 2005.

“If Symonds is calling the shots inside Number 10, it’s not because of her former role and qualifications, but because she is the PM’s fiancée. It is a pretty undignified way to run a government — and presumably means that people looking to influence the PM will try to get Carrie’s ear.”

Dan Hodges, writing in The Mail Online, pointed out that “previous political spouses have tendered general advice and support. But that’s not what happened in this instance. This is how a banana republic operates, not a mature Western democracy.”

Sarah Sands, writing in the same publication, said “not since Henry VIII has there been such a public row over the influence and power of consorts and advisers.”

Sands noted that some have compared Symonds to Anne Boleyn, who was shameless in her attempts to control Henry VIII, until he turned on her, and had her head chopped off.

Still, Sands likes the idea that Johnson may be shifting away from the No. 10 macho culture, and paying more attention to the women in his life.

“He has always been more at ease in the company of women. His relationship with his mother [the British artist Charlotte Maria Offlow Johnson Wahl] is close,” she wrote. “He took his intellectual position on Brexit from his then wife Marina Wheeler. Now he is listening to Carrie Symonds. A new No. 10 era begins.”