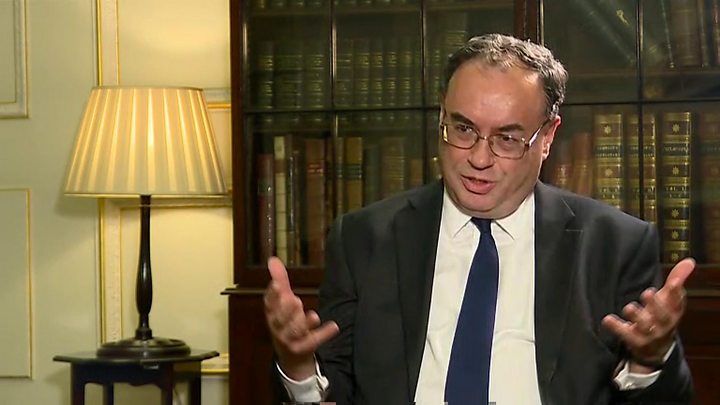 The Governor of the Bank of England has backed the government’s decision to end its furlough scheme in October.

Andrew Bailey told the BBC it was important that policymakers helped workers “move forward” and not keep them in unproductive jobs.

He said coronavirus would inevitably mean that some jobs became redundant.

The Bank also predicted the economic slump caused by Covid-19 will be less severe than expected, but warned the recovery will also take longer.

More than nine million jobs have been furloughed under the government’s job retention scheme, but the Bank expects most people to go back to work as the economy recovers.

Trade unions have urged Chancellor Rishi Sunak to extend the scheme, which pays a share of workers’ wages, to avoid mass job losses.

However, Mr Bailey said it was right to focus on helping people to find new jobs.

“It’s been a very successful scheme, but he’s right to say we have to look forward now,” he said. “I don’t think we should be locking the economy down in a state that it pre-existed in.”

The Bank said a faster easing of lockdown measures and a “more rapid” pick-up in consumer spending had helped the economy rebound faster than it had assumed in May.

Its latest Monetary Policy Report showed spending on clothing and household goods were back to pre-Covid levels.

However, the Bank warned of a “material” rise in unemployment this year as it held interest rates at 0.1%.

He said: “We have had a strong recovery in the last few months. The pace puts the economy ahead of where we thought it would be in May.”

However, Mr Bailey cautioned against reading too much into recent figures: “We don’t think the recent past is necessarily a good guide to the immediate future,” he said.

The Bank said spending on leisure and entertainment, which accounts for a fifth of all consumer spending, remained subdued.

Business investment was also weak, which would weigh on the recovery.

The Bank expects the UK economy to shrink by 9.5% this year.

While this would be the biggest annual decline in 100 years, it is not as steep as its initial estimate of a 14% contraction.

The Bank said the UK still faced its sharpest recession on record, with the outlook for growth now “unusually uncertain”.

Mr Bailey said it was the “largest quantum of uncertainty in a forecast” that policymakers had ever published.

This compares with growth estimates of 15% and 3% respectively, in a scenario the Bank set out in May.

Unemployment is expected to almost double from the current rate of 3.9% to 7.5% by the end of the year as government-funded support schemes come to an end.

Average earnings are also expected to shrink for the first time since the financial crisis.

The Bank said more workers faced a pay cut or freeze in 2020, adding: “In many cases, bonuses have been scaled back or withdrawn altogether for this year.”

Its latest forecasts are based on the assumption that there is no second wave of the virus and that there is a smooth transition to a new EU free trade agreement at the start of 2021.

Meanwhile, a fall in energy prices and the temporary VAT cut for hotels, theme parks and other hospitality businesses means the cost of living is expected to barely rise this year.

The Bank expects inflation, as measured by the consumer prices index (CPI), to fall close to zero by the end of 2020, before gradually rising back to its target of 2%. 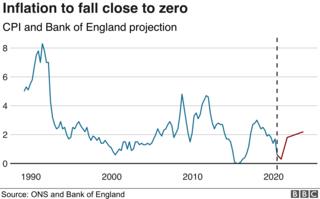 The Monetary Policy Committee (MPC) said it would not even think about raising interest rates until there was “clear evidence” the recovery had taken hold.

Mr Bailey also signalled that policymakers were against using negative interest rates any time soon, adding that such a move may have unintended consequences.

It could stop the UK’s already fragile banks from lending, or lead to customers withdrawing their money and holding it in cash.

“They are part of our toolbox,” said Mr Bailey. “But at the moment we do not have a plan to use them.”

He said the public may find the policy difficult to understand. “There would be a lot of explaining to do on what this means, why we’re doing it, and what the benefits would be.”

Ruth Gregory, an economist at Capital Economics, said the Bank was likely to increase its money printing programme by a further £100bn later this year.

She also expects the Bank to keep interest rates at 0.1% “or below” for “at least five years”.

Are banks passing rate cuts on?

Millions of households that already had a variable-rate mortgage have benefitted from recent interest rate cuts.

However, the Bank said borrowing had become more expensive over the past six months for first-time buyers and others moving up the property ladder, particularly for people with small deposits.

Lenders said they were restricting credit due to the uncertain economic outlook.

One in six mortgages in the UK is currently subject to a payment holiday because of the pandemic.

Stuart Paver, the managing director of Pavers Shoes says the pandemic is the “worst shock” the company’s suffered since it was founded by his mother in 1971.

The company which has always been profitable, has now lost £7m over the past five months.

“It’s about survival and how you come through and how you have a business that can continue to employ as many people as possible, so it was really batten down the hatches ..and really just sort of work hard to make sure we were secure”.

The company is now gradually reducing the number of furloughed workers and turnover in the stores is picking up, but Stuart Paver says it’s still down 40% from last year. Normally in a recession, he’d expect to lose between 5 and 8% of his turnover.

Mr Paver thinks recovery for businesses like his depends on consumer confidence.

“There’s still a lot of people that won’t venture into town.. we just need those people to become confident and come back in”.