Americans have become accustomed to summoning just about anything on demand, from groceries to car rides. Now it’s just as easy to get paid when you want.

As the coronavirus pandemic squeezes household budgets, workers and employers alike are increasingly turning to pay-advance apps with friendly-sounding names like Earnin, Dave, Brigit and Rain. They allow users, for a sometimes-optional fee, to request money ahead of payday. One even briefly offered a program for those waiting for slow-to-arrive jobless benefits.

And many customers see them as lifelines.

“I turned to those pay-advance apps to compensate where I couldn’t,” said Tasha Ayala-Spain, an American Airlines employee from Upper Darby, Pa., whose hours were slashed this year. She has used Dave and Earnin to get advances of up to $200 per pay period.

“It wasn’t like a loan to a bank,” said Ms. Ayala-Spain, who sometimes worked 50-hour weeks before the pandemic, loading and unloading baggage, mail and medical equipment from airplanes. “You don’t have to pay interest.”

The appeal is obvious: For a few dollars or less, users can cover a bill that comes due in the middle of a pay cycle or get cash for an unexpected expense, like a wildfire or hurricane evacuation. By tapping their earned but unpaid income early, they can avoid overdraft fees, late charges or worse — more predatory lenders. And come payday, the advance is repaid from their bank account or directly from their paycheck.

But these services, which millions have downloaded, come with question marks. Some customers have sued, regulators across the country are looking into their practices, and consumer advocates fear that the apps are glossy packaging for the kind of lending that can leave users stuck in an expensive cycle of debt.

“It’s possible it’s helping them cover their bills and avoid overdraft and higher cost loans,” said Alex Horowitz, a senior officer for the Pew Charitable Trusts’ consumer finance project. “It’s also possible it’s leaving them without enough money on payday so they turn to them again.”

The apps generally come in two flavors. Some, like Earnin and Dave, are open to the public and can require access to your transaction history or work time sheets. Earnin may even use your phone’s GPS to check work attendance. Others, like PayActiv, DailyPay and Rain, are offered through employers as a workplace benefit.

Their popularity has grown rapidly. Last year, workers tapped their paychecks through workplace providers an estimated 37 million times, gaining access to more than $6 billion, or nearly double the amount in 2018, according to Aite Group, a research company. And DailyPay said the number of users who tapped money for coronavirus-related reasons had increased 400 percent during the early months of the pandemic.

“Maybe the user’s income hasn’t been affected by Covid but someone else in their household has had their hours reduced or has been laid off, resulting in less overall income,” said Leslie Parrish, a senior analyst with Aite.

“I cannot change the level of salary, but what I can change is the timing,” said Safwan Shah, founder and chief executive of PayActiv, which added 410 employers as clients from March to August — more than double the additions a year earlier.

Big-money investors have been eager to cash in on the growth of an industry that caters largely to the financially vulnerable. Alternative lenders — a class of businesses that also include point-of-sale and small-business lenders — drew $2.5 billion in equity funding during the first half of 2020, according to CB Insights.

“This is venture capital money that is expected to be paid back royally,” said Lauren Saunders, associate director of the National Consumer Law Center. Although cheaper than payday lenders, cash-advance apps can be costly if used frequently, she said: A $100 advance taken out five days before payday with a $5 fee is equivalent to an annual percentage rate of 365 percent.

Some services have installed safeguards, including limits on the amount that can be advanced and ceilings on fees. Others let employers set the rules for their workers.

DailyPay will immediately transfer up to 100 percent of earned but unpaid income for a $2.99 fee, or $1.99 for next-day delivery. Its founder and chief executive, Jason Lee, said most users wanted to cover a specific need.

The similarity to traditional payday lending has prompted regulatory scrutiny. The New York Department of Financial Services and officials in 10 other states, along with Puerto Rico, are investigating the fledgling industry, focusing on whether the apps violate consumer-protection and payday-lending laws. The results could be significant: Payday lenders are barred in 15 states, including New York, New Jersey and Connecticut.

Wage-advance apps occupy a regulatory gray area. Unlike traditional and payday lenders, they don’t have any recourse against users — they don’t try to collect on unpaid debts or report them to credit bureaus.

And payday-lending laws typically apply to services that charge customers a fee to be eligible for a loan. Workplace-affiliated services do often charge fees, and say that’s permitted because they aren’t offering credit but instead access to an early payment directly from your employer. Public apps often take a different approach: optional “tips,” which are among the practices that state regulators are examining. 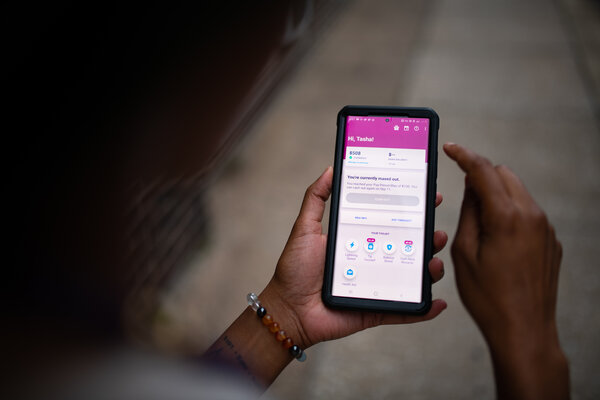 Both services used by Ms. Ayala-Spain, the American Airlines employee, accept tips. Dave, an online bank with automated budgeting tools, offers advances of up to $75, or $100 for its banking customers, with tips optional. Earnin also accepts tips — what its chief executive, Ram Palaniappan, called a “trust-based pricing model.”

“It’s a new product, and regulators want to understand it,” said Mr. Palaniappan, whose app is estimated to have been downloaded more than 10 million times and offers advances up to $500, depending on the user’s wages. “And I think they should as more and more consumers are using it.”

Ms. Ayala-Spain said that she tipped Earnin anywhere from nothing to $15 — and that when she skipped a tip, she noticed a difference in how she was treated. “It would decrease the amount I was able to take out,” she said.

Earnin said that it was “always evolving our practices to better service our customers” but that tipping behavior was not a factor in the amount users could cash out. The company also said it had reassessed its risk modeling because of the pandemic, leaving some customers with lower maximum advances.

Earnin’s business practices have prompted lawsuits from customers. One was resolved privately, and Earnin agreed to settle the class action in July by paying up to $12.5 million. That settlement awaits the approval of a judge.

According to settlement documents, Earnin caused more than a quarter of a million workers to incur the overdraft and other fees that it promised it would protect them from. One of the lead plaintiffs, Mary Perks, said that she had requested $100 and $50 from Earnin, and that when the company tried to collect what it was owed, her low bank balance triggered $70 in overdraft charges, according to the suit. With $14 in tips included, Ms. Perks ultimately spent $84 on a $150 advance, according to the complaint. Earnin declined to comment on the settlement.

But there are also plenty of satisfied customers. Wesley Clute, a musician and producer, had been working up to 40 hours a week as a manager at a Taco Bell near his home in Gulfport, Miss., until his hours were cut because of the coronavirus lockdowns. His finances were further pinched when he contracted the coronavirus during a weeklong vacation to visit his sister.

When he got back to work after three weeks away, he used Rain for an advance to buy diapers for his son, groceries and other essentials, though Mr. Clute said he was careful not to overuse the app.

“Three dollars is not bad compared to an A.T.M. fee, and it goes directly into your bank account,” Mr. Clute said. “I haven’t had to wait longer than 15 minutes after hitting the button.”

Related posts:
Hot News
U.S. can’t replace Trump in E. Jean Carroll’s slander lawsuit, judge rules
Suspected killer on the loose as discovery of two bodies sparks huge police hunt
A Mighty Ant
“Life and death.” 78-year-old Denver woman whose rental is up for sale fears move during pandemic – The Denver Post
Joe Biden desperately dodging key election question ‘haunting’ nominee’s campaign
Recent Posts
This website uses cookies to improve your user experience and to provide you with advertisements that are relevant to your interests. By continuing to browse the site you are agreeing to our use of cookies.Ok