WASHINGTON — President Biden’s two immediate predecessors had ambitious goals to rebuild the country’s infrastructure, but both left office having made little progress in fixing the nation’s bridges, roads, pipes and broadband. President Donald J. Trump announced so many meaningless infrastructure weeks that the term became a running joke of his administration.

As a candidate, Mr. Biden went further than either Mr. Trump or President Barack Obama by promising to pass a multitrillion-dollar package intended to create jobs and help the United States compete with China. And if anything, his first month in office, in which a power crisis in Texas left millions of people in need of water and electricity, has underscored the urgency of upgrading the nation’s aging structural underpinnings.

But while the goal of addressing the United States’ infrastructure is bipartisan, the details are not. That includes how much to spend, what programs count as “infrastructure” and, most important, whether to raise taxes to pay for it.

As a result, Mr. Biden could have an even tougher time gaining Republican support for an infrastructure bill than what he has faced in his first big legislative push, a $1.9 trillion economic aid package that passed the House on Saturday with every Republican voting no and that faces a similar fate in the Senate.

Unless the parties can agree on how to fund an infrastructure plan, Mr. Biden might have to try to push through another sprawling spending package with only Democratic votes. The task could prove exceptionally difficult given the competing pressures the president will face from centrists and progressives in his party — and the absence of a pandemic emergency to help fuse those factions in support of the bill.

“There’s a tendency to treat infrastructure as if it’s not political,” said Kevin DeGood, the director of infrastructure policy at the Center for American Progress, a liberal think tank. “But when we actually start talking about what we’re going to be building, there are specific people and companies that benefit and people and companies that don’t.”

Infrastructure, Mr. DeGood said, “is just another way of expressing the same political and philosophical differences” that have made bipartisan consensus so difficult to find in Washington in recent years.

Biden administration officials have not decided whether to push infrastructure as a stand-alone bill or as part of a broader package. But any hopes of bringing Democrats and Republicans together on a program are almost sure to be undermined by the same disagreements that have felled previous attempts.

Conservative lawmakers and powerful business groups in Washington are already making clear that no infrastructure program will draw bipartisan support unless it is slimmer than what many progressives are proposing and includes no tax increases on corporations or the rich.

Those demands could leave Mr. Biden no alternative but to mimic the approach for his stimulus package by trying to pass an infrastructure bill through reconciliation, a parliamentary process that would shield it from a Senate filibuster and allow it to pass with Democratic votes alone. Senator Bernie Sanders, independent of Vermont and the chairman of the Budget Committee, favors such an approach.

“This is the best opportunity we’ve had in my lifetime,” Pete Buttigieg, the transportation secretary, said in an interview. “We’ve come to a point as a country where it’s very clear these needs can’t keep being deferred. This crisis reflects that.”

Richard L. Trumka, the president of the A.F.L.-C.I.O., who joined other labor leaders in a meeting in February to discuss infrastructure with Mr. Biden, said the president was uniquely positioned to understand the importance of the issue from the perspective of working Americans. “He was born a blue-collar baby and he’s going to get buried a blue-collar baby,” Mr. Trumka said.

A big, bold infrastructure bill, he said, was “a racial justice bill, a Covid safety bill and the most important climate bill of all time, all in one.” 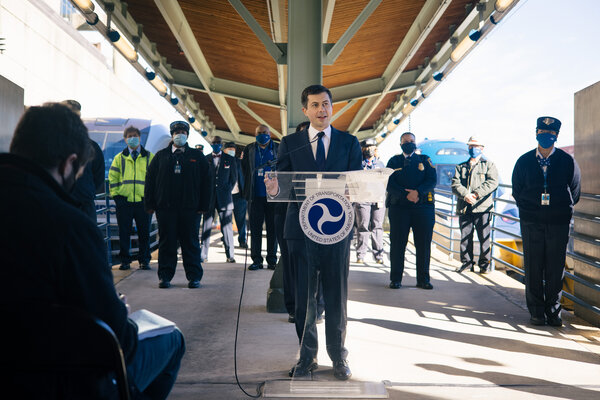 Economists broadly agree that government investments in infrastructure can help the economy run more efficiently, leading to stronger growth and faster wage gains for workers. That consensus has brought calls from a wide range of groups for lawmakers to pass a major infrastructure bill.

The American Society of Civil Engineers has given the country’s overall infrastructure a grade of D+, estimating that a funding gap of more than $2 trillion exists between needs and expected spending by all levels of government over the next decade. And the pandemic has put a spotlight on the poor quality of digital infrastructure in many parts of the United States, as more people are forced to work and attend school remotely.

Mr. Biden campaigned on a sprawling infrastructure agenda, with trillions of dollars invested in transportation, water and sewer lines, and the scaffoldings of an energy sector that significantly reduces the United States’ carbon emissions, funded by tax increases on multinational companies and high earners.

The components of the plan poll well — which was not enough for Mr. Biden’s predecessors.

Mr. Obama failed, in large part, for political reasons: Republicans did not want to give him another victory. His attempt at selling Congress on a $50 billion plan to rebuild 150,000 miles of road, to lay and maintain 4,000 miles of rail track and to restore 150 miles of airport runways suffered for following on the heels of his 2009 stimulus bill. Republicans dismissed it as “stimulus déjà vu.”

While Mr. Trump talked frequently about investing in infrastructure, he never seemed serious about tackling the issue and constantly allowed other matters to distract him. For instance, in August 2017, the Trump administration organized an event at Trump Tower in Manhattan that was intended to highlight how the administration was seeking to streamline permitting.

Instead, the news conference devolved into one of the grimmest and most defining moments of the Trump presidency: a fiery back-and-forth with reporters in which Mr. Trump defended white supremacists who had recently marched in Charlottesville, Va., arguing that there were “very fine people on both sides.”

When it came to selling a message about infrastructure, “we had some challenges in communication,” said D.J. Gribbin, an infrastructure specialist who was in charge of the event while working for the National Economic Council.

Lobbyists say that Mr. Biden starts with a better chance of success than either of his predecessors.

Business groups and many Republicans have expressed a willingness to work with the administration to pass $1 trillion or more in infrastructure spending. Areas of agreement with progressives include spending on highways, bridges, rural broadband networks, water and sewer lines and even some cornerstones of fighting climate change, like electric-car charging stations.

“A bipartisan package is going to be bigger in scope than many on the right would initially prefer. It’s also going to be narrower in scope than many on the left would prefer,” said Neil Bradley, an executive vice president and the chief policy officer at the U.S. Chamber of Commerce, which led 300 groups across the political spectrum in February in calling on Congress to pass an infrastructure bill by the Fourth of July. “You can really see in that a core that would attract broad bipartisan support.”

But progressives warn that such an approach could yield a bill that does not go far enough in addressing the deep-rooted problems in the economy that have exacerbated inequality, and that Mr. Biden has promised to tackle, by leaving out investments in America’s human infrastructure. Some argue a more effective bill would also fund child care and paid leave to help working parents and make educational investments to help students thrive and gain skills.

“I fear going small,” said William E. Spriggs, the chief economist at the A.F.L.-C.I.O., who has pushed the administration to spend aggressively to promote racial equity across the economy. “If you only do bridges and highways, they don’t generate the same number of residual jobs, and they don’t reach a broader set of workers and address fundamental inequalities.”

Other Democrats said a more cautious approach was right. “People who want infrastructure from the center-left should not sell it as renewables and climate change, even though it is helpful in those matters,” said Henry G. Cisneros, a secretary of housing and urban development under President Bill Clinton. “It’s not an argument that’s going to bring centrist business groups and conservatives on board. The most prominent argument is the economy needs not just a temporary boost. Our long-term economy needs modernization.”

Mr. Buttigieg, a former mayor of South Bend, Ind., said it was just a matter of selling progressive policies the right way. “I specialize in communicating ideas like this in places like where I grew up and spaces like Fox News,” he said. “There’s nothing about climate, rightly understood, that should be off-putting to people in rural or conservative areas. We just have to talk about it the right way.”

But Republicans and business groups have made clear to the administration that some of Mr. Biden’s preferred policies — taxes, in particular — could scuttle any chance of a consensus deal.

“I’m optimistic and hopeful that there will be a meaningful bipartisan agreement here because the needs are clear,” said Aric Newhouse, the senior vice president for policy and government relations at the National Association of Manufacturers. If Mr. Biden tries to pay for the plan by raising taxes on corporations and other businesses, Mr. Newhouse said, “that would obviously be a huge problem, and make this, instead of a bipartisan effort, a partisan effort.”

Mr. Bradley suggested a range of alternate mechanisms to finance an infrastructure push, including tax incentives for private corporations and an increase to the gasoline tax or other ways of taxing drivers. Mr. Newhouse suggested the package might not need to be paid for entirely, or at all, echoing the chairman of the Ways and Means Committee, Representative Richard E. Neal, Democrat of Massachusetts.

“Do you need a pay-for?” Mr. Newhouse said. “We make the argument: If you’re going to think about federal spending and the long-term return, investing in infrastructure is a no-brainer.”

Administration officials say it is too early to talk about the shape of any infrastructure package, at least until the $1.9 trillion stimulus bill is passed. “We’re 100 percent, all hands focused, on getting the rescue plan over the finish line,” said Brian Deese, the director of the National Economic Council. “We’ll remain in that posture until it’s done.”

But Mr. Biden has started holding high-profile meetings to build a possible bipartisan package, including one meeting in February with senators who lead the committees responsible for the core of infrastructure legislation on Capitol Hill. (Senator James M. Inhofe, Republican of Oklahoma, noted to reporters after the meeting that he and Mr. Biden had been “working on transportation since 1987.”)

“We have a lot of common ground,” Senator Shelley Moore Capito, Republican of West Virginia, said afterward. “Certainly, members like infrastructure because it’s job creating and every state benefits.”

“We need to put up a big victory for unity and working together,” she added.