We’re covering Indonesian Muslims’ concerns about the vaccine, a potentially pivotal election in the U.S. and the designers using nature and welcoming spaces to help patients with mental illness. 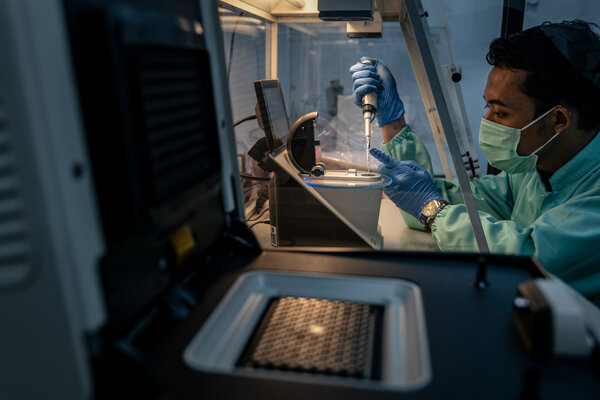 Indonesia’s Muslims have questions about the vaccine

With the highest number of coronavirus infections in Southeast Asia, Indonesia is eager to begin inoculations in the coming weeks. But one thing is standing in the way for its hundreds of millions of Muslims: Is the vaccine halal?

After waiting months for answers from Sinovac, the Chinese manufacturer whose shot will be distributed there, clerics received a one-sentence response that said: The vaccine was “manufactured free of porcine materials.” Religious leaders want more details, as even the smallest amount of pork DNA could dissuade some devout Muslims from taking it.

President Joko Widodo has dismissed concerns, saying the emergency virus situation was the bigger priority. It’s possible that a fatwa could be issued, as has been done in the past. Islamic authorities in other countries with large Muslim populations, like Malaysia and the U.A.E., have already ruled the vaccine to be permissible.

The goal: Indonesia hopes to inoculate 181.5 million adults within 15 months.

Around the world, vaccination drives are rolling out slower than promised, even as the count of new infections soars and record numbers flood hospitals.

A senior official in Singapore said on Monday that the country’s police force could legally use data from the government’s coronavirus contact-tracing program for criminal investigations.

Japan’s top-ranked sumo wrestler, Hakuho, has tested positive for the virus after losing his sense of smell, the country’s national broadcaster reported.

Voters are heading to the polls in Georgia for a runoff election that will decide which party has control of the Senate. On Wednesday, Congress will meet to certify President-elect Joe Biden’s victory as Republicans make a last-ditch bid to overturn the election results.

The elections in Georgia are shaping up as a nail-biter. In November, no candidate got 50 percent of the vote. Early voting data and polls show the race as very close once again.

If the Republicans retain control of the Senate, it will be much harder for Mr. Biden to accomplish his agenda. Republicans need to win only one of the two races to keep Senate control; Democrats need both to retake control. Here’s what to watch.

Next up: The vote in Congress to certify the results of the presidential election is a procedural step that Americans in most elections wouldn’t pay attention to. But it has taken on new meaning in a year in which the president has tried to derail the process.

Some Republicans are planning a final showdown to invalidate Mr. Biden’s victory, but they are all but certain to fail. Follow our latest updates here.

For the first time on record, the number of newborns in South Korea last year fell below the number of deaths, according to new census data. A shrinking and rapidly aging population could lead to a long-term crisis in one of the world’s most important economies.

The coronavirus pandemic may have contributed to the problem: Although the death toll was low, at around 1,000 people, the health crisis may have dissuaded people from having children or getting married. Successive governments have tried to offer couples financial incentives to have more children, to little avail.

If you have 5 minutes, this is worth it

Residents of the Taube Pavilion in California wake up in private rooms with views of the wooded Santa Cruz Mountains and can hang out in landscaped courtyards throughout the day. It may sound like a resort, but the center is a mental health facility that opened in June.

For decades, psychiatric hospitals were grim settings. But new research into the health effects of our surroundings is spurring the development of mental health facilities that feel residential, calming and supportive, with private rooms and more greenery.

Vietnam journalists: Three journalists were sentenced to prison terms of 11 and 15 years, including a prominent reporter who had written for foreign news organizations and advocated press freedom. As the ruling Communist Party’s congress draws nearer, the authorities have been arresting or prosecuting their loudest critics.

China death penalty: Lai Xiaomin, the former chairman of Huarong Asset Management, was sentenced to death on Tuesday, in a rare and dramatic example of Beijing’s use of capital punishment for economic crimes. He was convicted on charges of taking some $277 million in bribes.

Qatar blockade: Representatives of several Gulf states signed an agreement to ease Qatar’s isolation from its Arab neighbors, which have blockaded the country since 2017, when neighboring nations accused it of aligning too closely with Iran. The agreement came one day after Saudi Arabia agreed to reopen its borders and airspace to Qatar.

Snapshot: Above, a group in a rented igloo between curling games in New York City. Restaurants and cafes that are limited to offering outdoor dining are getting creative during a grim winter. Heated cabins, igloos and games like iceless curling have begun to crop up around the city.

What we’re reading: This Der Spiegel interview with the BioNTech founders Özlem Türeci and Uğur Şahin. It has reassuring information about the virus variant (yes, the vaccine will still be effective against it) and insights into the amazing lives of this “first couple of pharmaceuticals.”

Cook: This yam and plantain curry with crispy shallots is an adaptation of asaro, a dish of starchy root vegetables simmered in a seasoned tomato- and chile-based sauce that is served across the south of Nigeria and other parts of West Africa.

Read: “Himalaya: A Human History,” by Ed Douglas, a journalist and climber, unfolds the story of the world’s highest mountain range and its equally outsize impact on mankind.

Do: Pretend you’re in Cartagena. The Colombian city is so full of magic that it has inspired entire books by Gabriel García Márquez.

Whether it’s books or baking, we have you covered. At Home has ideas on what to read, cook, watch, and do while staying safe at home.

The corrections that haunt editors

David Vecsey, a Times copy editor, wrote about the gaffes and blunders that can keep him up at night. Here’s an excerpt.

It is a feeling that every copy editor knows. You bolt upright out of a deep sleep at 3 a.m., eyes wide open, and you say to yourself, Did I misspell “Kyrgyzstan” last night? And nine times out of 10, you can go back to sleep comfortably knowing … that you did.

Copy editors have an almost photographic memory when it comes to the words that pass before our eyes. Unfortunately, the cameras we use are those old-fashioned tripods that use flaming magnesium for a flash and take hours, or even days, for the pictures to develop.

But eventually it all comes back in a rush of clarity. You might be pushing your toddler through the park on a glorious sunny day off when suddenly you ask yourself: Did I say Dallas was the capital of Texas last week? Yes. Yes, you did. You idiot.

My job, simply speaking, is to get things right. So there is no worse feeling than the realization that you have entered a correctable error into print and that a correction will appear a day or two later to proclaim, “Because of an editing error …”

The Times has strict policies on corrections: If it’s wrong, even if just for a few minutes online or in one edition of the print newspaper, it is supposed to get a correction. It is this dedication to accuracy that earns the trust of our readers.

Reading through New York Times corrections is like taking a guided tour of journalism’s pitfalls. It’s where you discover the Ginsberg-Ginsburg Vortex, a black hole that has devoured many a journalist who has confused the names of the poet and the justice.

If there’s one thing I’ve learned, it’s that you have to shake off your mistakes and move on. And someday, by God, I will learn how to do that.

Thank you
To Theodore Kim and Jahaan Singh for the break from the news. You can reach the team at [email protected]ytimes.com.

P.S.
• We’re listening to “The Daily.” Our latest episode is part 2 of a series on the Senate runoff races in Georgia.
• Here’s our Mini Crossword, and a clue: Enthusiastic (five letters). You can find all our puzzles here.
• Katie Glueck, who was our lead reporter covering the Biden campaign, is joining the Metro desk as chief political correspondent.