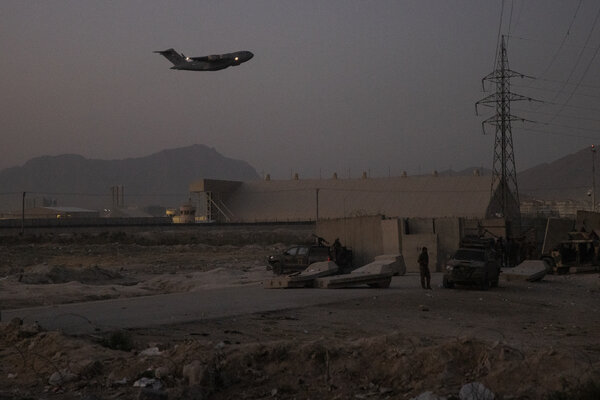 President Biden told world leaders during a virtual meeting that he was still planning for U.S. troops to leave Afghanistan by Aug. 31, though an extended mission was a possibility, according to an official.

The U.S. will begin withdrawing its 6,000 troops in Kabul as soon as this week or this weekend in order to meet the deadline. The longer the troops wait, Biden said during the closed-door meeting, the greater the risk of a terrorist attack, which he described as “very high.”

The pace of evacuations has accelerated greatly despite the chaos and desperation outside the Kabul airport. But the Taliban announced that they would block Afghans from traveling to the airport. Kabul residents said they were struggling to make ends meet in an economy that, propped up for the past generation by American aid, is now suddenly in free fall.

Secret talks: The C.I.A. director, William Burns, traveled to Kabul this week to meet with the Taliban leader Abdul Ghani Baradar as the U.S. sought more time for the evacuation operation. The Taliban have rejected any plans to extend the deadline for U.S. troops.

Targets: As reports suggest the Taliban are tracking those who worked with Western countries, Nepal is trying to get thousands of its people out, including former soldiers who have long served as private security guards.

In an interview with The Times before a visit to Washington, Naftali Bennett, Israel’s prime minister, said he opposed any U.S.-led attempts to reinstate the nuclear deal with Iran and would continue Israel’s covert attacks on Iran’s nuclear program.

The Israeli leader also ruled out peace talks with the Palestinians and said he would expand West Bank settlements.

Bennett’s positions differ little from those of his predecessor, Benjamin Netanyahu. But as he prepared to meet with President Biden at the White House on Thursday, Bennett said he would seek common ground with the administration.

Quotable: “This government will neither annex nor form a Palestinian state, everyone gets that,” he said. “I’m prime minister of all Israelis, and what I’m doing now is finding the middle ground — how we can focus on what we agree upon.”

Related: In a recent shift, the Israeli government has begun allowing an increasing number of Jews to pray at the Temple Mount, a site sacred to both Jews and Muslims that has been used exclusively for Muslim prayer since 1967.

Indonesia has started to ease restrictions in its capital, Jakarta, just a month after experiencing one of the world’s worst coronavirus outbreaks.

Restaurants, malls and places of worship in some areas of the country were allowed to open their doors to a reduced number of people on Tuesday after the government’s tallies of infections dropped by 78 percent from their peak in mid-July. However, just 12 percent of the population is fully vaccinated, an average of more than 1,000 people in the country die each day from the virus and the W.H.O. warned that the data may be inaccurate because of a decrease in testing.

“Urgent action is needed to address the continuing surge of cases,” the global health agency said last week, emphasizing the continued outbreaks in parts of the country.

The largest public hospital in the Philippines temporarily shut down its emergency room because it was overwhelmed by a stream of coronavirus patients.

The U.S. advised that people avoid traveling to Haiti, Kosovo, Lebanon, Morocco, the Bahamas and St. Martin, which have all seen surges in Covid-19 cases.

U.S. consulates approved about 117,000 international student visas in May and June, about 90 percent of the prepandemic level.

Apple and Google are fighting a bill in the South Korean legislature which aims to put limits on app store requirements.

The 16th Summer Paralympics held its opening ceremony in Tokyo, with the Refugee Paralympic Team leading the parade.

Hissène Habré, the former president of Chad, died while serving a life sentence in Senegal for crimes against humanity.

President Biden’s promises to crack down on state corruption in Central America have taken a back seat to cooperation with those governments to slow border migration.

Kathy Hochul was sworn in as the first woman to serve as New York’s governor after a series of sexual harassment allegations made against the outgoing governor, Andrew Cuomo.

As a 20-year-old American soldier fighting in World War II, Martin Adler took a photograph with three Italian children who he had nearly fired upon after seeing movement and assuming they were German soldiers. Now 97, Adler reunited with the siblings for the first time in an emotional meeting organized by his daughter.

Lives Lived: Charlie Watts, one of the finest rock drummers of his generation, who performed for the Rolling Stones for more than 50 years and never had a taste for the life of a pop idol, died on Tuesday. He was 80.

Spike Lee’s new documentary series on HBO — “New York Epicenters: 9/11-2021½” — is a mournful and irreverent tribute to his city. It chronicles the Sept. 11 attacks and the pandemic through interviews with dozens of New Yorkers. “With 20 years coming up since 9/11, and with people often saying of New York during Covid, ‘This is the epicenter,’ it was natural,” Lee said of the subject matter.

Some of the faces are familiar — Senator Chuck Schumer, Mayor Bill de Blasio, Rosie Perez — but most of the story is told through health care workers, firefighters, activists and survivors. His team interviewed over 200 people for the series. “We just wanted to be as well-rounded as possible, a kaleidoscope of witnesses,” he said.

In a Q. and A. with The Times, Lee also defended his decision to include Sept. 11 conspiracy theorists in the film: Viewers would “make up their own mind,” he said. “My approach is put the information in the movie and let people decide for themselves.”

Make cheese the main course with this vegetarian halloumi dish.

If you follow these simple rules, hanging art on your walls can be easy.

You can find all of our puzzles here.

That’s it for today’s briefing. See you next time. — Matthew

P.S. Zeynep Tufekci, a sociologist and writer, is joining our Opinion team as a columnist.

The latest episode of “The Daily” is about Mexico’s suit against U.S. gun manufacturers.

Sanam Yar wrote the Arts and Ideas. You can reach Matthew and the team at [email protected].