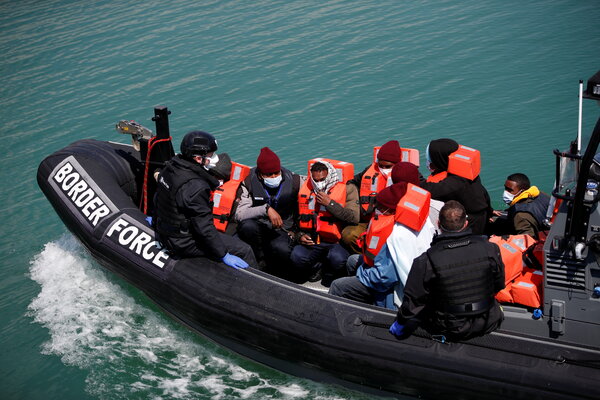 The British government yesterday introduced a plan that would allow it to transfer asylum seekers out of the country while their applications are being processed and to criminalize entering the country illegally. Human rights groups say the policies would violate international laws.

The bill places refugees in two distinct groups based on their mode of arrival in Britain — either through resettlement or via irregular means, such as a boat or truck, which would be treated as a criminal matter and result in an arrest.

Bridget Chapman, a spokeswoman for the Kent Refugee Action Network, said that Britain had “a shared responsibility” to accept people who were applying for asylum. “We can’t outsource that to poorer countries, that’s an abdication of responsibility,” she added.

Context: The plan would place Britain in the company of Denmark, which recently passed a law allowing for the offshore detention of refugees, and Australia, which has already put in place similar measures.

A push to reach unvaccinated Americans

With only 58 percents of American adults fully vaccinated against Covid-19 and the pace of vaccination relatively flat, President Biden called for employers to set up clinics at work and to offer paid time off for workers to receive their shots.

Even with nearly half the total population expected to be fully vaccinated by the end of the week, new outbreaks in areas with lower vaccination rates are still possible, Biden said — especially with the worrisome Delta variant spreading. In some parts of Texas, Arkansas and Missouri, there has already been a sharp rise in cases.

Having already increased efforts to get vaccines to primary care doctors, pediatricians and mobile clinics, it is unclear what else the administration can do. The last stretch of any vaccination campaign is the most arduous, public health officials said.

Quotable: “Please get vaccinated now — it works, it’s free, it’s never been easier,” the president said. “It’s never been more important. Do it now for yourself and the people you care about — for your neighborhood, for your country. It sounds corny, but it’s a patriotic thing to do.”

Israel and South Korea have agreed to swap hundreds of thousands of doses of the Pfizer-BioNTech vaccine. Israel is sending much-needed expiring doses to Korea, and South Korea will send back the same number in September and October.

As India emerges from a traumatic spring, the Taj Mahal is open again. But worries that another wave of infections may be looming have cast a pall over lives that feel stuck in limbo.

The virus is surging in U.S. immigration detention centers.

The Taliban aim to burnish their image

The Taliban are trying to rebrand themselves as capable governors while they press a ruthless, land-grabbing offensive across the country. It is a stark signal that the insurgents fully intend to try for all-out dominance of Afghanistan once the American military pullout is finished.

“The situation is such that it is a testing period for us,” Sirajuddin Haqqani, the Taliban deputy commander, said in a recent radio broadcast to Taliban fighters. “Everything done in practice is being watched. Behave in a good way with the general public.”

For much of the Afghan public, terrified and exhausted, the Taliban’s gains have been panic-inducing. And there is widespread fear that worse is in store, as the Taliban already have several crucial provincial capitals effectively under siege.

Details: The Taliban’s reform appears largely superficial. No real progress has been made in peace talks with the Afghan government while an assassination campaign against government workers, civil society leaders and security forces continues. Women are being forced out of education and public-facing employment.

News From the U.S.

The death toll in last month’s Florida building collapse remains unclear — likely between 100 and 150 people — because authorities are still unsure how many residents were there at the time. Above, friends and relatives with the coffin of a victim. Dozens of people are still missing.

Eric Adams won the Democratic primary for mayor of New York City, according to The Associated Press.

Weeks after a U.S.-Russian summit, Russian hackers are accused of breaching a contractor for the Republican National Committee last week, around the same time that Russian cybercriminals carried out the single largest global ransomware attack on record.

Oil prices have spiked after the OPEC Plus countries failed to break their deadlock on production increases. Above, Saudi Arabia, the de facto leader of OPEC Plus.

A regional passenger plane with 28 people aboard crashed in far eastern Russia on Tuesday, the authorities said. There were not believed to be any survivors.

The Israeli parliament on Tuesday voted against extending a law that effectively bans citizenship or permanent residency for Palestinians from the occupied territories who marry Israelis.

After winning their matches, Ashleigh Barty and Angelique Kerber will face off in the Wimbledon semifinals on Thursday.

The Dutch crime reporter Peter de Vries, famous for solving cold cases and hosting his own televised crime show, was shot in the head and fighting for his life Tuesday night.

Thirteen people are in court in France on charges of online harassment, after an anti-Islam online rant from a French teenager drew death threats.

After 55 years of disappointment, English soccer fans are daring to hope this might be their year for a major championship.

“The authorities who are supposed to protect us from predators — turns out, they’re the ones assaulting us.”

The Times spoke to Egyptian women who were either arrested after speaking out or had gone to the authorities to report a crime. In each case, they said, they were sexually abused by officials. In interviews, they said they felt they had no path for justice, fearing arrest and expressing worry about stigmatizing their families.

A generation of spelling bee champs

Every year, about 11 million children in the U.S. participate in school-level spelling bees. The most ambitious middle and elementary schoolers set their sights on the Scripps National Spelling Bee, which takes place this week.

There’s a well-documented pattern among recent winners, as Anna Kambhampaty writes in The Times. Since 2008, a South Asian American child has been crowned a champion every year at the competition. This year, at least nine of the 11 finalists are of South Asian descent.

The trend can be traced back to 1985, when Balu Natarajan became the first child of immigrants to win Scripps. That win prompted an outpouring of support from people of South Asian descent. “We really had no idea that we were doing this for a community,” Natarajan said. “We were just this tiny fraction of the participants.”

Now, there are spelling bees tailored to South Asian children and coaching companies founded by South Asian Americans. Indian grocery stores often feature fliers for local spelling bees. “The community created an infrastructure for the kids to really thrive and excel in this area,” Shalini Shankar, an anthropologist, said.

For more, read the full story.

Serve this simple weeknight chicken recipe alongside crusty bread or rice to soak up the juices.

Move (At Least A Little)

The push to take 10,000 steps a day is more a marketing accident than based on science. Taking far fewer may also have notable benefits.

See an annual pilgrimage to gather peyote in the Mexican desert.

That’s it for today’s briefing. And a correction: The Euros semifinal match between England and Denmark is today, not tomorrow.

See you next time. — Natasha

P.S. Nikole Hannah-Jones, the Times journalist behind the 1619 Project, is joining the Howard University faculty in the newly created Knight Chair in Race and Journalism position.

The latest episode of “The Daily” is about the rise of the Delta variant.

Sanam Yar wrote today’s Arts and Ideas. You can reach Natasha and the team at [email protected].