We’re covering a spending boom among China’s wealthy, revelations from President Trump’s tax records and how women are losing gains in the workplace during the pandemic. 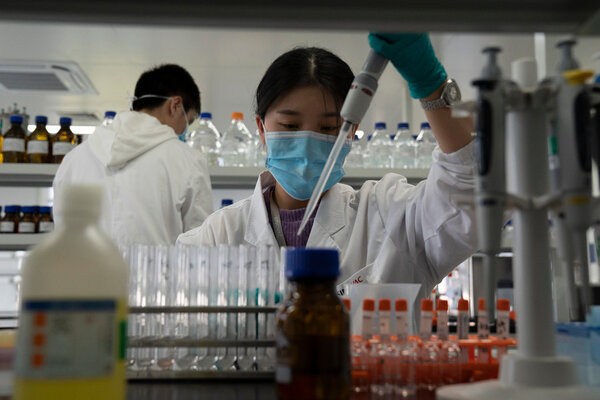 Chinese officials have begun to inoculate thousands of people with unproven coronavirus vaccines. Global health experts are bewildered: No other country has injected people outside the usual drug trial process to such a huge scale.

The government is giving shots to essential workers and vaccine company staff, among others. The next wave will be for teachers, supermarket employees and people traveling to risky areas abroad. The vaccines are in Phase 3 trials, which are mostly being conducted outside China on people who are closely monitored.

Chinese vaccine makers and state-owned companies have asked people taking vaccines to sign nondisclosure agreements that prevent them from talking to journalists. A senior Chinese official said this month that a vaccine could be made available to the public as early as November.

Quotable: “My worry for the employees of the companies is it may be difficult for them to refuse,” said one pediatrician in Melbourne, Australia, who has been involved in the oversight of vaccine trials.

The strict stay-at-home order issued by Myanmar last week for its largest city, Yangon, barred residents from traveling between townships. Many professions have exceptions, but journalists do not — raising concerns about access to information ahead of a Nov. 8 election in the country.

Growing numbers of Europeans are buying into conspiracy theories about the coronavirus, or downplaying its risks. Protesters have taken to the streets in London, Berlin, Brussels, Dublin and Paris to rally against restrictions.

Many survivors of Covid-19 are suffering from serious, debilitating and mysterious effects, many months after first becoming ill.

After a long lull, the first major auto show since the coronavirus spread around the world opened this weekend in Beijing. The big crowds there were another sign of China’s recovery.

The Chinese economy shrank in the first quarter, but it has now resumed its surge. China’s wealthy are spending. Restaurants, hotels and airports are crowded again. The recovery in spending has begun spreading to middle-class families, but many low-income workers are still struggling.

“The richest regions are outperforming across the board,” particularly export regions along the coast, while the rest of the country lags, said Derek Scissors, the chief economist of the China Beige Book analysis group.

The data: Chinese officials are expected to report next month that growth accelerated during the July-to-September quarter, even while the rest of the world limps along.

Related: Japan is rethinking its reliance on trade with China, and it is working on ties with Australia and India.

A Times investigation into President Trump’s tax records showed that he paid no income taxes in 11 recent years and a total of $750 the year he won the presidency, in 2016, and the same amount in 2017, during his first year in office.

Many of his businesses reported losses — which reduced his taxable income. Mr. Trump also claimed deductions on what most people would consider personal expenses, such as $70,000 spent on his hair.

Response: Mr. Trump dismissed the reporting as “totally fake news” and insisted that he paid “many millions of dollars” in taxes. He will inevitably face questions on his tax avoidance when he debates former Vice President Joe Biden today. The $750 figure may stick in the minds of many U.S. voters who earn far less than a president, and who pay far more in federal taxes.

Compare: Former presidents Barack Obama and George W. Bush each regularly paid more than $100,000 a year — and sometimes much more — in federal income taxes while in office.

Details: The Times obtained tax information extending over more than two decades, revealing struggling properties, vast write-offs, an audit battle and hundreds of millions in debt coming due. Here are our takeaways and a timeline of Mr. Trump’s finances.

If you have 6 minutes, this is worth it

The pandemic sets women ‘10 years back’

Around the world, working women, if they haven’t already been laid off, are facing brutally hard choices about whether to stay home. Workplaces already tend to penalize women who need more flexibility, and that, too, is exacerbated in the coronavirus pandemic. Above, Miriam Flores offers a free daycare service for single mothers in Lima, Peru.

Sveta Skibinsky Raskin, a mother of five who lives in Jerusalem, worked as a writer while her children were in school and day care. But when the schools closed, she had to stop. “I tried for a week and I just couldn’t do it,” she said. The loss of school and day care “is going to take our women 10 years back,” said the head of one charity service.

Pakistan politics: Asif Ali Zardari, the former president and widower of former Prime Minister Benazir Bhutto, was indicted on Monday in a money laundering case. His supporters say the charge is meant to pressure the opposition to Prime Minister Imran Khan.

Thailand: An American man was arrested in Thailand after posting negative reviews of a resort. He was charged under the country’s criminal defamation law, which has been used to silence critics. Even the hotel acknowledged that using the law might be excessive.

Uber in London: A judge ruled that the ride-hailing service could continue operating in the city after a battle with transportation regulators who had threatened to ban its cars over safety concerns. Uber has up to 45,000 drivers in London.

Snapshot: Above, Katayga, a village in Siberia. Once a vast prison ground for political exiles, the banks of the Ket River are now home to a range of remote and isolated communities.

What we’re reading: This Radio New Zealand report by a journalist who took to court a man who filmed her while undressing in a Kmart changing room. Natasha Frost, who writes the Europe briefing, calls it a “spellbinding story” and a “brave, thoughtful look at victim blaming.”

Cook: This Sri Lankan dal with coconut and lime kale begins by quick-cooking red lentils and deepening their flavor with fried green chiles, garlic and ginger.

Read: In “The Meaning of Mariah Carey,” the singer and songwriter opens up about abuse, infidelity, racism and much more.

Watch: The short “Father of the Bride Part 3 (ish)” on YouTube is a sort-of sequel born amid worry about the pandemic. Nancy Meyers, the director, wrote: “This one, with its positive themes and love of family, made me feel whole at a time when I needed it most.”

It’s always nice to get a good tip on what to read, cook, watch and do while staying safe indoors. At Home has our full collection of ideas.

Amazon wasn’t having much luck in Italy until the pandemic, when Italians turned to online shopping. Adam Satariano, who covers European technology, talked to our On Tech newsletter about how the tide turned in Italy and whether other parts of the world will follow suit.

Why wasn’t Amazon as popular in Italy before as it is now?

Adam: Italy has the oldest population in Europe, and people tend to prefer shopping in stores and paying in cash.

The pandemic changed habits. One survey found that two million Italians tried e-commerce for the first time from January to May. Amazon was ready for this moment.

How did Amazon get ready?

The company was patient. Since it started in Italy in 2010, it slowly built warehouses and a distribution network, and it convinced merchants to sell their products online. For local appeal, Amazon sponsors events like a Christmas festival in remote villages to show that the company can reach everywhere. Amazon also let Italians earmark a percentage of their purchases for local schools.

A significant majority of Amazon’s sales are in four countries: the United States, Germany, Britain and Japan. Is this when Amazon becomes a true global store?

Maybe. India has been a mixed bag for Amazon. Brazil has been challenging, although it looks like the pandemic increased sales there. Amazon is targeting Europe for a lot of growth. There are two ways to look at it: Either Amazon has plenty of room to grow globally, or it’s going to be tough to make it in many parts of the world.

Thank you
To Theodore Kim and Jahaan Singh for the break from the news. You can reach the team at [email protected]

P.S.
• We’re listening to “The Daily.” Our latest episode is about Amy Coney Barrett, the judge nominated to the U.S. Supreme Court.
• Here’s our Mini Crossword, and a clue: What a convertible sofa converts into (three letters). You can find all our puzzles here.
• Nestor Ramos, a Pulitzer Prize finalist at The Boston Globe, is coming to The Times’s Metro desk as an assistant editor.

Related posts:
Hot News
United States-based Kiwi suing Air New Zealand over flight cancellation
Lottery Corp. witness denies deal with B.C. casino to underreport suspicious transactions
Australia's AMP receives takeover offer from Ares Management
Spain’s Sanchez warned against torpedoing Brexit deal with Gibraltar sovereignty claims
Nice attack points to continued Tunisian struggle with jihadists
Recent Posts
This website uses cookies to improve your user experience and to provide you with advertisements that are relevant to your interests. By continuing to browse the site you are agreeing to our use of cookies.Ok