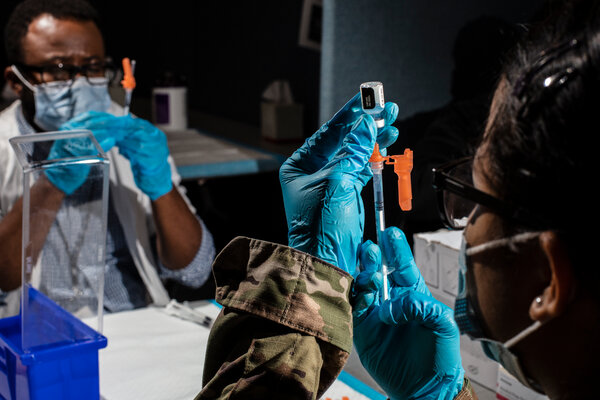 Vaccines point the way out of the pandemic

The mRNA vaccines made by Pfizer-BioNTech and Moderna set off a persistent immune reaction that may protect against the coronavirus for years, if not a lifetime, without the need for a booster shot, scientists reported yesterday.

“It’s a good sign for how durable our immunity is from this vaccine,” said Ali Ellebedy, an immunologist at Washington University in St. Louis who led the study. It did not consider the Johnson & Johnson shot, which is made with a different technology.

Caveats: The protection is most reliable if the virus and its variants do not evolve much beyond their current forms — which is by no means guaranteed. And older adults and people with immunodeficiencies may still need boosters.

A cascading series of failures — including officials’ lack of preparation for a second wave they knew was probably coming — left hospitals across India without medical oxygen.

World Health Organization officials have said that even fully vaccinated people should still wear masks, advice that diverges from many national health authorities.

Hong Kong will suspend all passenger flights from Britain beginning Thursday because of concerns about the Delta variant.

A federal judge threw out antitrust lawsuits brought against Facebook by the Federal Trade Commission and more than 40 states, on the grounds that too much time had elapsed since Facebook’s purchase of Instagram and WhatsApp, which states said cemented its monopoly over social networking.

In a major blow to attempts to rein in Big Tech, the judge also said the F.T.C. complaint failed to provide enough facts to back its claim. The agency has 30 days to refile its complaint. The ruling sent Facebook’s stock soaring, and its market capitalization exceeded $1 trillion for the first time.

Facebook’s new strategy: The company has been helping to find ways to lower the costs to bring the world online, including connecting with government agencies, internet equipment sellers and cellphone service providers.

Other tech news: Many people who work with Black content creators hope that a viral “strike” campaign on TikTok can open a conversation about equity and payment.

The Ethiopian military has occupied the Tigray region since November. The Tigrayan forces, known as the Tigray Defense Forces, spent months regrouping and recruiting new fighters. In the past week, they began a rolling counterattack back toward the capital, in a significant setback for Prime Minister Abiy Ahmed.

Scenes on the ground: Journalists for The Times in Mekelle saw thousands of residents take to the streets last night, waving flags and shooting off fireworks after hearing that Tigrayan forces had advanced to the city.

A rescue operation at a collapsed building near Miami entered its fifth day, with the likelihood of finding survivors fading. Officials said two more bodies had been recovered, bringing the known death toll to 11.

The Catholic Church in Poland said it had received 368 reports regarding the sexual abuse of minors, including 144 that preliminary investigations deemed “verified and reliable.”

The Iraqi government condemned U.S. airstrikes on Iranian-backed militias near the border between Iraq and Syria.

A vast heat wave is setting temperature records in western Canada and the northwestern U.S., led by Salem, Ore., where the temperature reached 117 degrees Fahrenheit. Portland, Ore., hit 115 degrees; the average high temperature there is 73.

President Biden’s ability to pass his climate agenda depends a great deal on Senator Joe Manchin III of West Virginia, the most conservative Democratic senator — who represents a state reliant on the coal industry.

Drought is transforming California’s agricultural industry. One farmer says it’s now more lucrative for him to resell water than to grow crops.

Today is the deadline for Caster Semenya, third from left, to gain a qualifying time in the women’s 5,000 meters for this summer’s Olympic Games. The runner has refused to suppress her testosterone levels, which is required of intersex athletes to compete in many women’s track events.

Novak Djokovic won his first-round match yesterday at Wimbledon. The pandemic forced the tournament’s cancellation in 2020 and has led to some changes this year, but much of its tradition is back.

The French authorities said they were looking for an unidentified woman who held a banner along the Tour de France route on Saturday, leading to a collision that sent dozens of cyclists tumbling to the ground.

James Lawrence completed 100 Ironman-distance events in 100 days. He brought a whole community — and a nonprofit that has come under scrutiny — along with him.

For migrants in Mexico, life is often in flux. Our journalists asked people to take their own pictures as they waited to cross the border into the U.S.

Peering beneath the veneer of Vermeers

Art experts at the National Gallery of Art in Washington hope to settle whether two paintings credited to Johannes Vermeer are indeed the work of the 17th-century Dutch artist. Though neither is an obvious fake, they are smaller than his other works and painted on wooden panels instead of canvas.

Art experts are increasingly taking advantage of high-tech scanning techniques, including one that is also used to study Mars, writes our science reporter Kenneth Chang.

Reflectance imaging spectroscopy takes advantage of the fact that different molecules absorb light at different wavelengths. Commonly used by geologists to identify different rocks, it can also be used to pick out different pigments — themselves crushed minerals — and show how painters work.

In the case of the Vermeer paintings, infrared and X-ray imagery shows rougher brush strokes in the lower layers, where he lays out the composition. For now, there are no conclusions on the two works being analyzed, said Marjorie Wieseman, the head of the National Gallery’s department of northern European paintings.

“There are some anomalies in the paintings in terms of how they relate to other works by Vermeer,” she said. “How many can you plausibly account for, and how many remain curiosities and just something from left field?”

With a buttery cookie crust and a tangy, almond-topped jam filling, this crostata is simple, homey and utterly delightful.

Here are the shows impassioned readers told us we’d missed in our list of the best American comedies of the 21st century.

Quentin Tarantino turned his most recent film, “Once Upon a Time … in Hollywood,” into a pulpy page-turner.

Here’s today’s Mini Crossword, and a clue: Most popular dog breed in the U.S. (three letters).

That’s it for today’s briefing. See you tomorrow. — Natasha

The latest episode of “The Daily” is about what the Japanese public thinks of the Olympics.

You can reach Natasha and the team at [email protected].