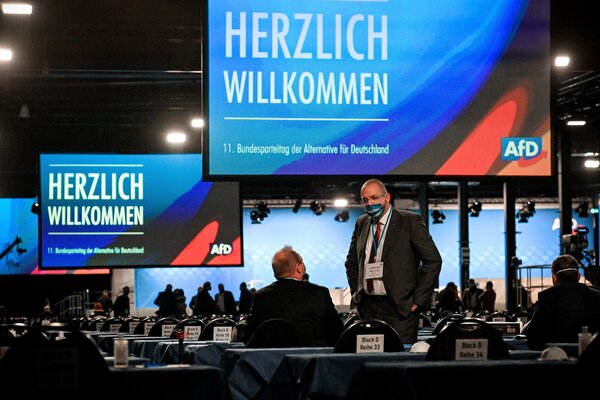 A German far-right party under surveillance

Germany’s domestic intelligence agency has placed the far-right Alternative for Germany party under observation as a potential threat to the country’s democracy, officials said on Wednesday. It is the first time such an action has been taken against the main opposition party in the country’s postwar history.

The leaders of the AfD, as the party is known, routinely accuse Muslim immigrants of being criminals, attack the press and question democratic principles. During the coronavirus pandemic, AfD officials have taken part in protests that have at times turned violent.

The party won 13 percent of the vote in 2017, though its support has since shrunk to around 10 percent. In Germany’s formerly Communist east, it still scores twice that.

Legal challenge: The surveillance decision was reached last week but was not announced, pending a court case the AfD has brought to stop the measures against it. Members of the party accused the federal government of making a politically motivated move ahead of a national election.

Context: The move coincides with France’s ban of Generation Identity, a militant youth movement considered dangerous for its slick rebranding of neo-Nazi concepts. Separately, lawmakers in the European Parliament in Brussels forced the party of Hungary’s semi-authoritarian leader, Viktor Orban, out of the mainstream conservative faction.

Covid crisis in Brazil is a warning, scientists say

Brazil has already experienced one of the world’s worst outbreaks of Covid-19, which has left a trail of death and despair there. The country is now battling a more contagious variant that may cause reinfection. On Tuesday, more than 1,700 Covid-19 deaths were recorded, Brazil’s highest single-day toll.

Studies suggest that a variant that swept through the city of Manaus can infect some people who have recovered from other versions of the virus. That variant has been found in about two dozen other countries, including the U.S.

Analysis: “You need vaccines to get in the way of these things,” one epidemiologist said of the variants. “The immunity you get with your cemeteries running out of room, even that will not be enough to protect you.”

Amid a debate about Israel’s duty to supply vaccines to Palestinians living under occupation, Palestinian leaders face criticism for siphoning off some of the few doses already delivered to the occupied West Bank.

German leaders are considering extending the country’s 11-week lockdown, set to expire in days. Regional leaders have called for loosening restrictions, but scientists are worried about the variants.

Bharat Biotech of India said on Wednesday that its vaccine, Covaxin, had shown 81 percent efficacy in interim trials.

Romania’s health care system is struggling, with many people who were suffering from non-Covid problems forced to go without treatment over the past year. That includes cancer patients and those with H.I.V.

The Tokyo Olympics will decide by the end of March if it will allow international spectators to attend the Games this summer in Japan.

At least 38 people were killed in Myanmar yesterday, the biggest one-day toll from the authorities’ worsening repression of anti-coup protests, Christine Schraner Burgener, the United Nations special representative for the country, said.

Myanmar has been in turmoil since the military seized full control on Feb. 1 and arrested the civilian leaders whose party, the National League for Democracy, had won an overwhelming victory in national elections. Security forces have used increasingly brutal means to crush the ensuing protests, as a Times analysis of visual evidence shows.

Ms. Burgener said that junta leaders had rejected her requests to visit the country and deflected her warnings about the consequences of becoming a global pariah. Citizens inside the country had pleaded for international action, she said, adding, “Today was the bloodiest day since the coup happened.”

If you have 7 minutes, this is worth it

After contracting the coronavirus in December, the Times food writer Tejal Rao was left depressed and disoriented when her sense of smell disappeared. “All of the foods I loved became unrecognizable, turning into a series of unappealing textures,” she writes.

To help recover what she had lost, Tejal turned to smell training, the tedious process of sitting down and sniffing particular scents. She likens the process to “picking up a fragment of a familiar song from a passing car, hooking onto the short sequence of notes you recognized, and having the name of it just on the tip of your tongue.”

China’s rise: The country’s leader, Xi Jinping, will unveil a blueprint for steering it through a post-pandemic world when the Communist Party-controlled legislature, the National People’s Congress, meets on Friday.

War crimes investigation: The International Criminal Court said it was opening an investigation into allegations of war crimes in the Israeli-occupied territories since 2014. Israel’s actions in that year’s Gaza war and rocket fire by Palestinian militants are likely to come under scrutiny.

Iraq rocket attack: A barrage of rockets was fired at an Iraqi base in Anbar Province, one of the last bases where U.S. forces are stationed. The assault came just under a week after the U.S. attacked Iran-backed militia targets at the Syria-Iraq border.

Toronto van attack: A man was convicted of murder and attempted murder for killing 10 people and injuring 16 when he drove a van onto a busy sidewalk in the Canadian city in 2018. The event still haunts the city.

British recovery: The government in Britain has announced billions of pounds in additional spending to see workers and businesses through the summer and the coronavirus vaccine rollout — as well as a plan to raise taxes when the pandemic is expected to be over.

Snapshot: Above, a bobcat caught on camera at a reserve in Massachusetts. Though wildlife cameras are essential scientific tools, they may also be able to answer simpler questions in your own garden, like: Who’s tunneling under the porch? And what’s going on at the bird feeder when you’re not looking?

Lives lived: The Japanese artist Toko Shinoda, whose fluid, elegant work took influence from the ancient serenity of calligraphy and the art of Jackson Pollock and Mark Rothko, has died at 107.

What we’re reading: This ode to the reality television show “RuPaul’s Drag Race UK,” and its gloom-busting properties, from Vogue. “I’m not one for hyperbole, but nothing has lit up my life like this show,” writes Raven Smith.

Cook: These terrific cod cakes can be made with any white-fleshed fish.

Plant: Thinking of adding some greenery to your home? Here’s a guide to picking the right houseplants (and keeping them alive).

Listen: We asked Rufus Wainwright, Josh Groban and Andrea Bocelli, among others, to take five minutes to help you fall in love with tenors.

Look after yourself. At Home has our full collection of ideas on what to read, cook, watch and do while staying safe at home.

A 37-year-old song has helped drive a comeback for a genre of music from Japan called city pop.

A YouTube video of the track, “Plastic Love” by Mariya Takeuchi, has garnered more than 56 million views since 2017. For many young fans, it served as an entry point to city pop, as Cat Zhang explains in Pitchfork. The genre is from the ’70s and ’80s and was influenced by R&B and jazz. It often pairs shimmery vocals with funky production, and the result is an effervescent sound.

The YouTube algorithm is partly behind the genre’s online resurgence. Calming, atmospheric music — which can be played in the background on repeat while users work — is popular on the platform. Many of those listeners end up discovering city pop in their video recommendations. As Rolling Stone reported, a Reddit user trying to identify the source of the genre’s sudden popularity wrote, “citypop is also known as youtuberecommendationcore.”

The songs also reach new audiences through TikTok. One trend on the platform, Zhang writes, had users of Japanese descent playing a 1979 city pop song for their mothers, who beamed and sang along in response.

That’s it for this briefing. See you tomorrow.

Thank you
Theodore Kim and Jahaan Singh provided the break from the news, and Sanam Yar wrote today’s Back Story. You can reach the team at [email protected]

P.S.
• We’re listening to “The Daily.” Our latest episode is on Bill Gates’s efforts to ensure the Covid-19 vaccine reaches poorer countries.
• Here’s our Mini Crossword, and a clue: Creative in a somewhat pretentious way (five letters). You can find all our puzzles here.
• Lisa Lerer has been promoted to national political correspondent after a two-and-a-half-year run as lead writer and host of the On Politics newsletter.