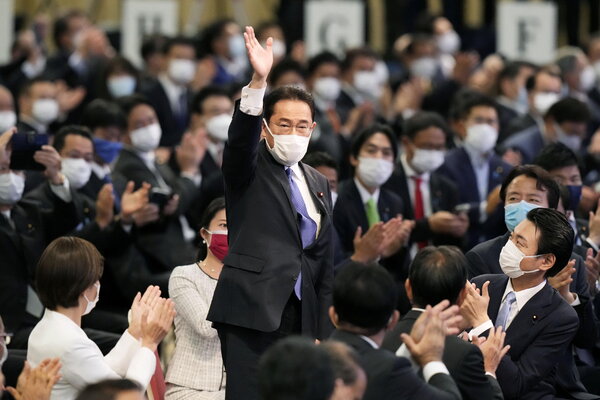 Japan’s governing party elected Fumio Kishida, a former foreign minister and the candidate least likely to stray from the mainstream platform, as its choice for the next prime minister.

A moderate party stalwart, Kishida, 64, lagged in public opinion polls but had the backing of conservatives in the governing Liberal Democratic Party. He offered little to distinguish himself from the unpopular departing leader, Yoshihide Suga.

Kishida defeated his popular rival, Taro Kono, the outspoken U.S.-educated vaccine minister, 257 to 170, in a runoff vote on Wednesday.

Japan’s Parliament will hold a special session early next month to officially select the new prime minister. Given that the Liberal Democrats control the legislature, Kishida’s appointment is all but guaranteed. He will then lead the party in a general election to be held by the end of November.

What’s next: By going with the safe pair of hands, the party seemed to demonstrate its confidence that it could win the election despite choosing a leader with lackluster public support. Voters have become frustrated with the government’s handling of the pandemic.

Health officials in the country recorded the lowest number of new daily coronavirus infections and deaths in about six months this week.

There were 179 Covid-related deaths on Tuesday, a far cry from the 4,000 recorded in May, when the country was overwhelmed by a devastating wave of infections. India reported 18,870 new infections on Wednesday. Though the figures have underestimated the virus’s toll in the past, the new figures suggest a positive trend.

The government has powered a vast vaccination drive, reaching remote areas. About 234 million people of India’s population of 1.4 billion are fully vaccinated, with another 409 million partly vaccinated.

United Airlines is firing about 600 employees for refusing to comply with its vaccination requirement.

Will Vietnam factory closures ruin Christmas in the U.S.?

Vietnam has grown in recent years to become the second-biggest supplier of apparel and footwear to the U.S. after China. Many retailers moved manufacturing there amid major tariffs on China.

While Vietnam was not hit hard during the first wave of the coronavirus, the surge of the Delta variant has forced factories to shut down. With the holiday season fast approaching, many American retailers are expecting shortages of goods, higher prices and higher shipping costs.

Details: The clothing retailer Everlane said it was facing delays of four to eight weeks. Nike cut its sales forecast last week. And Restoration Hardware pushed a new collection to next spring. All cited the factory closures.

Evergrande made a deal with the Chinese state-owned Shengjing Bank to sell a stake it held for about $1.5 billion, with the proceeds going toward paying down its debts.

The Daintree Rainforest was one of four national parks in Australia that were returned to the Aboriginal communities under an agreement signed with the Queensland state government.

The 12-month-long talks on the release of a Chinese tech executive and two Canadians boiled down to one big dispute: whether Meng Wanzhou, a Huawei executive, would admit wrongdoing.

A Sri Lankan family that sheltered the former National Security Agency contractor Edward Snowden after he fled to Hong Kong in 2013 has been given asylum in Canada, an aid group supporting the family said.

Oil prices reached a three-year high, partly because of hurricane damage in the Gulf of Mexico.

It is too early to tell whether Germany’s election results signal a shift left in European politics, but the results illustrate a fragmentation in politics.

The gunman who killed five people at a Maryland newspaper in 2018 received a life sentence.

The Philippine boxing great Manny Pacquiao, who won titles in a record eight weight classes over a 26-year career, is retiring and turning his attention to a bid for the presidency of the Philippines. He has openly feuded with the country’s current president, Rodrigo Duterte.

More than 20 animals and one plant on the endangered species list are now extinct, U.S. wildlife officials said Wednesday. Their stories hold lessons about a growing global biodiversity crisis.

The ivory-billed woodpecker is gone forever, according to U.S. officials. So is the Bachman’s warbler, a yellow-breasted songbird that once migrated between the Southeastern U.S. and Cuba. The song of the Kauai O’o, a Hawaiian forest bird, exists only on recordings.

A million species face the threat of extinction — many within decades.

Many of the species were likely extinct, or almost so, by the time the Endangered Species Act passed in 1973, so perhaps no amount of conservation would have been able to save them.

Scientists do not declare extinctions lightly. It often takes decades of fruitless searching. One federal biologist who declared the woodpecker extinct said, “That was probably one of the hardest things I’ve done in my career. I literally cried.”

The latest James Bond adventure, “No Time to Die,” finds its hero in a somber mood, our reviewer writes.

Here’s how to protect yourself from “stalkerware,” invasive apps that log what you type.

Here’s today’s Mini Crossword, and a clue: Bend out of shape, as wood (four letters).

That’s it for today’s briefing. See you next time. — Melina

P.S. Katrin Bennhold, our Berlin bureau chief, joined Amanpour on CNN to talk about the legacy of Germany’s Chancellor Angela Merkel as she prepares to leave office after 16 years.

The latest episode of “The Daily” is about Britney Spears.

You can reach Melina and the team at [email protected].