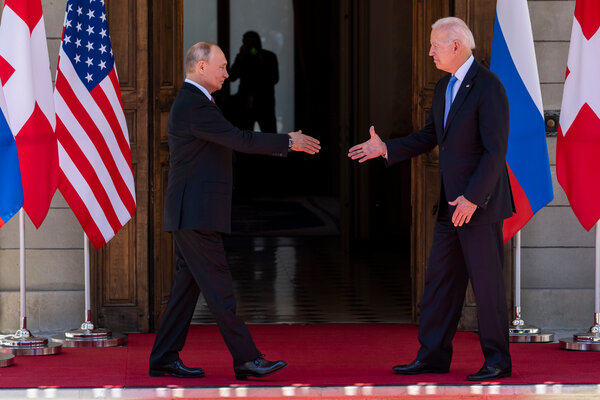 Putin and Biden’s meeting in Geneva

President Biden met with President Vladimir Putin at an 18th-century Swiss villa in Geneva yesterday, in an encounter described by the U.S. leader as “positive” and by Putin as “constructive.” Here are the latest updates.

Among the outcomes were agreements to open U.S.-Russia talks on cybersecurity and arms control and for ambassadors to return to their posts in Moscow and Washington. It was clear, though, that on issues ranging from cyberattacks to human rights, they remain profoundly divided.

Cybersecurity worries: Putin denied Russian responsibility for a surge in cyberattacks against U.S. institutions and rebuffed U.S. criticism of human rights abuses. Biden said he had handed the Russian leader a list of 16 examples of “critical infrastructure” that were “off-limits” to cyberattacks, and said he made clear that if they were attacked, “we have significant cyber capabilities” and would respond “in a cyber way.”

Impressions: “I did what I came to do,” Biden said after the summit. Speaking at a separate news conference, Putin said: “I think that in this situation, there can’t be any kind of family trust. But I think we’ve seen some glimmers.”

A more normal summer for Europe

As the weather warms and coronavirus case numbers continue to fall, vaccine rollouts in Europe could usher in a more normal summer and help bolster struggling tourism industries in countries like Spain and Greece.

U.S. tourists who are fully vaccinated may be allowed back into the E.U. as early as Friday, though each country has the right to tailor those travel measures or add additional requirements. For now, noncitizens are not able to visit the U.S. from the E.U.

Travel from outside the bloc was practically suspended last year to limit the spread of the coronavirus, with the exception of a handful of countries.

Vaccine passport: The E.U. is finalizing its Covid certificate system, which is supposed to become operational July 1. Fifteen member countries have already started issuing and accepting the certificate.

A Covid vaccine developed by the German company CureVac performed poorly in a clinical trial, with an estimated efficacy of just 47 percent.

A trove of material released by the British prime minister’s former chief aide, Dominic Cummings, showed a government in chaos as the pandemic exploded last year.

France will end a mandate on mask-wearing outdoors earlier than anticipated and lift an increasingly unpopular nighttime curfew that has lasted for months.

The falling birthrate in the U.S.

Women of all classes are increasingly prioritizing career goals in the U.S., resulting in the slowest population growth in the country since the 1930s. According to a Times analysis, the birthrate is falling fastest in places with the greatest job growth — where women have more incentive to wait.

While the annual fertility rate may be dropping — births have fallen for six straight years and declined precipitously during the pandemic — more women are mothers. The share of women who have children by the end of their reproductive years has been climbing.

Hispanic women, who once had by far the highest fertility of any major racial or ethnic group, have had the single largest drop of any group, more than a third since 2007.

By the numbers: Since 2007, the birthrate for women in their 20s has fallen by 28 percent, and the biggest recent declines have been among unmarried women. The only age groups in which birthrates rose were women in their 30s and 40s — though even those began to decline over the past three years.

News From the Middle East

Suspicions that Benjamin Netanyahu, the former Israeli leader, may not plan to leave the official prime ministerial residence where he has lived for the past 12 years have been bolstered this week. Above, protesters filled the streets outside the residence in Jerusalem in December.

International mediators rushed to calm tensions between Israel and Hamas on Wednesday, hoping to broker a longer-term truce after an eruption of hostilities overnight.

The Pentagon is developing a proposal to send dozens of Special Forces trainers back to Somalia to help local forces combat Al Shabab, the terrorist group affiliated with Al Qaeda. Above, the aftermath of a Shabab attack in January on a hotel in Mogadishu.

Prime Minister Janez Jansa of Slovenia, which will take on the E.U.’s rotating presidency next month, is using what press freedom groups call Trumpian tactics as he takes aim at the media.

The Times reporter Nicholas Casey spent decades searching for the mysterious father who vanished when he was 7 years old. “I spent much of my life imagining who I was — and then becoming that person — through vague clues about who my father was,” he writes, in this moving essay.

Maneskin was little known outside the band’s native Italy before they won this year’s Eurovision Song Contest, catapulting them in front of 180 million viewers. The winning song, “Zitti e Buoni,” has now been streamed on Spotify more than 100 million times.

But can they keep it up? Eurovision acts typically disappear from the spotlight as soon as the competition wraps, yet Maneskin’s members, the oldest of which is 22, are hoping to build upon their existing fame and newly won international interest to become a rare long-term Eurovision success story, as our reporter Elisabetta Povoledo writes from Rome.

“For us,” the bassist Victoria De Angelis said in a recent interview, “music is passion, fun, something that lets us blow off steam.” Since their founding in 2015, the band has gone from busking to high school gigs to small-time battle of the band competitions, before performing on the 2017 Italian edition of the talent show “The X Factor.”

Though they didn’t win, they captured the hearts of the Italian viewing public, as well as the attention of Veronica Etro, of the fashion brand Etro, which now dresses them and helps with their fashion-forward, sometimes gender-bending image.

Their success, said Manuel Agnelli, one of the “X Factor” judges, comes at least as much from who they are as from the music they make: “I saw in them characteristics that can’t be taught, it’s something you’re born with, it’s personality.”

Try fries loaded with tahini yogurt and smoky-sweet nuts. It’s a great one to dig into and share.

Check out new and noteworthy titles, including a book on Edgar Allan Poe’s fascination with science.

Experts say couples can emerge from the pandemic stronger than ever by learning from the past and looking toward the future. Here’s where to start.

That’s it for today’s briefing. Thanks for joining me. — Natasha

P.S. Chris Buckley, our China correspondent who was forced to leave the country last year, was awarded the Don Bolles Medal for “extraordinary courage in standing up to intimidation or efforts to suppress the truth.”

The latest episode of “The Daily” is about the war in Ethiopia’s Tigray region.

You can reach Melina, Matt and the team at [email protected]