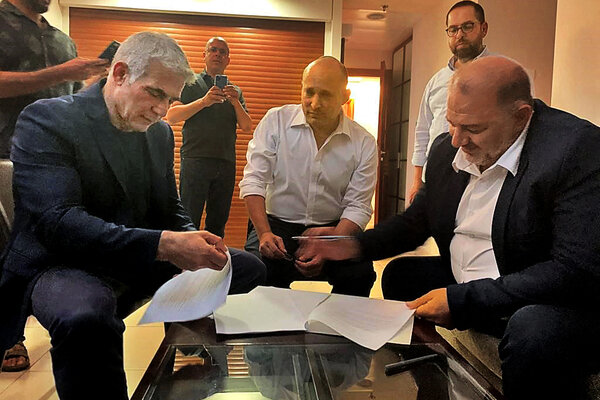 Israeli opposition parties announced last night that they had reached a coalition agreement to form a government and oust Benjamin Netanyahu, the longest-serving prime minister in Israeli history and a dominant figure who has pushed his nation’s politics to the right.

The new coalition is an unusual and awkward alliance between eight political parties from an array of ideologies, from the left to the far right. While some analysts have hailed its breadth, others say its members are too incompatible for their compact to last and consider it the embodiment of Israel’s political dysfunction.

The alliance will include Raam, an Arab Islamist party. The agreement “secures the position of the Arab parties as an influential and legitimate player in the political arena,” the party said in a statement.

The U.S. push for a global tax

Janet Yellen, the U.S. Treasury secretary, will meet tomorrow and Saturday with Group of 7 finance ministers in Britain to secure a broad agreement that would put an end to global tax havens and establish a global minimum tax.

Countries such as Ireland have resisted such a pact for years, but the Biden administration has made it a priority as it moves to increase corporate taxes domestically. Canada, Italy and Japan have already joined the U.S. in backing a 15 percent minimum corporate tax plan, but Britain has not yet endorsed it.

Yellen has said the effort is aimed at ending a “race to the bottom” in which countries cut their tax rates to entice companies to move headquarters and profits across borders.

Separately, the U.S. moved closer to imposing tariffs on certain goods from six countries in retaliation for taxes those nations have imposed on digital services offered by tech companies like Facebook, Amazon and Google.

Facing his July 4 goal of getting 70 percent of U.S. adults vaccinated against Covid-19, President Biden announced a batch of new initiatives yesterday, including free child care for parents who are getting their shots and on-site vaccination events at Black-owned barbershops.

The aggressive campaign also includes sweeteners from sports leagues, like free tickets to the Super Bowl and to Major League Baseball games, and from private companies. United Airlines is offering a year of free flights in a sweepstakes open only to vaccinated Americans, and Anheuser-Busch has promised free beer to adults on Independence Day if the nation meets the president’s goal.

By the numbers: Currently, 62.8 percent of adults in the U.S. have received at least one shot, and 12 states have passed the 70 percent mark. Still, as employers lift mask policies, many workers feel exposed.

Some countries in Asia and South America are having their worst outbreaks yet. The emergence of coronavirus variants and the global gap in access to vaccines have plunged parts of the world back into the anxious stages of Covid-19.

In China, a 41-year-old man has become the first known human to be infected with a strain of bird flu known as H10N3 — a development that experts are monitoring because of a continued risk of pandemic flus.

Facing vaccine shortages, Canada’s immunization advisory body is recommending that some Canadians follow up their AstraZeneca shots with a different vaccine on the second dose.

Pandemic stimulus checks in the U.S. substantially reduced food shortages, depression and other measures of hardship.

Spanish officials say Morocco increasingly sees migrants as a kind of currency to extract financial concessions from Madrid after it let up to 12,000 into a Spanish enclave in North Africa over two days.

An opposition leader in Belarus stabbed himself in the throat with a pen during a court hearing after claiming that investigators had threatened to prosecute his family if he did not plead guilty.

To meet a jump in demand, Portugal’s bike-making industry is building new factories, hiring workers and dealing with shortages of parts.

Production began to resume at nine U.S. beef plants after a cyberattack on JBS, the world’s largest meat processor, forced them to shut down.

Iran’s largest naval ship sank after catching fire in the Gulf of Oman near a major shipping lane, just as Iran and the U.S. have been negotiating a possible return to the 2015 nuclear agreement.

The novel “At Night All Blood Is Black,” by the French-Senegalese author David Diop, won the International Booker Prize, the prestigious award for fiction translated into English.

A new, heavily annotated translation of Adolf Hitler’s “Mein Kampf” was published in France. It aims to break down his hate-filled, anti-Semitic ideology with expert analysis.

British archaeologists uncovered more than a dozen decapitated skeletons in Cambridgeshire, a discovery that may shed light on how the ancient Romans used capital punishment in Britain.

Can therapy by bot make people understand themselves better? Can it change long-held patterns of behavior through a series of probing questions and reflective exercises? Or is human connection essential to that endeavor?

Sports stars and the news media

Naomi Osaka dropped out of the French Open this week after she announced that she would not participate in postmatch news conferences — and was immediately fined by tennis officials and threatened with further punishment. She did so, she explained, because hostile questions from journalists had exacerbated her struggles with depression.

The conflict has highlighted two broader issues: the increased attention on athletes’ mental health and the shrinking power of the traditional news media. In making herself vulnerable, Osaka joined other noteworthy athletes in pushing a once-taboo subject into the open.

“There’s more acceptance of the fact — and more understanding of the fact — that mental health is a real thing, and in the athletics realm, it takes serious bravery for these high-profile athletes to come out and use the word ‘depression’ or use the word ‘anxiety,’” said Jamey Houle, the lead sports psychologist at Ohio State.

Osaka’s decision has prompted nuanced reflections from sportswriters. Writing in The Athletic, Kavitha Davidson acknowledged why it’s important for athletes to speak with the news media: “In order to properly do our jobs, and to properly serve the public good, we need access to athletes; we need the filter of reporters to ensure that every word you read isn’t just glorified P.R.”

But, she added, “There’s a reckoning that still needs to be had about the way we’ve covered women players and players of color,” who are often “subjected to vacuous questioning.”

Kurt Streeter, in The Times, saw Osaka’s announcement as yet another lesson in the increasing power of athletes to own their messages and set their terms. “The days of the Grand Slam tournaments and the huge media machine behind them holding all of the clout are done,” he writes.

This airy strawberries and cream cake is made to share.

What to Listen to

Take five minutes to fall in love with percussion.

Here’s today’s Mini Crossword, and a clue: Cotton candy is made of it (five letters).

That’s it for today’s briefing. Thanks for joining me. — Natasha

P.S. The word “greynaissance” — from an article about how older people are reshaping Korean culture — appeared for the first time in The Times this week.

The latest episode of “The Daily” is about Senator Joe Manchin, a centrist lawmaker who often decides which way a vote will go.

Sanam Yar contributed to today’s Arts and Ideas. You can reach Natasha and the team at [email protected].