We’re covering a mass exodus from Afghanistan, and the latest from the Tokyo Olympics. 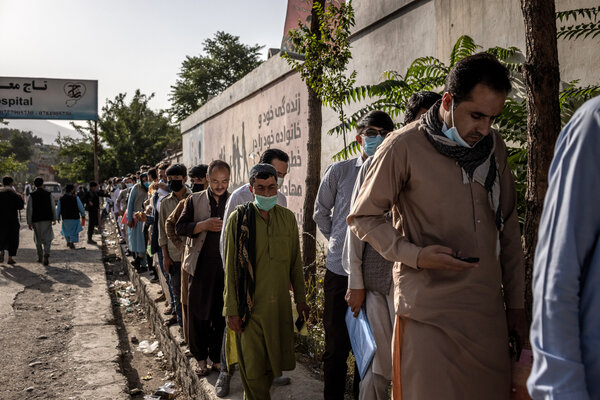 A mass exodus is unfolding across Afghanistan as the Taliban press on with a military campaign and the U.S. withdraws. At least 30,000 Afghans are leaving each week and many more have been displaced.

With more than half the country’s 400-odd districts now controlled by the Taliban, fears of a harsh return to extremist rule or a civil war have taken hold. Aid agencies warn that the sudden flight is an early sign of a looming refugee crisis.

While many of the displaced have flooded into makeshift tent camps or crowded into relatives’ homes in cities, thousands are applying for visas. The first group of Afghans promised refuge by the Biden administration for helping the U.S. during the war landed on American soil on Friday.

Quotable: “I’m not scared of leaving belongings behind, I’m not scared of starting everything from scratch,” said Haji Sakhi, who has fled Afghanistan once before and has applied for Turkish visas. “What I’m scared of is the Taliban.”

The latest: Fighting between Taliban militants and government forces was raging on Sunday near three major cities in the south and west, the BBC reported.

The highly contagious Delta variant is now responsible for almost all new Covid-19 cases in the country. In counties where vaccination rates are low, cases are rising fast, and deaths are also on the rise.

Even as cases rise, the U.S. is wasting vaccine doses. Data from 10 states showed that more than one million doses have gone to waste since the U.S. began administering Covid-19 vaccines in December.

Much of the loss has come as demand for inoculations has plummeted, with the daily rate of vaccinations in the U.S. now at less than one-fifth of its peak average of 3.4 million shots, reached in mid-April.

Among the unvaccinated in the U.S., there are generally two groups: Those who aren’t motivated enough to get it, and those who are adamantly opposed. But health officials are making progress among the undecided. In a sign of hope, states with the highest number of virus cases also had the highest vaccination rates for the third consecutive week.

For the third week in a row, thousands of people in France protested the government’s vaccine pass system.

Parts of the Australian state of Queensland were under an emergency three-day lockdown that began on Saturday after the authorities reported six virus cases.

Russia’s athletes are competing at the Tokyo Games in unmarked uniforms, without the country’s flag, as the Russian Olympic Committee team.

The ban on Russian symbols stems from a doping scandal, but the downgraded presence is not bothering many Russians. Spectators at home are feeling pride after the Russian athletes racked up 12 gold medals, 19 silver and 13 bronze.

“Will this stop our guys?” Tina Kandelaki, a social media influencer, wrote. “No. The Olympics become one of those situations when you want to prove and show to everybody that you are Russian.”

In other Olympic news:

Lamont Marcell Jacobs of Italy got gold in the men’s 100-meter dash, finishing in 9.80 seconds. In the women’s, Jamaican runners swept all the medals.

Rebeca Andrade of Brazil took home her nation’s first gymnastics gold for the vault, and Nina Derwael of Belgium won the top medal in the uneven bars final.

In tennis, Alexander Zverev of Germany defeated Karen Khachanov of Russia, 6-3, 6-1, to win the men’s singles.

Myanmar’s junta leader extended the state of emergency for another two years.

The police in Beijing have detained Kris Wu, a popular Canadian Chinese singer, on suspicion of rape. He is the most prominent figure in China to be detained over #MeToo allegations.

Hong Kong authorities are clamping down on universities, and in particular its student activists. Student groups are wondering how much longer they will exist.

Prime Minister Jacinda Ardern of New Zealand formally apologized for the Dawn Raids of the 1970s, when Pacific Islanders were targeted for deportation during an immigration crackdown.

From Around the World

The Bootleg Fire in the U.S. Northwest has consumed a wide swath of forest in southern Oregon — an area the size of Portland, Seattle, Sacramento and New York City combined. “It looked like an atomic bomb,” one resident said of the aftermath.

Former President Donald Trump ended the first half of 2021 with a war chest of over $100 million, records show.

Weeks after the riots in May in Israel’s mixed towns, the veneer of coexistence has been shattered to expose deep resentment between Jewish and Palestinian citizens.

In an interview with The Times, President Kais Saied of Tunisia pledged that he would not strip away hard-won freedoms in the country. “‘Why do you think that, at 67, I would start a career as a dictator?’” the president said, quoting Charles de Gaulle.

One year after the Beirut explosion, we talked to survivors to see how their lives changed. “I am not the same person,” one of them said.

South Africa is home to around a third of all succulent species, but poachers are posing a threat. Conophytum, a type of flowering plant that consists of over 100 species — several listed as endangered — is the latest victim of a global wave of succulent poaching driven by surging global demand.

Who gets to decide which outfits are appropriate for athletes? It’s usually not the athletes themselves. But this year, some have rebelled.

Just before the Games, the European Handball Federation fined members of the Norway women’s team for wearing hot pants rather than the required bikini bottoms. (Their male counterparts wear voluminous shorts.) In Tokyo, the German women’s gymnastics team defied tradition by wearing ankle-length unitards to send a message “against sexualization in gymnastics.”

Their protest registered as “a subversive sensation,” the sports columnist Sally Jenkins writes in The Washington Post, and “tells you just how little Olympic competitors own their otherwise powerful forms.” The Times fashion critic Vanessa Friedman points out that similar questions arise in many workplaces. “Individuals have increasingly rebelled against the traditional and highly gendered dress codes imposed on them.”

Rebecca Liu, writing in The Guardian, describes how she was drawn as a child to the dazzle of rhythmic gymnastics. “Did I, at six — at seven, at eight, at nine — ever sit down and think, ‘Yes, I want to embody a conventional vision of femininity in the uncanniest and most unsettling of ways?’” she writes. “No. I had simply wanted to be pretty.”

You don’t need much for this freestyle roasted chicken parm.

What to Listen to

Tracks from Silk Sonic, Bomba Estéreo and more are featured on our pop critics’s latest playlist.

When work weighs you down, take a day off to protect your mental health.

That’s it for today’s briefing. See you next time. — Melina

P.S. John Branch, one of our reporters covering the Tokyo Olympics, wrote about what the Summer Games are missing: people.

The latest episode of “The Daily” is about Simone Biles’s decision to drop out of the Olympics.

Natasha Frost wrote the Arts and Ideas section. You can reach Melina and the team at [email protected].