TikTok negotiations, U.S. in Taiwan, Aleksei Navalny: Here’s what you need to know.

We’re covering growing concerns about a virus uptick in Europe, a backlash over the TikTok deal in the U.S. Congress and a visit by a U.S. envoy to Taiwan as U.S.-China tensions simmer. 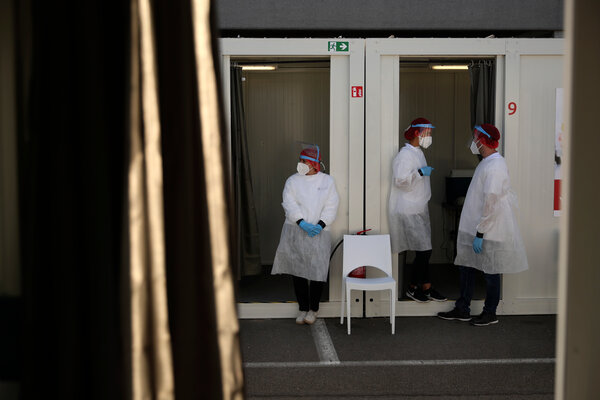 ‘Alarming rates of transmission’ in Europe

The World Health Organization warned of a resurgence of the coronavirus across Europe, but said that transmission could be contained by local measures rather than national lockdowns.

“We have a very serious situation unfolding before us. Weekly cases have now exceeded those reported when the pandemic first peaked in Europe in March,” Hans Kluge, the W.H.O.’s regional director for Europe, said on Thursday.

Alarming numbers: The number of cases has increased by more than 10 percent in the past two weeks in more than half the countries of Europe. In seven countries, the number of cases has doubled. “Although these numbers reflect more comprehensive testing, they also show alarming rates of transmission,” he said. The region has recorded at least 220,000 deaths from the virus.

India reported 97,894 new coronavirus infections on Thursday, its highest one-day increase. The country ranks second in the number of cases after the United States, according to a New York Times database.

New Zealand has entered its first recession in a decade. New data showed that the economy shrank 12.2 percent in the second quarter, the country’s biggest fall on record.

Prime Minister Scott Morrison of Australia said Thursday that he wanted to increase the number of people who can enter the country each week by about 2,000 starting at the end of next week. State governments would have to allocate more hotel rooms for quarantine.

U.S. lawmakers are up in arms about TikTok

A backlash is forming in Washington to TikTok’s proposal to bring on Oracle as a technology partner and allow the Chinese-owned social media app to continue operating in the United States.

Some Republican senators said any deal that left ByteDance, the Chinese owner, in control of the code or algorithms that run the app would fail to address national security concerns. One senator went as far as to say that the app should be banned altogether in the U.S.

Latest: The negotiations were thrown into further disarray when President Trump said he wasn’t sure whether he would sign off on any proposal. “I’m not prepared to sign off on anything. I have to see the deal,” he said on Wednesday. He said he was “not going to be happy” if TikTok remained largely owned by a Chinese company.

Bigger picture: People involved in the negotiations are exasperated, our DealBook reporters write. Asked what will happen next, one source sighed: “Who the hell knows?”

A U.S. visit to Taiwan, and a warning from China

A U.S. envoy arrived in Taiwan on Thursday to attend a memorial service for former President Lee Teng-hui. The Taiwanese Foreign Ministry said that the envoy, Keith Krach, was the highest-level official from the State Department to visit the island in decades.

China responded to the news of Mr. Krach’s visit by sending two anti-submarine aircraft off the island’s coast, according to the Taiwanese Defense Ministry. The planes were warned off by the Taiwanese Air Force, it said.

Details: Though the focus of the visit was the memorial service, Mr. Krach will also discuss economic issues and meet with President Tsai Ing-wen on Friday.

If you have 9 minutes, this is worth it

A Marine killed a transgender woman. Why is he free?

At 26, Jennifer Laude was full of joy, fearless and beautiful, her friends and family say. She died at the hands of an American she had met at a nightclub, a Marine who was in the Philippines for joint military exercises. After discovering that Laude was transgender, Lance Cpl. Joseph Scott Pemberton choked her and pushed her head into a toilet bowl until she drowned.

Human rights advocates had been fighting to hold American service members accountable for violence against women in the Philippines for years. The Marine’s conviction seemed to be a step in the right direction. But on Sept. 13, Pemberton was put aboard a U.S. military plane and flown out of the Philippines, a free man. He had served less than six years. Our reporter looked at why he was freed and what the case means for people in the Philippines.

Aleksei Navalny: Aides of the Russian opposition leader said he was poisoned at his hotel in Siberia, and not at the airport as originally believed. They collected items from his room as soon as he fell ill, according to a video posted on his Instagram account, and found that a water bottle was tainted with a highly toxic nerve agent.

West Coast fires: Firefighters were making progress against several major blazes but the authorities in California and Oregon warned that conditions could allow fires to quickly spread again or start anew around the states. A tale of survival has emerged from an Oregon town devoured by fire.

Snapshot: Above, the Greek island of Chios, where everyone knows if you have Covid-19. The island of 50,000 residents has had about 30 cases since the outbreak began, and no deaths. The main fear on Chios, our reporter found, was of outsiders like her bringing the virus in.

What we’re reading: This essay in The Cut by the model Emily Ratajkowski about what happens when you lose control of your own image. Vanessa Friedman, our fashion director and chief fashion critic, writes that the piece “is unflinching and unapologetic, and adds a new twist to the discussion around models’ rights as engendered by #MeToo.”

Read: Here’s one for your reading list: Former President Barack Obama’s new memoir, “A Promised Land,” will be published in November. It’s the first of two volumes and will be released in 25 languages, including Chinese, Arabic and Vietnamese.

Watch: “I’ve Got Issues,” a surreal comedy of despair and deliverance, “isn’t a pretty picture, in either sense of the word,” our reviewer writes, “but it is a profoundly empathetic one.”

It’s almost the weekend! At Home has lots of ideas on what to read, cook, watch and do while staying safe at home.

There has been speculation throughout the pandemic about why some communities seem to be hit harder than others or why a country might suddenly start seeing a greater rate of fatality, including hypotheses about different strains of the virus and dubious claims about how Covid-19 affects different demographic groups.

Donald G. McNeil Jr., a science and health reporter for The Times who covers infectious diseases and global health, said that differences in outbreaks were often simply a matter of time. “Once a case, or a few cases, arrive, it can spread exponentially,” he said.

“But with borders as nonporous as they are these days, it may take days or weeks for one or a few cases to arrive in a new country.”

The severity of an outbreak might also reveal something about a particular place, its approach to containing the virus or the population in the line of fire, he said.

For instance, in Belgium, which had the highest death rate per capita on the European continent, The Times reported that the authorities mostly left nursing homes to fend for themselves: During the peak of the crisis, from March through mid-May, nursing home residents accounted for two out of every three coronavirus deaths.

According to a Times database, one of the countries logging the highest rates of deaths per capita is Peru, which is suffering a shortage of oxygen to administer to patients. “Up to 20 percent of all symptomatic Covid cases need oxygen to survive,” Donald said. “In Peru, the two companies that made oxygen served only the lucrative private hospitals, so there was a huge oxygen shortage there; plus much of the population lives at high altitude where oxygen is short anyway.”

We’ll have more on that topic soon.

Thank you
To Theodore Kim and Jahaan Singh for the break from the news. Natasha Frost wrote today’s Back Story. You can reach the team at [email protected]

P.S.
• We’re listening to “The Daily.” Our latest episode is about the refugee crisis in the Moira camp on the island of Lesbos.
• Here’s our Mini Crossword, and a clue: Apples and oranges (five letters). You can find all our puzzles here.
• The Times won three Deadline Club awards from the New York chapter of the Society of Professional Journalists, including an award in the Spot News Photo category for the iconic photo by Matthew Abbott of a kangaroo hopping through the bush fires in Lake Conjola, Australia.