A fourth vaccine approved by the E.U.

We’re covering the E.U.’s authorization of the Johnson & Johnson vaccine, the U.S. stimulus bill and a JPG file that sold at auction for $69 million. 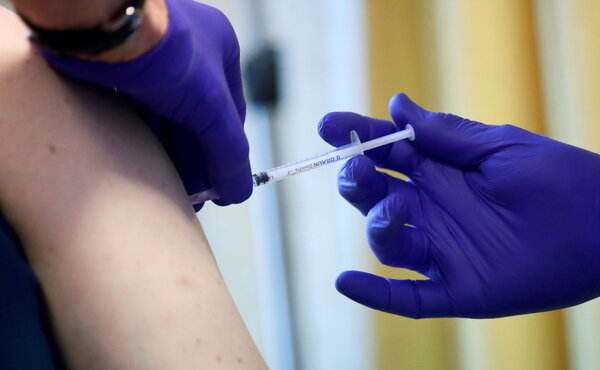 The European Union authorized use of the Johnson & Johnson vaccine for people 18 and older on Thursday, opening the door for the delivery of 200 million doses to the 27-country bloc and potentially speeding up its sluggish vaccination efforts.

The vaccine can be stored in regular refrigerators for up to three months and requires only one shot. It is the fourth to be approved by the E.U.’s regulatory agency. Three more vaccines — Novavax, CureVac and Sputnik V — are undergoing a rolling review, a preliminary step that could lead to approval.

The bloc also said on Thursday that it would extend until June a mechanism that lets member states block the export of vaccines made within the E.U. if the manufacturers have not filled all their orders at home.

Amid swirling misinformation, Ukraine has struggled to find enough residents willing to get the vaccine. The country’s vaccine hesitancy rate is one of the highest in Europe, even among doctors and nurses.

Coronavirus cases in Germany are ticking up, more than half of them caused by the B.1.1.7 variant first discovered in Britain. “We are seeing clear signs: In Germany the third wave has already begun,” the leading public health official said.

France will relax restrictions on international travel from outside the E.U. “to adapt to the evolution of the global pandemic.”

Denmark, Iceland and Norway suspended the use of the AstraZeneca vaccine after a small number of people developed blood clots. European regulators said there was no evidence the vaccine had caused the clots.

The $1.9 trillion stimulus bill is signed into law

President Biden signed the $1.9 trillion stimulus bill, setting in motion the rollout of $1,400 checks to millions of Americans hit by the pandemic. Sensing increasing optimism, Wall Street rallied for the third day in a row.

In his first prime-time televised appearance since taking office, Mr. Biden directed states to make all adult Americans eligible to be vaccinated by no later than May 1, and he expressed hope for a return to relatively normal life by the Fourth of July.

He warned, however, that a return to normal this summer would require the public to continue to wear masks, maintain social distance and sign up for shots.

Quote: “If we do our part, if we do this together, by July the 4th there’s a good chance you, your families and friends will be able to get together in your backyard or in your neighborhood and have a cookout and a barbecue and celebrate Independence Day,” the president said.

Indigenous peoples call for a rethink on conservation

Dozens of countries hope to hammer out a global agreement to protect at least 30 percent of the planet’s land and water by 2030, designed to keep intact natural areas like old-growth forests and wetlands that nurture biodiversity, store carbon and filter water.

But Indigenous communities, which have successfully protected nature for generations by limiting their exploitation of resources, won’t be voting on the deal, even though several scientific studies show that nature is healthier on the lands that they manage or own. Indigenous-managed lands in Brazil, Canada and Australia have at least as much biodiversity as lands set aside for conservation by federal and other governments.

Historically, conservation efforts have had a troubled record of forcing people off their land. Now, Indigenous leaders view the global push with a mixture of hope and worry.

Quote: “If you’re going to save only the insects and the animals and not the Indigenous people, there’s a big contradiction,” said the head of the Coordinator of Indigenous Organizations of the Amazon River Basin. “We’re one ecosystem.”

If you have 8 minutes, this is worth it

‘A very big silence around race’

Above, the Brixton neighborhood in London. For Black and mixed-race Britons, Meghan Markle’s description of her family troubles in her bombshell interview with Oprah Winfrey this week recalled familiar and often painful experiences that rarely get talked about. (Prince William called the royals “very much not a racist family” in his first public comments after the interview.)

“There is, in Britain, a very big silence around race that, in fact, there isn’t in the United States,” said one professor of postcolonial studies at the University of Cambridge. “The idea that a talk-show host would sit down with a royal couple or anyone and discuss race at length — that’s not actually imaginable in the U.K.”

Myanmar: At least eight people died and 20 more were wounded on Thursday when police officers fired indiscriminately into a cluster of unarmed civilians in the small town of Myaing, as protests against the military coup continued across the country.

Brexit: Almost five years after Britons voted to leave the E.U., the government said it would wave through some goods arriving at British ports from the continent until January 2022 — a tacit admission that it lacks the capacity to perform the border checks required.

George Floyd: Derek Chauvin, the police officer who kept his knee on Floyd’s neck in Minneapolis as the Black man gasped for breath, will face an additional charge of third-degree murder. Chauvin had previously agreed to plead guilty to the charge, before a plea deal was rejected.

Hong Kong: China on Thursday approved a drastic overhaul of the election rules in Hong Kong, which will most likely bar many pro-democracy politicians from competing in elections.

Snapshot: Above, Soraya Hashem, 38, the manager of G Curls, a salon specializing in curls. For decades, Egyptian women diligently straightened their ringlets and waves to fit a Western beauty ideal. But in recent years, curls have sprouted again around the country, a reminder of the subtle shifts in society that many young Egyptians trace to the 2011 revolution.

Buried treasure: A 3,700-year-old silver diadem, found recently in a Spanish dig, adds to a body of evidence that women held significant power in prehistoric Europe.

What we’re reading: This book review in The New Republic that explores how tourism (and our collective disdain for tourists) has shaped our politics, the climate and our personalities.

Watch: In 1995, Matthew Bourne audaciously reimagined the ballet “Swan Lake” with a flock of feral men. A performance is available for streaming.

Find joy in your weekend. At Home has our full collection of ideas on what to read, cook, watch, and do while staying safe at home.

A primer on NFTs

A digital image — known as an NFT — by the artist Beeple sold for $69 million at a Christie’s auction — a record for artwork that exists only digitally.

Last month, someone bought an animated GIF of a flying cat for more than $500,000. So what’s the point of owning them?

It may not make sense to everyone, and it has elements of a financial bubble. It mostly comes down to very expensive bragging rights, as well as the potential of reselling the works for more money.

These rights are known as NFTs, short for “nonfungible tokens.” “It seems crazy to do that for something purely digital that can be easily copied and shared across the internet,” Erin Griffith, a Times tech reporter who has written about the trend, told The Morning newsletter. “But the popularity of NFTs shows that people are willing to pay for special, scarce collector’s items.”

The technology has made it easier for artists, musicians and sports franchises to make money from digital goods. The N.B.A. recently introduced Top Shot, a series of NFTs that turn highlight clips into trading cards. In music, the latest album by Kings of Leon is an NFT.

That’s it for this briefing. See you next week, when we’ll be launching our redesign.

Thank you
Sanam Yar wrote the Back Story. Thank you to Theodore Kim and Jahaan Singh for the break from the news. You can reach Natasha and the team at [email protected]

P.S.
• We’re listening to “The Daily.” Our latest episode contrasts Meghan Markle’s explosive interview with Princess Diana’s BBC sit-down a quarter of a century ago.
• Here’s our Mini Crossword, and a clue: ♠️ (five letters). Find all our puzzles here.
• Michael Paulson, our theater reporter, looked ahead to the return of live stage performances to New York City in this WNYC radio interview.