America’s longest war is over. 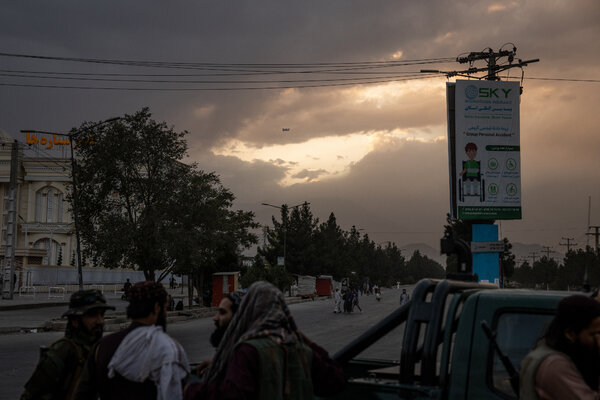 After the attack on Pearl Harbor in 1941, the United States and its allies needed less than four years to vanquish their fascist enemies. After the secession of Southern states in 1860 and 1861, the U.S. spent slightly more than four years defeating the rebellion. After the first battles at Lexington and Concord in 1775, the colonies took about eight years to beat the British and create a new nation.

The war in Afghanistan — which ended yesterday, as the final U.S. troops left — lasted 19 years and 47 weeks, dating to the first bombing of the Taliban on Oct. 7, 2001. It is America’s longest war, far longer than the country’s great victories and longer even than its previous protracted defeat in Vietnam or stalemate in Korea.

Over the past two decades, the U.S. has been able to claim some accomplishments. American troops killed Osama bin Laden (albeit in Pakistan, not Afghanistan) and captured or killed other architects of the 9/11 attacks. Afghanistan temporarily turned into a democracy where schools improved and women could live more freely than before.

Yet the main accomplishments proved fleeting.

For all of the bravery and sacrifice of the Afghan and American troops who fought together, their leaders failed to create an enduring government or functioning military. Despite two decades of work and a couple of trillion dollars spent, the U.S.-backed Afghan government collapsed in a matter of days. The regime was evidently no more enduring than it had been five years ago, 10 years ago — or on Dec. 22, 2001, when Hamid Karzai was sworn in as Afghanistan’s first post-9/11 leader.

Across the span of American history, it’s hard to think of another failed project that lasted so long or cost so much. There have been worse injustices and tragedies in this country, but they were usually deliberate. The U.S. has been attempting to win in Afghanistan for nearly the entire 21st century.

Biden certainly could have overseen a more successful exit than he did, especially if he and his aides had taken more seriously the chances of a rapid Taliban takeover. I also understand that some people believe that an unending, low-level war in Afghanistan was worth the trade-offs. These advocates argue that the number of American soldiers killed each year had fallen into the single digits, while the financial cost was below $20 billion a year (which, by comparison, is a little more than half the country’s foreign-aid budget). In exchange, the U.S. likely could have prevented a complete Taliban takeover and the chaos of the past few weeks.

But it’s worth emphasizing that this option really did mean unending war. After nearly 20 years and no apparent progress toward an Afghan government that could stand on its own, America’s longest war would have continued. It would not have resembled the ongoing U.S. presence in Korea, Japan and Western Europe, where no enemies are launching regular attacks and no American troops are being killed.

It would have involved continued fighting, which has been killing more than 10,000 Afghan troops and more than 1,000 civilians every year. On Sunday, an errant U.S. drone missile may have killed 10 more civilians, including seven children. Continuing the war indefinitely also would have required Biden to renege on Donald Trump’s promise, likely causing the Taliban to intensify its attacks and perhaps raising both the human and financial costs.

Instead, for better and worse, America’s longest war is over.

Jeff Jacoby of The Boston Globe has made the case for staying in Afghanistan, citing rising literacy, falling infant mortality rates and more: “All this was being sustained in recent years, and the Taliban was being held at bay, with just a relative handful of U.S. troops to provide intelligence, logistics, and air support.”

Ross Douthat of The Times’s Opinion section disagrees: For years, the U.S. failure was “buried under a Vietnam-esque blizzard of official deceptions and bureaucratic lies.”

Peggy Noonan of The Wall Street Journal laments Bush’s decision to focus on an invasion of Iraq rather than capturing bin Laden when he was cornered in the Tora Bora region: “What a richly consequential screw-up it was, and how different the coming years might have been, the whole adventure might have been, if we’d gotten it right.”

Alissa Rubin — a Times reporter who covered the war — considers another counterfactual: What if the U.S. had accepted the Taliban’s offer of conditional surrender in 2001? (In a recent Fresh Air interview, the author Steve Coll highlighted the same moment.)

Nearly 2,500 American troops have died fighting in Afghanistan. Here are their names. (That list does not include the 13 killed last week.)

The U.S. and its allies evacuated 123,000 Americans, Afghans and other civilians. But thousands of Afghans desperate to escape remain.

In a swing congressional district in Southern California, voters from both parties say Biden was right to end the war, The Times’s Jennifer Medina reports.

“The military mission is over. A new diplomatic mission has begun.” Here’s Secretary of State Antony Blinken’s speech.

Dozens of members of Congress in both parties have been helping to arrange evacuations.

Hurricane Ida left hundreds of thousands of people in Louisiana without electricity or water.

New Orleans was spared catastrophic flooding, thanks in part to barriers built after Hurricane Katrina.

A new natural gas power plant, meant to power the city in an emergency, did not come to the rescue.

Ida inundated some small towns outside New Orleans: “Every little thing that I owned and had, it’s gone.”

Times photographers are in Louisiana. Here’s what they saw.

The European Union is recommending to reintroduce travel restrictions on U.S. visitors. It’ll be up to the member states to decide whether or not to impose them.

The U.S. Education Department is investigating whether bans on mask mandates in five states violate the civil rights of students with disabilities.

California authorities ordered thousands of people along Lake Tahoe’s shores to evacuate as the Caldor fire intensified. (Track the wildfires in the West.)

Jury selection begins today in the trial of Elizabeth Holmes, the founder of the blood testing start-up Theranos. (These are the key people to know.)

Starbucks workers in the Buffalo area are forming a union and asked to hold a vote in two weeks.

The U.S. Open returned and welcomed spectators. Here are highlights from the first day.

Sleepless nights: What to do when you’re awake at 3 a.m.? Readers offer advice.

Stuff: The world is short of everything. Better get used to it.

Queens cheer: Mets fans booed their players. The team booed them back.

A Times classic: What is your love style?

Throughout her career, Aretha Franklin remained fairly unknowable to the public. “I didn’t make a dent in her armor,” David Ritz, a biographer, once lamented.

Because of this privacy, it’s tough for onscreen portrayals of Franklin to fully capture the artist. The most recent attempt — the film “Respect,” starring Jennifer Hudson — sticks “too closely to Franklin’s own self-image, a narrative that she tightly controlled,” Salamishah Tillet writes in The Times.

The Sydney Pollack documentary “Amazing Grace,” on the other hand, would not have made it to screens if it were up to Franklin, who repeatedly sued to block its release. Filmed in 1972 over two nights in a Los Angeles Baptist church, the movie was released after Franklin’s death. The film, Tillet writes, is “all gospel, a cinematic capturing of spiritual ecstasy and religious exaltation, and a Franklin who surrenders her voice to God, and is at her most sublime.” — Sanam Yar, a Morning writer

Rachael Leigh Cook, the star of millennial classics like “She’s All That” and “Josie and the Pussycats,” is ready for a new chapter.

It’s never too late to ditch the city and run a farm.

World Through a Lens

The pangrams from yesterday’s Spelling Bee were annihilation and inhalation. Here is today’s puzzle — or you can play online.

If you’re in the mood to play more, find all our games here.

Thanks for spending part of your morning with The Times. See you tomorrow. — David

P.S. The Washington Post profiled Maggie Haberman, who went from moonlighting as a bartender to covering the Trump White House.

“The Daily” is about America’s final hours in Afghanistan.

Claire Moses, Ian Prasad Philbrick, Tom Wright-Piersanti and Sanam Yar contributed to The Morning. You can reach the team at [email protected].

Sign up here to get this newsletter in your inbox.